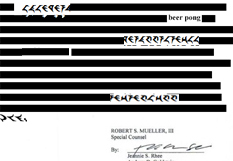 Flagstaff, AZ—The Daily Discord has received a copy of the full Mueller Report from an unreal source. Unfortunately the original document is still mostly redacted. Attorney General William Barr explained how Mueller used large black blocks to actually type stuff into his report. “Intelligence agencies often use a Fed font, or Arial MIBlack,” said Barr. “It’s not uncommon to start with permanent redactions, which can save a lot of embarrassment later. You can also whiz through stuff when you’re in a hurry. I think Mueller actually started this thing last Monday.” The Discord released the full text, so we are asking our 11 fans to please check their spam folders. The report raises many questions, such as: why are the only non-redacted parts in Klingon? How can the only released English words, ‘beer pong’ possibly relate to Mueller’s original mandate? Do Klingons even play beer pong? Conclusions have fallen into two distinctly different camps. Whereas the Republicans remain convinced the leaked document fully vindicates the president, Democrats believe it opens a new line of inquiry into possible collusion between the Trump Administration and Q’ONOS, the Klingon home-world.

Is the only person who could answer any of these questions the late great Gene Roddenberry? What the hell were the Discord photoshoppers smoking when they submitted this stinker of an image? After the conclusion of the Klingon probe, Republicans are vowing to mount their own investigation into Hillary Clinton’s unauthorized contacts with this warlike race on Klingstagram. Last March did Bill Clinton secretly meet with a Klingon ambassador while his Bird of Prey was parked on the tarmac at Skyharbor Airport? The president wants these fictional questions answered.

Shortly after The Discord’s release of the Mueller document, Senator Lindsey Graham (R-SC) asked, “What did the United Federation of Planets know and when did they know it?”