If you haven’t already, please read my blogvesary’s shortsighted ramblings on liberal shortcomings. Kidding, just read this bit and, like a Motel 6 for the cognizant, we’ll leave the bright on for you. I do agree with two of your points, Poke: 1.) Liberals need a meaningful platform and, 2.) I am now a registered Democrat. These are damning in their own right, but they kind of pale in comparison to the whole brewing Trumpocalypse. As usual, every other line of your last post can be broken down into two camps: ‘False’ or ‘You are referring to a republican created trait/policy/weapon/tactic. Liberals are only now learning to implement this scorched Earth schitznik. Hey, maybe you can help us get better at these political ploys? That would be very sporting of you. Right now we’re like a monkey with a gun …so let’s begun. Sorry.

I could write entire articles on each of my blogvesary’s inane points *cough*, but I already have. You do realize that The Discord has a search feature, right? If you just add/replace the word ‘Democrat’ with ‘Republican’, you have rewritten some of my older posts (only in batshit GOP revisionist-history form). Your ilk has attempted to flip the script so many times I think our server’s gonna’ hurl …which reminds me: 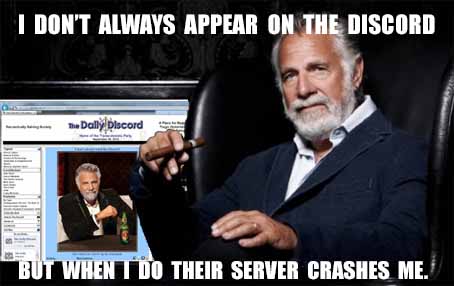 “Politicization of the Justice Department. The Dems are ever more eager to use the courts, IRS, DOJ, FBI, and the CIA to defend their interests and attack their political adversaries to serve their political ends. As the evidence of corruption, strategic leaks, lies, etc… (He then describes all the “illegal” wrongdoings by Strozk, Page, McCabe and company).” -Pokey

This has to be a joke, which is okay because this is a humor site. We have a sitting president who is putting incredible pressure on his own AG to end the investigation of himself, and he has already fired just about everyone else involved (see Mueller’s report on ‘obstruction of justice’ future). If you don’t want to read the whole thing when it’s published, just do a key word search. Kidding, it probably won’t be published. Freedom from Information Act?

Second, per historians and scholars (aka, anyone other than a registered republican), the Justice Department was politicized and weaponized under George W. Bush. It is one of his many lowlights. Check CBS’s The Gutting Of The Justice Department. Here is my articles from the pre-Cheneyistic Period, here and here.

“It is not good enough to say, well, our president would never abuse such powers; the point is, no one should ever wield such power. That’s what checks and balances mean. That is why Gandalf, Galadriel, or Mr. Fabulous would not accept Sauron’s ring of power. There was a Mr. Fabulous in middle-Earth, wasn’t there? I’ll never forget watching C-span in my underwear with a bucket of vodka (the Monday night special) as some senator asked Alberto Gonzales, ‘Aren’t you concerned that these expanded powers in the wrong hands might be abused?’ He responded, ‘Yeah. Like I hope the next dude is, like, righteous’ …or something equally as inane.”  (Me-2008)

I do not have the partisan filter you think I do, Pokey, and yours is much worse than you think it is. That’s been a main theme throughout my posts—a theme that forever falls on deaf peers. Then again, insight and self-reflection were never the GOP’s strong suit. Whereas there’s copius evidence of Dubya’s DOJ antics, there’s only meaningless conjecture against Obama. You’re forgetting the rule: when something is wrong in the world just look for the associated republican policy or precedent. If a Democratic president is ever discovered to be doing something shady, republicans made it legal. You’ll be much better at this when you have the answer key.

You claim all of these FBI wrongdoings surrounding the 2016 election are ‘illegal’. I am not defending FBI antics, I am referring to the findings of the actual investigation into this matter …you know, the one conducted by republicans, during a republican super-majority, on mostly republican federal agents. For actual illegal shenanigans, check out what liberals are looking at.

Really? This must be another attempt at humor. Sure the left woke up, tough shit. You should have let them sleep in; they’re millennials, after all, so waking them up needlessly makes them hangry. What you’re describing, which is essentially a political hatchet job, has been created, fomented and perfected by republicans. It’s their Modus Operandi and will continue to be so until they are politically marginalized and/or disbanded (see: every other article I’ve ever written).

Is there a way to post this one upside down Winslow? Holy crap. Again, the people democrats tend to elect do not represent the worst aspects of the political party. Stop seeking the dumbest liberal to quote to make your point and try finding an intelligent republican one. If you haven’t noticed that task is becoming, uh, the Hulk with priapism hard. Whereas picking the most extreme view from the ANTIFA rally is effective on Fox News, it’s not relevant to my party, my ideology and almost any elected progressive’s platform. Trump, on the other hand, openly embraces alt-right and even fascist worldview. Obama, Clinton, Clinton, Biden are all pragmatists. Bush, Trump, Palin, McConnell are all assholes. See the difference?

“The Flippant Dismissal. The Democratic Party is comfortable and eager to accuse their political adversaries of crimes that they then flippantly dismiss. I first noticed this phenomenon….(blah, blah, blah).”  -Pokey

“Ann Coulter is the best at reducing things to one flippant nonsensical remark. A spokesperson for the Tea Party did the same thing recently on Bill Maher. Elliot Spitzer was using the German economy as a model for potential reforms in our own, and this guy responded thusly, “Oh, so you want us to become Germany?” That’s it, the argument reduced to one ridiculous statement. As far as the economy is concerned, YES, we’d like to be Germany!

Here’s the problem: you’re all going to elect the next Bush, willingly and openly, without the benefit of proper lubrication. Ask your doctor if Presidential H is right for you.” (Me-2011)

Even the same language, aka flippant, and a relevant prediction in there to boot (no extra charge). This is the one word answers republican use to avoid debates: Bernie = socialist.  Why not socialism? Socialism = Venezuela. Great Recession = Barney Frank. Deficits = Only exist under Dems. Iraq = pulled out too soon. Trump’s father = didn’t pull out soon enough.

I could go on, but I am choosing not to. I’m pro-choice = baby killers. These are tired, partisan arguments. Something egregious is covered here on The Discord and the same arguments are eventually turned against me, years later. There is a certain amount of partisan antics on both sides, but you can not seriously think liberals are the key offenders on any of your ‘points’. If you are not being programmed by alt-right fascists, than please endeavor to separate yourself from their empty rhetoric …the ideology you save may be your own.

Look, I’m just a spoof news guy, writing this shit on my freetime in a coffeeshop somewhere, and yet I just linked back to insights on these topics from over a decade ago (plus an accurate prediction within a relevant quote). I even predicted liberals would start to employ these republican tactics, so why the surprised face? Yet you remain a staunch advocate of a political party wholly devoid of any such abilities or insights. Doesn’t that bother you? Aren’t you the least bit curious as to why that is?