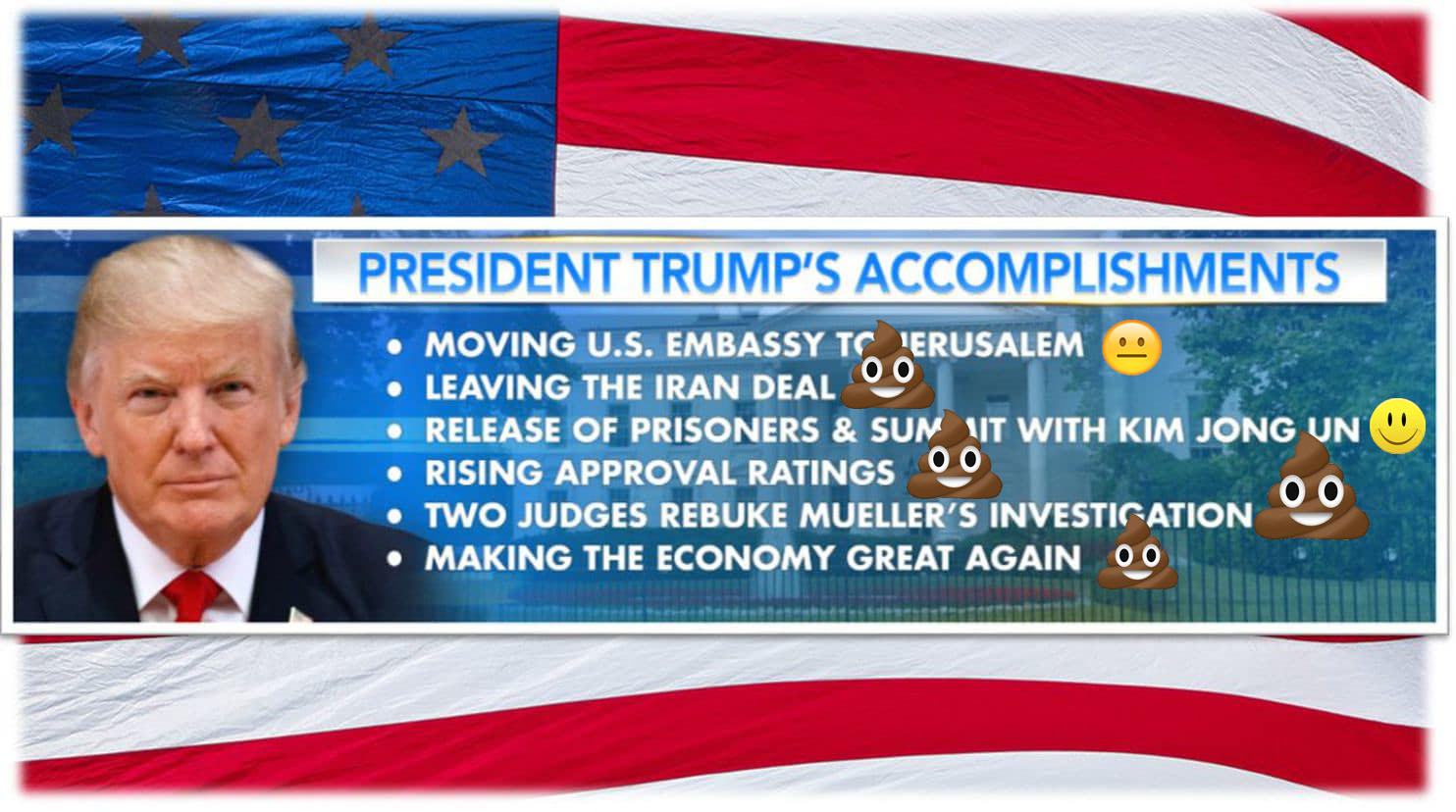 This annoying thing happened online last week. Before I could even answer someone in comment-thread-land, this fella was labeled a troll and banned from the group. Now this was a Facebook group for folks who want to vent about Republicans, so I get it, but let’s never be afraid to counter Republican ignorance with facts wherever and whenever their bullshit surfaces. I realize we will never win hearts and minds, because having them is a prerequisite, but we can’t always retreat to our safe space and our hate spaces. GAB.com’s relationship to the synagogue shooter is the latest example of a weaponized social media forum. I realize there are no easy answers here, because who wants to keep debating delusion (see: my lifework)? So this man/troll/banished fella countered one of my Discord articles with a long list of Trump’s “accomplishments” (not the one above with the added poop emojis). He pasted a much larger pile of Foxal-matter onto that comment thread. Let’s take a look at these gems. This picture (below) was posted on a thread in response to a Discord article that was shared on anti-Trump Facebook group. This list is supposedly courtesy of Sean Hannity but, who cares? It says he “assembled them”, you know, deep in one of Fox News’ scandal factories. Let’s take a closer look at these gems:

Hint of the day: atrocities are not accomplishments. 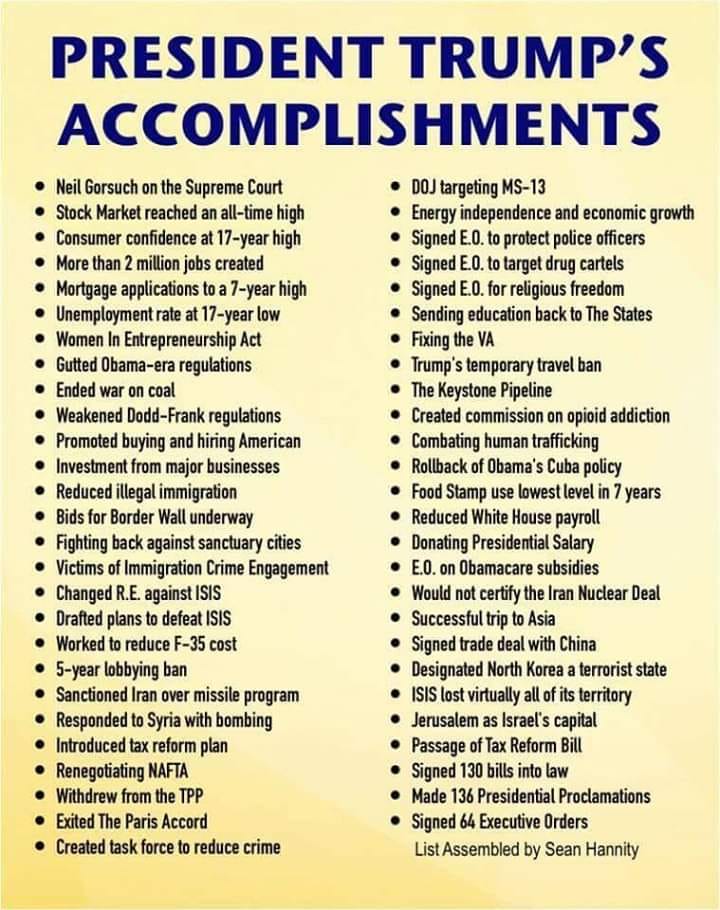 Stock Market All Time High. Great, but Obama had a similar winning streak and just about every economist predicted rosy weather for a time (see: every graph under Obama and every economists prediction, including mine).

“Trump was handed a strong economy and his agenda—namely to not fund anything meaningful, lower corporate taxes and gut industry regs—will pay dividends for a time.” (Zano, 2017)

I personally did not think for a second that gutting regs and endangering our future would hurt businesses in the short term. Did you? The only question was when the man’s inherent stupidity would start to Trump all of the ‘winning’.

Consumer Confidence 17-year High: Misperception is reality these days, isn’t it? …well, it is the way they do it.

Ended The War On Coal. Wow, this is the dumbest one. Kidding. The War on Coal should have started earlier and never should have eased. We are actually exporting death, as increased coal shipments to India may kill hundreds of thousands annually across the globe (Scientific America). It’s a testament to Republican ignorance #BlackLungsMatters?

Weakened Dodd-Frank. So the only safeguard to prevent the next Wall Street shell-game, flimsy as it was, is now gone? This is an accomplishment? Are you a mogul who stands to gain from the next and final collapse or are you just an idiot? [Rhetorical question alert.] This is the dumbest one on the list… still kidding.

Drafted and Planned Defeat of ISIS (& a later one Defeated ISIS): Umm, our general’s timeliness have been on the books for two or three years now. The fall of ISIS was baked into the cake, right on schedule, at least 2 ½ years ago. Here’s me commenting on Juan Cole back in the day:

“Having taken Tikrit, Ramadi, Hit and Fallujah, the Iraqi government has over the past 2 years decisively rolled back Daesh (ISIS). It is now virtually besieged in Mosul, which is landlocked and increasingly surrounded. As a governmental entity, I wouldn’t give Daesh more than a year (Juan Cole 2016).” And here’s my response to this quote, “Juan is overly optimistic. It will probably take a couple of years.”

Fast forward two years later and it’s shifted to Trump’s list of accomplishments like Clockwork Orange? There has been no meaningful deviance in any strategic timelines or policies to defeat ISIS. Oh, with the exception of a little more recklessness permitted, you know, so we kill more civilians and aid ISIS recruitment capabilities. Republicans do try to help the enemy out when and where they can.

Worked to Reduce F-35 Costs: This was a Lockheed Martin planned decrease in production cost, which was first announced in 2016 under then President Coherent, here.

Sanctioned Iran Over Missile Program: Actually he stepped out of the Iran Deal, which, if it collapses, will be among the most egregious things to occur under President Ass-clown Hitler.

Responded to Syria with Bombing: The bombed airport was back in operation less than 48-hours later; hell, the Del Taco down the street was set back further after their ill-fated All You Can Eat Burrito Thursday. As a single act this bombing did nothing, even the few proponents of this strategy said as much.

Introduced Tax Reform Plan: A plan suspiciously similar to Dubya’s, and we all know how that ended.

Energy Independence and Economic Growth: economic growth is great, not the way he’s doing it, but partial credit. Energy independence would be great if it were a tad greener and a smidge more responsible.

[Winslow: Most of this was accomplished by Obama before the Orange Menace arrived.]

Fixing the VA: That’s good. Is it true? In my state the Phoenix VA went from one star in 2016 and 2017 to, uh, one star in 2018. Hmmm. Did he fix any your city? Maybe. Let us know. Where’s that million he personally promised to veterans?

Let’s find one totally good one and call it a day… I-can’t-find-any. The wall that still isn’t up yet and shouldn’t be built, and Mexico won’t pay for it, uh, is that good? The exit from the Paris Accords right before that universal dire climate warning? The Keystone pipeline? Wow, the only way this is going to end on a high note is if Arizona legalizes pot, right now. Wait, targeting MS-13 sounds like a good thing …uh, if you forget the rampant politicization of the issue. Hmmm. Most of the rest of this list is no better than the first half. This it too much bullshit for one article …wait, historically low unemployment rates! I skipped that one! Save and a beauty. I will not argue with that, but maybe Trump’s accomplishments should be a sentence not a list. Anyway, here’s my summary: 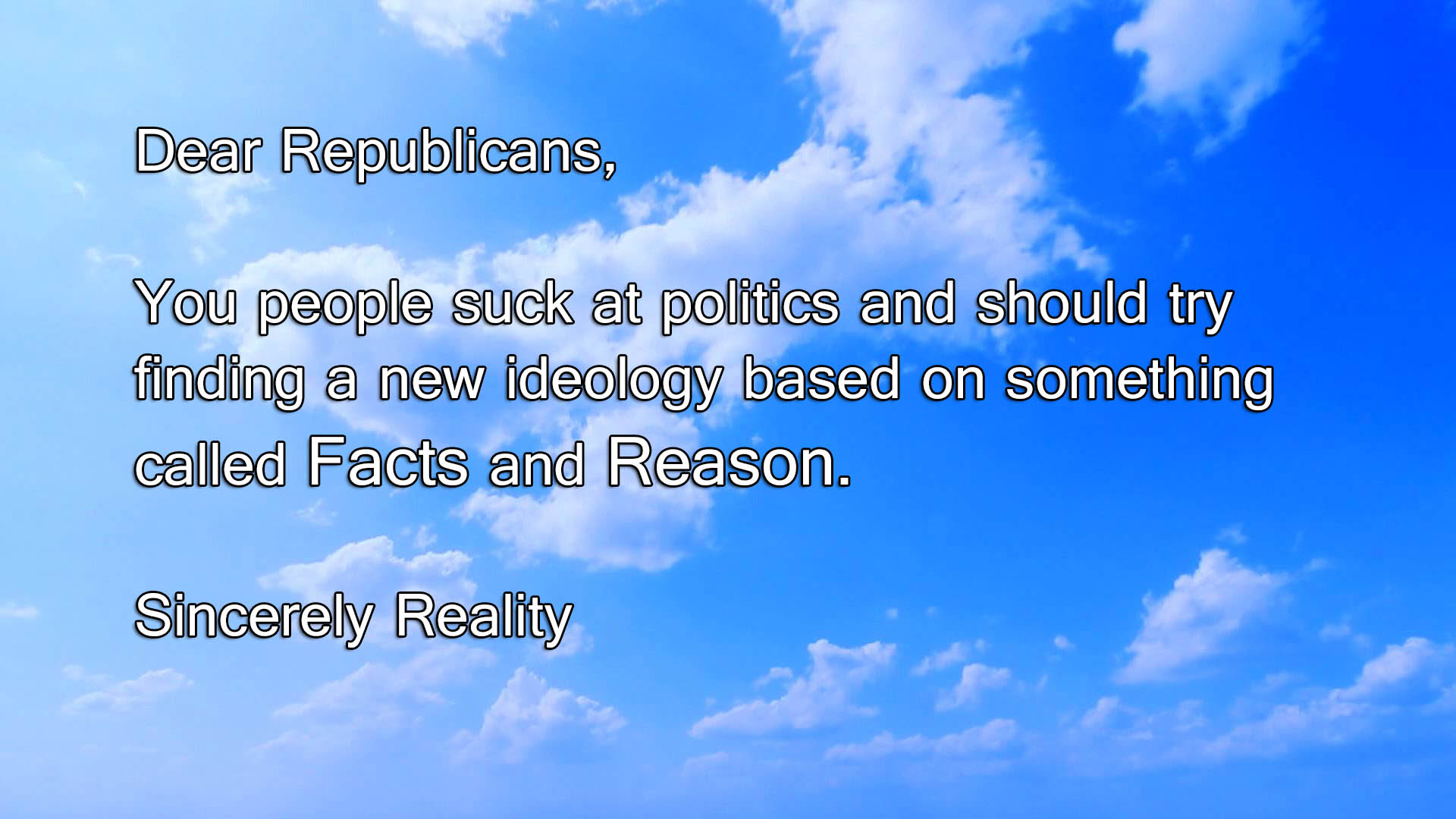