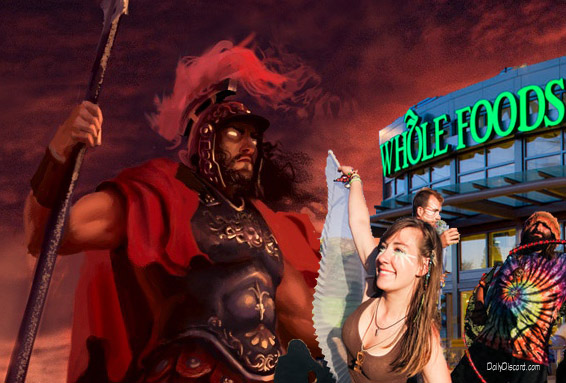 My blogvesary recently asked me, why can’t we just discuss the issues? He then implied that I’m not really good at it. There’s a good reason we can’t just do that. In fact, I’ve been trying to convey what’s happening and why for a very long time. If we have one party severed from our key issues, or credible media sources, or competent journalists, or pertinent facts, why bother? One side is simply not up to the task. Never confuse the warrior class with the thinking class. Some California liberals may have a far left worldview, but at least they’re discussing issues relevant to this planet. The answers to all of our problems lie somewhere between our most conservative Democratic politicians to the wildest left-leaning hair on Bernie Sander’s head. You show me an idea right of Clair McCaskill (D-MO) and I will show you a delusion. Everything right of her is garbage, and you know what we do with garbage today, right? We dump it in the river behind the factory.

To some degree we are all blinded by the right. We are forced to live in their world, which at the moment is a form of collective delusion. The cacophony is so loud Republicans can’t even hear themselves not think. We can’t ignore it, we can’t move beyond it, we’re essentially all trapped here with them. 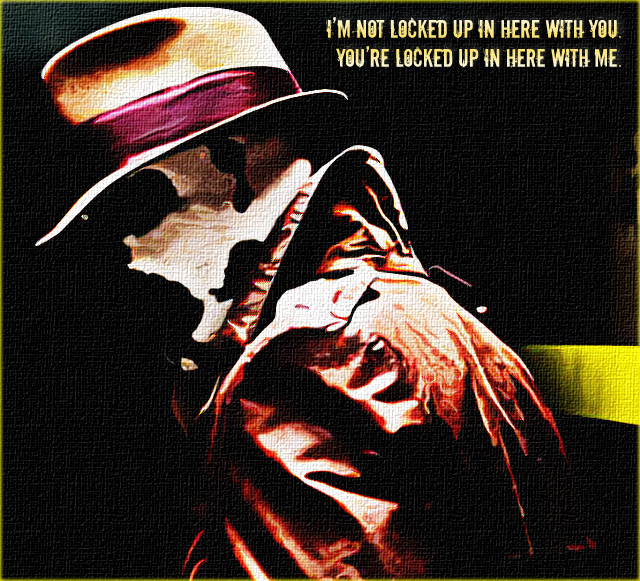 Your leaders are dangerously incompetent and your media promotes “discourse damaging to the public”, until we address that stuff, my friend, I’m ready to throw the big fat man-child out with the bath water. We can not begin to address liberal shortcomings, until the Republican menace is mitigated. It’s an order of operations thing. Take Maslow’s hierarchy of needs, we can’t build a shelter before we’ve secured a water source.

After my last post, What I Learned About The Holiday Political Conversation: The Don’ts And Don’ts, my blogvesary posted this gem in the comments:

“Due to checks and balances, it is very difficult, though not impossible, for one strong man to exert the power of a tyrannical king.”
—Pokey McDooris (Dazed & Confused, possibly naked)

So you want to bring this whole checks and balances thing to the brink again? We’ve already been to the brink, remember? It was after your last Republican president, who lied us into war and then authorized the torture of… yeah, you get the idea. No, you’re right, you’re right …Obama lied, and only 96% of America got to keep their doctor.

Deep State Thoughts: Why is our democracy only truly tested when your side is in charge?

Today, as I write this, Ass-clown and his Press Secretary both thought the president reserves the sole right to fire the special counsel (hint: it’s the AG or someone else from the Justice Dept). This is not about the handful of your unresolved Hillary issues, this is about your side’s unswerving efforts to damage our republic.

My blogvesary then added a handy-dandy list of his grievances that has nothing to do with his political party’s platform. These ranged from the Fed’s untouchable power and lack of a gold standard (a sad reality beyond any party’s ability to address) to things his side either caused or exacerbated (the president’s ability to wage war without congressional approval and the growth of both the military-industrial complex and our deficits). He writes this just a few scant weeks after Trump divided another trillion dollars between the military-industrial complex and the one percent. And he does so, presumably with a straight face.

Whereas I may even agree with your overall ‘nefarious globalists’ premise, what does that have to do with D vs R? And didn’t you get the memo? Deficits don’t exist when Republicans are in charge. They only return to the narrative once the Dems resume office. Hiberinflation? You really need to get your talking points straight; there’s only a handful.

Meanwhile, I predicted Trump would raise deficits faster than Obama and that he would do so via mega tax breaks to the rich while gutting entitlements, here. That’s called insight, and I stand by my original Trump predictions:

The Trump Administration (should this stupidity be allowed to continue): The Trump years will likely go two out of three as well: an unnecessary war, a constitutional crisis, and an economic collapse (and the unnecessary war will be botched, of course, and could escalate to WWIII). Nuts and Boltons?

Are you really saying the GOP is the best equipped party to address the problems our nation faces? Have you seen them lead? Do you understand who Trump just picked as his National Security Adviser? Have you seen the movie Wag the Dog? Remember Plato’s allegory of the cave? You can turn the fuck around and look outside any time now. It’s sunny with a high chance of intermittent catastrophe. 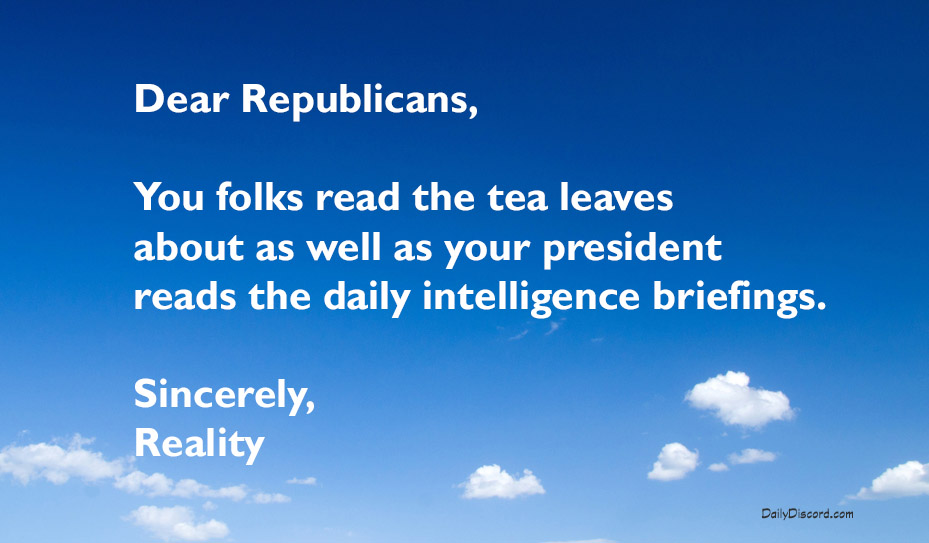 There’s a staggering credibility gap between D and R, one that your side can no longer ignore. Curb your party. Try focusing your efforts there. You have some wonderful insights on cultural issues and globalist conspiracy theories, but you have no valid arguments that the GOP is more competent and effective than the Dems, but that’s only because no such evidence exists.

Here’s a summary of our political grievances:

Pokey’s grievances: 1. The misuse of a private server and the mishandling of some emails by an unemployed woman, 2. Someone had the audacity to try to provide him with health insurance, and: 3. Some poor people are taking advantage of the system.

Zano’s grievances: Total environmental and economic ruin at the hands of a sociopathic man-child.

Here’s how we can return to the conversation, my friend:

When I started this blog it was not my intention to diminish others, or attack their political views so zealously, but I did predict our arrival here. Your brand of conservatism (and my father’s, back in the day) resides somewhere around the more liberal conservatives and the more conservative liberals. The most disturbing shift in my lifetime is rightward, toward populism. Left of CNN does not represent Venezuela, Pokey (think every other industrialized/free nation in the world). Right of Fox News, however, where you folks hang your hat …well, you’ll need matching boots and an armband soon enough.