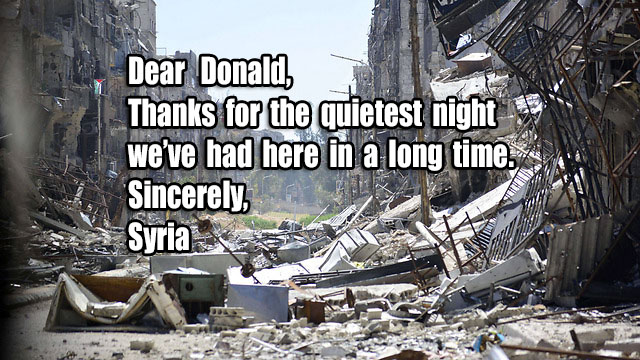 Tweet Tower—The west is a little shocked that the pile of rubble called Syria didn’t really notice last night’s charge of the Coalition of the Vaguely Interested. Who knew the Middle East could be so complicated? Meanwhile, on the resistance front, Rachel Maddow made some news of her own over on MSNBC. While the bombing was still underway, she perseverated on the whole Wag the Dog theory, which suggests our president is bombing someone (anyone) as a distraction from his own domestic woes. In the president’s defense, he is fighting some serious scandals on at least two fronts.

Kudos to our Secretary of Defense and our friends across the pond for trying to keep things Trump light. Two words: Tony Blair. Donald Trump, the same guy who ran on avoiding unnecessary wars, called for broader attacks on Syria on the lead-up to this engagement. He probably wanted more sweeping attacks after talking to Kellyanne Conway about the expected ‘bombs to news cycle’ ratio.

Isn’t anyone else concerned about those trying to serve our country under these circumstances …especially now that John Bolton has assumed the role of our National Insecurity Adviser? Anyone, Mueller, Mueller …Mueller?

Hint of the Day: you might want to start complaining about those bone spurs, peeps.

I searched Wag the Dog on the Discord, and here’s me last November:

Trump: “I didn’t know what this word collusion even meant, but then when I found out, I was like, sure, let’s collude with Russia. Why not? I’m down …no really I’m like hanging at a 35% approval rating, so I don’t think a little collusion could hurt at this point. I’m thinking we blow some shit up so I can get my polls back up. That Trudeau has been pissing me off lately. You in, Vlad? Hey, have you seen the movie Wag the Dog?”

Here’s another one on deck:

“When the next horrible foreign policy decision occurs, or Trump gets desperate enough to stunt his way into a martial law situation, remember, this was avoidable and the blame clearly lies at the feet of the most dangerous president in my lifetime and the most incompetent political party on Earth.”

I also have a great Bolton:Most Interesting Man in the World bit, but I just have to wait for enough innocent people to die before posting. Yes, I’m feeling a little conflicted. Oh, what tangled websites we weave. Actually, I’m not conflicted, I didn’t vote for this asshole or the last Republican war criminal. This is simply how I cope with other people’s bad decisions. This has always been a race between the end of the Republican party and the world. Each year just gets a little more nailbitery. That’s a word.