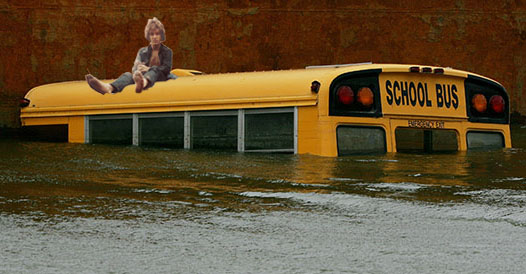 Houston, TX—At the onset of Hurricane Harvey, Katrina-survivor and crazy person Jake “Jakey” Thompson drove his refurbished school bus all the way from his home in New Orleans’ Lower Ninth Ward to a heavily flooded area of downtown Houston. Upon arriving in the metro area, Thompson careened wildly through some flooded streets before attempting what witnesses are calling a ‘wet bus doughnut.’ Eventually the bus stalled in several feet of water, in a handicap zone. Emergency personnel were able to rescue Mr. Thompson, but upon hearing of his adventure, in painstaking detail, they resolved to drop him back off on the roof of his bus with some bottled water and a half-eaten granola bar.In the wake of Hurricane Katrina, Mr. Thompson purchased one of the infamous stranded buses for a song. Literally², as it was both in the wake of Hurricane Katrina and he exchanged the rights to his song <em>Dankleberry Blues</em> to the Armpit Salesmen for the water-damaged vehicle. The Armpit Salesmen had allegedly purchased the bus only hours before from a band of radicalized mariachi players.

Mr. Thompson explained his decision to make the ill-fated journey. “Eventually you start to miss all the mayhem, the wind, the muddy water, the screams. I think I miss the screams the most. Fine, I really just wanted to call 911 and say, ‘Houston, we have a problem.’ I always wanted to say that shit, you know, to the backdrop of some type of real context. I also wanted to slam a Harvey Wallbanger while Harvey was slamming on some walls.”

Otto Mann, the bus driver of Simpsons fame, added, “I don’t know what that dude was thinking. He needed to Youtube that ‘wet bus doughnut’ shit.”