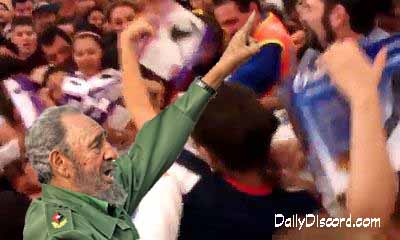 Miami, Fl—News is breaking that Cuban Dictator Fidel Castro did not die peacefully in his Havana Home as initial reports suggested. The Cuban leader was apparently trampled to death after a fight for the last pair of Bluetooth earbuds at a Walmart Supercenter in east Miami. Fidel Castro’s brother, Raul, made a statement to the press, explaining how his brother “hated his shitty earbuds” and wanted something he could “really jam to.” Raul warns his brother’s death has once again escalated tensions between the U.S. and Cuba. “We are calling this the Cuban Headphone Crisis, even though it didn’t happen in Cuba,” said Raul. “We are working on a better name.”

Castro apparently made the daring trek to Miami last week on a small dingy and then hid in a Starbucks until the sale went into effect on Black Friday. “He pretended to be a Fidel Castro impersonator,” said one Starbuck’s barista. “He was a dead ringer for himself. Oh, I guess that’s in bad taste now.”

Donald Trump commented on the new developments, “Forget what I said earlier today about Castro being an asshole. I forgive him for all of his sins. He died an honorary American, scrambling for bullshit as we piss away the last of the planet’s resources. I love that shit. We will bury him Arlington, with full honors. And I may bury his brother there as well, prematurely, if that son of a bitch messes with me.”