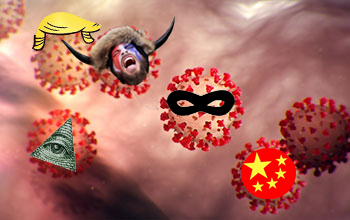 My blogvesary recently inquired into my mission here at The Discord. What are you doing, Zano? Art as entertainment? I actually agree with him on this one, which is why I’ve shifted the bulk of my energies from writing to inventing the first DMT snuff pouch©. This doesn’t change the fact I spent a couple of decades trying to point out this country’s mounting idiocy and our imminent descent on the world stage. Bad management is ultimately bad for business. Who knew? Reaching back toward an ‘industrialized west status’ won’t be easy for this new president, which might explain why my worldview lists toward the septic side of dystopic. But I would like to remind my blogvesary of another of my key predictions; namely, the arrival of you and your ilk, a group impervious to reality, swayed by the yellowist shades of journalism, and forever ready to wage war on reason. So what’s left to discuss after this pack of Unreachables has established itself on US soil? You arrived on schedule, safely. I hope you enjoyed your flight …into madness. I suppose if one glances over to the GOP wreckage, liberal ‘art as entertainment’ sounds nice, at least comparatively. Although, I understand you’re also not good at comparisons either. My friend is currently hyper-focusing on three main conspiracy theories, but not for the reasons he thinks…

My friend believes I often misstate his positions, so I will tread with caution. The motives behind his views are what fascinates me. He is still championing a few controversial items: 1. Trump’s defense of the use of Hydrochlorquine to treat Covid, 2. The general election was stolen by the ‘deep state,’ and 3. The Coronavirus was an intentionally released bio-weapon. Merits aside for a moment, the main function of these topics is to shift blame from Trump to Big Pharma, from Trump to Big Brother, and from Trump to Big Beijing. Did you ever wonder, Poke, how these tidbits keep popping back to the top of your newsfeed? Whimplicit bias?

Here’s what I’m trying to figure out: how does a reasonably intelligent guy end up on the wrong side of every issue of our time—not to mention how an entire political party follows suit. Your statements and conspiracy theories remind me of that crazy Rumsfeld quote (paraphrased):

(1) Known knowns: several ‘prominent’ doctors support off-label usage. Five studies were conducted on hydroxychloroquine: only one study supports further clinical trials and the rest were either neutral or negative.

(2) Known unknowns: as far as I can tell, no clinical trials are occurring to date, or is there?

[R types collect the known known factoids, mixes in their biases, and morphs these into a projected conclusion.]

(3) Unknown unknowns: Trump was trying to get life-saving medication to the public during a pandemic, but the media and Big Pharma have combined forces to squelch this information, killing people in the process, all just to embarrass the president and foil his reelection chances.

Meanwhile, in the world I’m forced to reside, republicans paved the way for an even bigger Big Pharma through protectionist patent laws (Reagan), and Citizens United (R-supremes). Big Pharma has been a great evil for decades. If you recall, I commended Trump for only two positions on the campaign trail: “Big Pharma bad, and Iraq War dumb” …although Trump said it somewhat more eloquently than me at the time. The fact Big Pharma is following the money isn’t news. And I will remind you, again, how non-physicians pushing off-label usage prior to clinical trials is still a crime. If you think Trump should be praised for this, well, I think you spelled arrested wrong.

This one ranges from Spygate to the stolen election and all the way to a group of elite liberal satan-worshipping pedophiles, aka too broad to dismantle in a similar manner. But if there is a Deep State, republicans championed an even Bigger Brother through an intelligence community blank-check otherwise known as the Patriot Act (Dubya 2001). The “Technocratic Age” and the “Global City” rhetoric that my friend so fears had their origins at the Trilateral Commission (Nixon 1972). And I’m sure if this Secret City exists it contains a Cheney Plaza and Kissinger Park. I mean, who are you kidding, Poke?

As for the related Stop the Steal nonsense, my friend recently tore down a post in which he mocked the Arizona recount and those “votes that disappeared in Maricopa County.” As it turns out, only his post actually disappeared, the votes couldn’t be found because the auditors involved were idiots. No retraction, of course, my friend just yanked it down after yet another hunk of red meat spoiled in the sun. His followers will not be privy to this new information or any relevant information for that matter. Standard Operating Pokecedures? People went to jail for the events of 1/6, so why is my friend not keeping them up to date on the actual play-by-play? Doesn’t he realize these are the next batch of potential Dimsurrectionists?

(1) Known knowns: there’s a secret lab in Wuhan, China, working on viruses—all very hush hush, much like the rest of China. The location of the first outbreak is clearly suspect.

(2) Known unknowns: there are two scenarios currently supported by the scientific community, Covid occurred in nature, or it accidentally escaped from that Wuhan lab, natural or modified. But was the virus being studied or created? Was it being crafted into a bio-weapon? Was it released intentionally? Is it the same virus responsible for the hit Netflix zombie series Kingdom?

(3) Unknown unknowns: the media and our new president knew all along it’s a bio-weapon that was released intentionally by the Chinese government all for the purpose of diminishing the only man who could save America, Donald J. Trump. The media and the deep state intentionally lied to the American people about the true origins to damage the former president. [This narrative is implied, if not outwardly stated.]

From the beginning, I felt the likeliest scenario was the latter of the two possibilities; it escaped from the lab. Otherwise, the first outbreak would have likely occurred in NY or DC, not the Wuhan Province itself. Deep thoughts, by Mick Zano. I think even Inspector Clouseau could have figured this one out, Poke. This doesn’t rule out an intentional release of the virus, of course. Who thinks China’s the good guy? Where is the secret liberal cabal of China enablers? Hey, just be thankful I avoided a Curse of the Pink Pandemic joke.

In the world I am forced to reside, China became our number one, long-term foreign-policy threat the day the Berlin Wall fell. This is not a problem that popped up on the afternoon of January 20th. However, as a direct result of Trump’s mismanagement of the pandemic, China is now 5-years closer to overtaking the US economy. More importantly, they are now incentivized for a second pandemic, whether the first round was intentional or not. Those are the key pandemic takeaways, yet you are using this to somehow cast the Trump Administration in a better light, which is a terrible idea as cockroaches tend to scatter. Hopefully, President Biden does investigate the virus’s origins because, unlike his predecessor, he might get to the bottom of something other than his Adderal stash.

Again, your arguments are interesting, but please understand why you’re being encouraged to hyper-focus on them. It’s all an elaborate effort to craft an alternate reality wherein the former president, along with the rest of The Donald Youth, can walk and chew gum. Frum came to a similar conclusion over at The Atlantic. There’s also this strange republican ownership of the known knowns. We are the only ones who understand that Wuhan has a bio-weapons lab. We are the only people who understand that Big Pharma is a very bad organization. Hmmm. You are not Woodward or Bernstein. These are known knowns. Here are some other examples of known knowns: Boise is the capitol of Idaho, the Boer War started in 1899, Trump is a known known criminal. But, like a compass that forever points due south, the conservative viewpoint can still be a very useful tool when one considers—

[‘Useful tool’ joke removed by the editor and mailed to the Nixon Library.]

Historically, each rightwing conspiracy theory goes through a number of twists and turns as the truth catches up with each component until they are all eventually dispelled, one by one (typically in a court of law). What my friend never seems to realize is that none of these known knowns are even news and none of his ilk’s unknown unknowns make any sense. The original premise of any given RedState-style conspiracy theory never survives long-term scrutiny, at least historically, yet this never seems to deter its evolution or its proponents.

I don’t really understand what additional information you and your ilk have offered in these areas. As for Wuhan, the scientific community has recently evolved toward my position (accidental release), and new information could well validate your theory (intentional release). What are you saying, we start a war with China and then investigate? If a few doctors think heroin is great for halitosis, we go for it? And the rest of your conspiracy theories are just that. What is news is why you are focusing on these issues in the first place, which is all part of this ongoing scheme to defend the indefensible.

Poke wanted me to add a couple of things, but this one wins the day: “This Discord Article was much more honest in its witty propagation of delusions.”

The hydroxychloroquine “studies” did not study its effectiveness when taken at the early stages of symptoms along with zinc and azithromycin. The combination of these three substances has been found to be helpful at treating Covid at the earliest stages. Big Pharma (to my knowledge) has not done any studies on these 3 substances together at the early stages. In January the American Journal of Science published an article recommending this.

AZ Recount: After reading an article about the Maricopa County recount, I hastily concluded that the county had ceded control over their election to Dominion. Larry posted some challenges that showed me that I really did not understand the pertinent facts of this issue. I thanked Larry for helping to reveal my ignorance on the matter, and I took down the post.

Wuhan’s Bioweapons: In May 2020, the claim that Covid leaked from a lab was deemed “a debunked conspiracy theory.” This week Politifact amended its “Pants in Fire” verdict. Fact—for years it has been public knowledge that the Chinese govt has been seeking bio-weapons for purposes of war. We now know that people working in Wuhan showed Covid symptoms in Oct. 2019. The Chinese govt refused to allow inspectors into Wuhan and punished scientists who suggested that Covid may have come from the lab. There is records showing that the “bat woman” actually worked in “gain of function” research in the Wuhan lab a few years back. I can’t possibly know if Covid came from a lab, but I do know that China has been, and is, seeking bioweapons for purposes of war …and any media outlet or fact-checkers whoever deemed that the theory claiming Covid came from a lab as “a debunked conspiracy theory” is a fucking liar.

Under Oath—Crowdstrike president said “no forensic evidence of exfiltration (hacking)” of DNC. Court deposition shows that WikiLeaks paid money to Seth Rich. FBI, who once said they had no info of Rich, now acknowledges they have thousands of pages of documents on Rich.