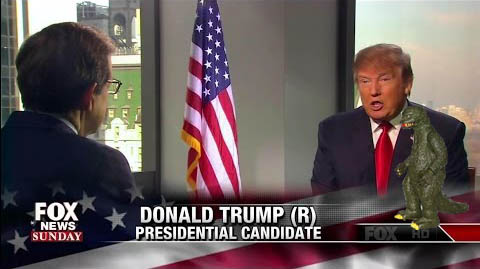 New York, NY—Donald J. Trump is once again defending his controversial comments today. During an interview with Fox News’ Chris Wallace, Mr. Trump attempted to defend his earlier comments regarding the U.S.’s ongoing defense of our NATO allies. “Take Japan,” said Trump. “I used to be in the protection racquet and you pay for that. Everyone pays for that. Back in school you were protected in exchange for your lunch money, but for a whole country the price goes up. I admit we should help in the case of a Godzilla thing. That’s more of a humanitarian crisis. We do have to ask ourselves, though, why does Godzilla only attack Tokyo? It’s their capital. That overgrown GEICO spokesperson is trying to tell us something. What did the Japanese do to piss him off? Godzilla is not going to take any crap. There’s no crap with Godzilla, which is why there’s a place for him in my cabinet. It’s a big cabinet, gold-plated too. Maybe Japan needs to be a little more like Godzilla and a little less like those other monsters always getting their asses kicked. Japan is the loser monster and rules are rules. And the rules are the loser monster has to give me their lunch money.”

Mr. Wallace questioned Trump further about whether or not having Godzilla fulfill governmental duties was realistic. He then reminded Mr. Trump that Godzilla attacked New York in 1996 and San Francisco in 2014.

Trump became enraged, “I know that! You don’t think I know that?! I would have squished Mathew Broderick like a bug, so maybe I’m tougher than the so-called King of the Monsters. If Godzilla doesn’t want a position in my cabinet I’ll get that flying fucking turtle, Michelangelo. Think about it. If that bastard is still a threat, we’ll already have the wall. It will just have to be expanded along the coasts …you know, like in that movie Pacific Rimjob. Look, during a Trump Administration Godzilla is going to have to get in line, or I’ll stick a nuke so far up his scaly ass he’ll be shooting out fire every time he burps or farts!”

Presumptive Democratic nominee Hillary Clinton responded, “Mr. Trump, Godzilla already breathes fire every time he burps and farts. Your stunning lack of Godzilla’s behavior, as well as the Japanese monster-genre in general, makes you unfit to be Command-in-Chief.” Then in a moment of confusion, added, “Mr. Gorbachev, tear down this wall,” before she recited the same paragraph Ivanka Trump plagiarized from Michelle Obama.

Mrs. Clinton is denying claims she has her own interests in recruiting Godzilla. Rumors are abound the former Secretary of State has already commissioned over fifty textile factors to coordinate on the creation of a seven-story pant-suit. Julian Assange is warning how more information on this matter is forthcoming. “Including the color,” added Assange.