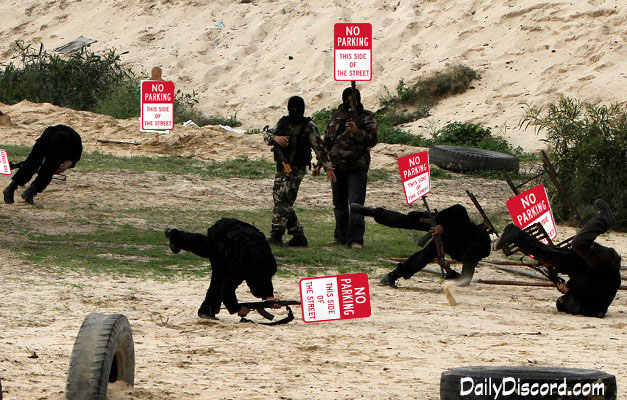 Syria—The leader of ISIS, who wished to remain locationless, is claiming responsibility for what many in urban areas are calling “a major pain in the ass.” Alternate Street Parking remains a huge inconvenience for urban drivers, who risk fines or towing if they mistakenly park their car on the wrong side of the street overnight. Whereas Jihadists groups are claiming responsibility for this urban-fine-accruing-tactic (UFAT), many radicals groups are falling short of supporting downtown two-hour parking mandates and other meter-maid activities. “We may be jihadists, but we’re not complete assholes,” said local radical, Jihadi Jackson.

ISIS claims Alternate Street Parking is mentioned in the Koran. The original phrase is believed to be an eye for a parking violation. “Innovative thinking like this is what sets us apart from other radical separatists,” said Beheadsi. “We think outside the box …and then we blow up the box. That’s our new motto, by the way. Granted, it doesn’t fit on a hat yet, but we have our best people on it.”

When asked about the strategy behind what many consider a nuisance for urban drivers, Jihadi Jackson responded: “It’s not just the inconvenience of the thing, although that was part of our initial motivation; what happens when it’s not worth driving into a big town or city? More people commute on trains or buses and, for us, commuter targets are where all the real magic happens. We would like to get all Americans into one gigantic bus of the future, although the blueprints remain daunting. The Koran refers to this as a GreyHoundiphate.”

Others claim this a clear sign of desperation. “Let me get this straight; they can’t get a hold of a dirty bomb, so they decide instead to just screw with downtown parking? What next, suicide meter maids? A roaming jihadist fire hydrant? Don’t they realize monies collected from downtown fines goes directly to Jesus?”

How Is ISIS Radicalizing Our Children?