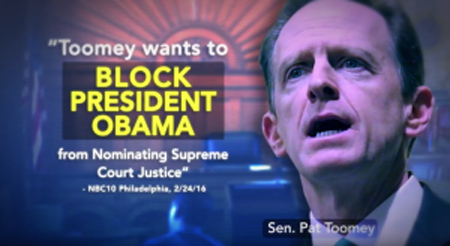 Can I call you Pat? Hey Pat, please stop that ad campaign during which you attempt to justify and seek approval for your abandonment of the U. S. Constitution. I’m tired of you telling me how it’s my choice as to who fills in the vacant Supreme Court seat. Personally, I would pick Brian Griffin from Family Guy. That’s why it’s not my, nor the American peoples’ choice. It is the choice of the guy the majority of the country duly elected to the Oval Office (twice). It is the sole decision of the Presidents Of The United States of America. I’m talking about Obama, not that band from the 90s. Millions of ImPeaches?

Pat, let me remind you of what you promised when you took office:

“I do solemnly swear (or affirm) that I will support and defend the Constitution of the United States against all enemies, foreign and domestic; that I will bear true faith and allegiance to the same; that I take this obligation freely, without any mental reservation or purpose of evasion; and that I will well and faithfully discharge the duties of the office on which I am about to enter: So help me God.”

— US Senate Oath of Office

Now, Pat, the Appointments Clause of the U. S. Constitution states that, when a Supreme Court Justice bites it, it is the President’s duty to nominate a replacement. It is Congress’ duty to provide “advice and consent” regarding this nominee. This is advice and consent after the fact, requiring a simple majority vote to pass. Unless the guy is fundamentally incapable of doing the job, you really don’t have a good reason to say “no.” Congress itself cannot exercise appointment power; this is reserved for the executive branch. Hint of the day: you are not part of the executive branch, Pat. Do I have to link to an old School House Rock video? Okay, Conjunction Junction What’s Your Malfunction? Now watch this, Pat. There’s going to be a litmus test.

The framers of the Constitution were particularly concerned that Congress might try to pull shit like this, namely, usurping the power of appointment in order to fill the position with your supporters. This is unconstitutional, therefore illegal, making you an enemy of the Constitution. George Washington himself (remember him? He was a Constitutional framer) wanted it to be absolutely clear that it was “advice and consent,” and that the final decision was the President’s and the President’s alone.

So do your fucking job, Pat, and approve Obama’s reasonable nominee in accordance with the U. S. Constitution and the oath you swore, you neo-fascist subversive mother fucker.

P. S. Get those fucking ads off of my TV. Thanks Pat.

P. P. S. Oh, and saying that you denounce rioting is like saying you denounce molesting children. It’s not something you really have to come out and say. It’s implied, like the Ghetto Shaman’s extensive criminal background. So saying that you’re the only one to say it …aint sayin’ much.

P. P. P. S. Could you tell your fellow oath-takin’, tea bag, douche bag mother fuckers running the House and Senate that it is also unconstitutional to refuse to bring nominees up for an approval vote? This is borderline treason and grounds for impeachment and subsequent execution (first offense).