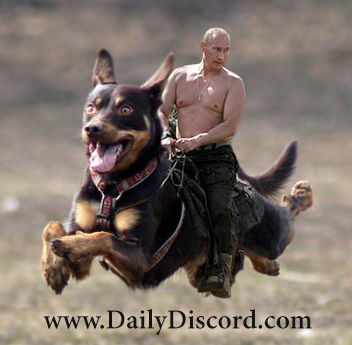 Unable to procure a proper bear image, Discord Photoshoppers instead went with this dogs-of-war motif. Similarly, the strange crescent-moon symbol over the ğ in Davutoğlu’s name was flown in special via Free Font Island. Putin plans to retaliate both for Turkey’s ongoing taunts and The Discord’s lack of Photoshop prowess. As for the specially flown in crescent-moon symbol, Putin suggested Davutoğlu insert it somewhere.

Weird Al Yankovic predicted a nuclear holocaust would occur on Christmas and penned the song Christmas At Ground Zero. Now it looks like Thanksgiving Day will bring us to DEFCORN 2. Since moving the Russian S-400 missile battery into Syria, many are calling this the Gravy Missile Crisis. Ok…just us.

Putin did attempt to quell the world’s fears of a nuclear Armageddon. “The Arab Spring will not end with a nuclear winter,” said Putin. “But I don’t want my American friends to worry about salmonella this Thanksgiving. The Turkey will be thoroughly cooked, I assure you. Hah, hah, get it? Instead of cleaning and stuffing your bird with bread, Russia will be stuffing the country Turkey with about a hundred Fukushimas. Wreak havoc and let fry the yams of war! Oh, and pass the stuffed mushroom clouds. Get it? The streets will be filled with cranberry sauce! I have a million of them…nukes, I mean.”

Putin also reassured the American people he would not end the world until “after all the football games.”