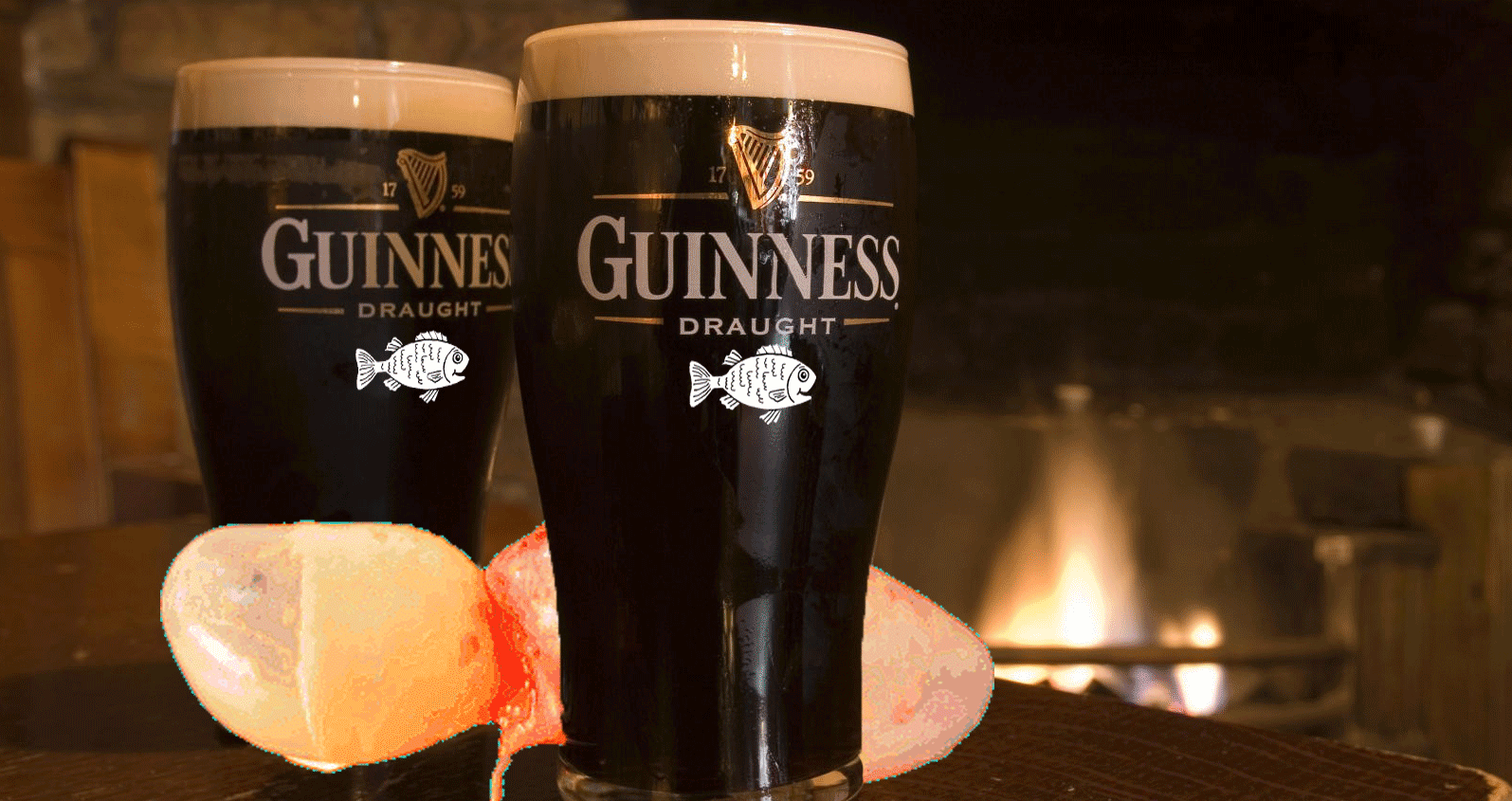 Las Vegas,  NV—It’s been awhile since I’ve paid homage to the Guinness Gods, but I wish I was returning to this topic under better circumstances. I bring terrible news. It’s not about the Mets; it’s much worse. Guinness is taking the trace amounts of fish bladder from their famous malt-roasted magic. I know, I know, but it’s going to be okay, because I’m suing Guinness and every internet troll who attacked the use of this natural product. This important ingredient will likely be replaced with creosote or some other industrial varnish. How can they change a centuries old recipe in any way shape or form, even if said form is bladder-shaped?! Don’t touch a hair on this sacred brew’s head…well, you can take out the hair, but that’s all! Hit the read more button to read my inflammatory letter sent snail-mail to Guinness Inc.

Have you heard about this fish bladder controversy, here? Whenever I sip the mother’s milk I am instantly transported to the land of green pastures and even greener leprechauns. Wrapped in all those complex flavors is the hint of the rugged northern shoreline. Maybe the fish bladder captures the essence of this briny and irreplaceable aspect of the Emerald Isle.

The ingredient in question, the fish bladder, is used to clarify the beer and filter out some of the toxins post the brewing process. They try to get all of it out, but trace amounts often remain in the final product. I imagine such toxins will either just float around in there now, or they’ll try to remove it with a series of giant pool skimmers or some dipshit. Thank you, alarmist assholes. This natural ingredient used to filter out yeast cells and other toxins will likely be replaced with something like Butylated Hydroxytoluene. Don’t Butylate my brew, bitches! Rumor has it Vegans are behind some of the pressure to make this ill-conceived change. Don’t get me wrong, I love vegans. They taste like pork. 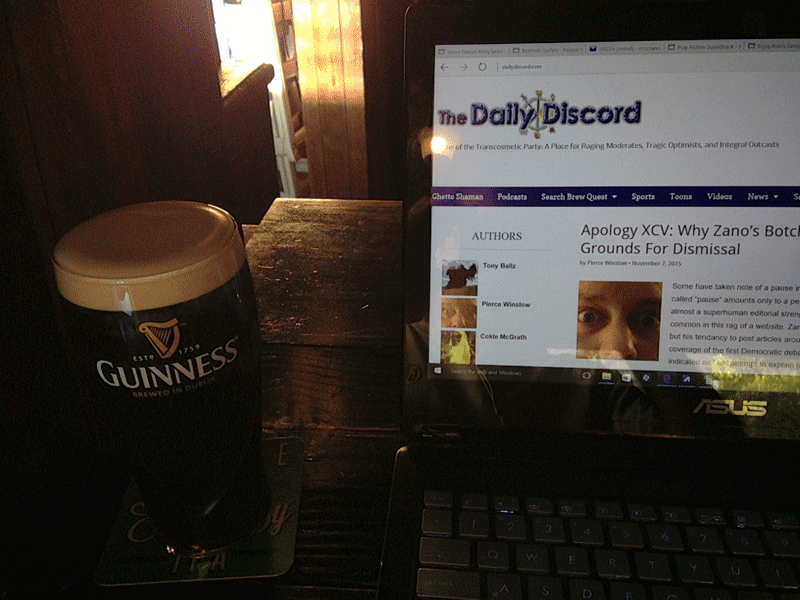 I felt more research was in order but, Mr. Winslow’s email already made things abundantly clear:

“You’re going to Ireland for what?! WTF, Zano!? I’m not paying for your flight, or your food, or your lodging or whatever other shit you’re up to, you conartist of a scheister!”

With a trip to Ireland not in The Discord budget I decided instead to head to something nearly as Eirey…Vegas. Yeah, Winslow didn’t buy it either. Once in Sin City, I took this picture (right) of The Discord and me pint at the Auld Dubliner.

Here’s the letter I sent to Guinness Inc.:

Before writing this letter I drank some of your timeless and ageless product. Correction, a product I once thought of as timeless and ageless. Isn’t timeless and ageless the same thing? That’s not why I’m writing you; I feel betrayed. Why are you caving to popular whims and pressures? That’s my job. What have you substituted for the fish bladder, anyway? What could possibly replace the aquatic filtration goodness of on all-natural fishy-pissy bladder? Obviously you’re going to replace this organic urethric clarifier with something decidedly more synthetic. Why not take out the dumb factor and leave the ick factor alone?! Do you know how much these same alarmists are probably paying for capsules of fish bladder at Whole Foods, GNC and the like? You should charge extra and call it a day. Organic fish bladder is associated with faster wound healing and reducing symptoms of Parkinson’s. Indeed, I made up the joke and then Googled this stuff and, lo and behold, it is medicinal, here. Oh, you can’t click on that, Mr. Guinness, because this is a letter. But you probably already know this as well, don’t you?

From what I could ascertain from Drinkipedia you are using Isanglass, a substance obtained from fish swim bladder, to clarify your product. My limited understanding of Isangarssd is that it remained one of three fortresses of Gondor, but it was the first to the fall to the will of Sauron under the rule Sarumann! I don’t even remember the leprechauns showing up to defend Isangarssd in the films or the books. Perhaps that battle occurred in the fourth and little know Tolkien work, Again With The F-ing Hobbits. Don’t you see what this means! I don’t, so call me, Mr. Guinness. We need to talk about this over a pint…of something else. Oh, and if I can get an exclusive interview, Mr. Winslow will pay my expenses to your St. James Gate for further investigation. Dried swim bladder sold separately. And, if we do go somewhere else, I can probably write the whole thing off as “business” expense.

For my Best Guinness Pour In Tucson feature click here and for Vegas click here. You’ll be glad you did. Even if you never heard of the beer or the places in question.