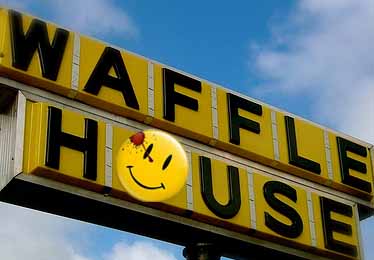 This is the first non-fiction headline to appear on The Discord. It’s not ours. Discord News Alert: we can not compete with this. It’s important to understand one’s limitations as this is simply beyond our current comedic abilities. To add insult to spoofery, on the same day our lead anchor, Matt Mathewson, informed me of a second headline: Red Power Ranger Murders Roommate With Conan Sword. Seeing headlines like these should inspire me, but they only compel me to attack random diners in some Waffle House with a Conan sword, preferably naked.

Yes, I’m seeing red right now and Flagstaff doesn’t even have a Waffle House, which is like pouring assault onto the wound. I resolved to cover these two important stories today and see what we can glean about both our culture and ourselves. If you can’t beat reality, join it.

OMG, the answer is nothing! That was like watching Fox News during a root canal. As for The Waffle House incident, it occurred in Georgia, which is where the Zombie apocalypse originated in The Walking Dead. The rampaging naked woman did scratch several patrons during the incident, so I firmly believe these individuals should remain in an observation unit to rule out a T-virus-like infection. If for no other reason, because they are patrons of a Waffle House.

As for the alleged roommate/Conan-sword murderer. It was only the actor who played a Power Ranger. He wasn’t dressed as a Power Ranger at the time of the attack, which is somewhat disappointing. The fight between roommates was over a girl (oh shock), who witnesses describe as the female Wonder Twin.

Fine, I made that part up, aka, I’m sticking with spoof news. Reality is frightening. And on that note, Is Elvis Responsible For The Disappearance Of The Mayans?