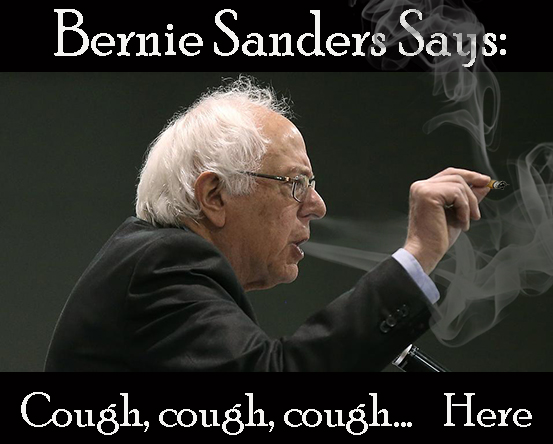 Burlington, VT—Sen. Bernie Sanders (I-Vt.) told The Discord today he supports both medical marijuana and the decriminalization of cannabis. Senator Sanders is also open to the recreational use of marijuana for the strict purpose of increasing the creativity of a certain group of spoof news bloggers, “who really seem to suck without it.”

Sanders told reporters, “I have read The Discord’s material with and without marijuana and there’s only one way to enjoy their quirky brand of political humor. I have carefully studied the research on cannabinoid creativity enhancers (CCEs) and (cough) without legalization these guys are going tits up. To be blunt about blunts, they need to smoke more pot and so do their readers.”

When asked about full legalization Sanders said, “We are watching Washington and Colorado very closely as there are some spoof news sites out that way that are really starting to blossom in this new environment. Conversely, in some square states other sites are really going to pot. For example try smoking some daily currant or an onion for that matter. I don’t know what they’re thinking. I also belieave the work of Rogan and Franco is greatly enhanced with marijuana. Some movies are, frankly, unwatchable without this important medication. Two words Zoo Lander. Try that shit straight. Having pot during certain movies is both a public service and a necessity.”

Reading between the lines, we believe the Senator wants to do some lines. When asked if marijuana also enhances politics, Sanders said, “Just look at who doesn’t smoke! What a shit-show. When I was Governor of Burlington I was stoned out of mind the entire time. There is a causal relationship between pot and politics but more research (cough) needs to be done. On that note, I will pass Proposition 420. I can not guarantee the time zone, but it’s got to be 420 somewhere.”