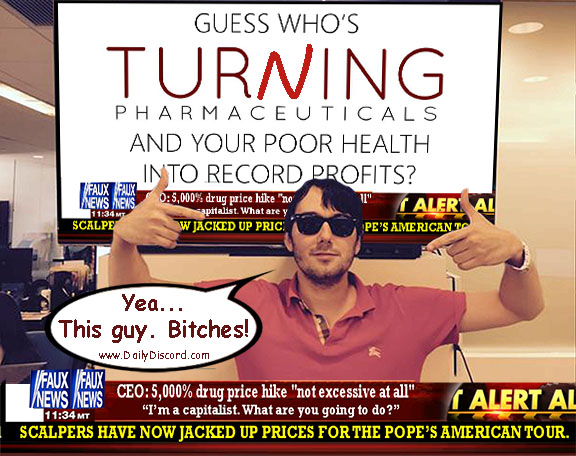 It’s not this scandal that’s pissing me off, it’s the coverage of this scandal. Sorry, there’s no such thing as egregious price-gouging in the pharmaceutical industry. Have you Googled the pharmaceutical industry? …you know, since The Google was invented? Have you purchased a newer non-generic medication lately? Ask your doctor if a reverse mortgage for aspirin is right for you. What’s a 5,000% markup between friends, eh? Do the math, people. Seriously, I can’t. I have a liberal arts degree. When people say the words predatory-capitalism, I believe one of those words is superfluous.

Can you believe this Martin Skrelli guy? Oh, you haven’t heard of him? Well, he’s the hedge fund manager/CEO of Turing Pharmaceuticals who made a killing off of a life-saving medication. He marked up an AIDS related drug, Daraprim, so high that even Denver mountain-climbing hipsters started saying, “Damn, you high!” Personally I was always more of a Mulder fan, but Skrelli is one of those one percenters the Foxeteers keep drooling over. My question is how do you stand out among this crowd? Big Pharma is the uncontested winner of the price-gouging arts. Hell, they even beat lawyers.

The only thing I don’t understand about this scandal is why it has taken us so long to identify this as a problem. Years ago, I described a scene shortly after the collapse of 2009 wherein a Bentley pulled up to my workplace, complete with a chauffeur in stereotypical garb. He was polishing the stereotypical fender of this stereotypical classic in true stereotypical fashion. It was surreal. The car belonged to drug reps selling their wares to our doctors and psychiatrists, post the Bush collapse. When the rest of us were wondering if we could stay open or if the the mentally ill might salvage some scant services, they were bringing our medical providers tons of free food…in a Bentley. Driving Mrs. Crazy?

These drug reps actually started making people sign in at my clinic, because Bone and I kept sneaking in for the food and then leaving before their spiel. Eventually they stopped caring if we left, because if we stayed it went worse for them. Bone always tried to ask unrelated questions about crawdads and I always kept trying to buy stock in Placebo. They don’t like when you keep pointing out how strong the placebo effect is compared to whatever the hell they were peddling.

The coverage of this pharmaceutical “scandal” is what spurred me write this bit. It’s not a scandal if it’s business as usual. Turing is not a rogue example and there’s no such thing as ‘egregious price-gouging’ in this industry. Frankly, they all suck. Mr. Skrelli is just a couple of thousand percent above the fray. It’s like saying, the head of ISIS is out of control so let’s stick with the more moderate head of Al-Qaeda. Sharia flaw? The whole industry has been screwing us for a very very long time.

A certain amount of markup for this industry is understandable, for research and what not…but it’s the what not that bothers me. Speaking of which, it also came to light this week just how much money Johnson & Johnson profited off of human guinea pigs, here. Hey, at least they’re aptly named. So how about referring to them as Double Phallace Pharmaceuticals? Or should we go for the threefer, aka Johnson, O’Toole & Wang? Triple Palace Phallace Pharmaceuticals? Sorry, Dr. Leigh is telling me it’s penis envy. She just makes shit up.

Look, in this environment, I agree with Turing’s approach. Most one-percenters are raping the planet of resources and wealth without bothering to provide life-saving medications. Most people who need medications are aging and our older people happen to be our richest, aka prime for the picking. It reminds me of the noble words of Senator Al Franken. Okay, I couldn’t find the book, but this is the gist:

“We spend 400 billion dollars a year on Medicare for old people, and NASA spends 200 million a year on astronaut safety. Do you see where I’m going with this? Send old people to space!”

Sorry Senator, I tried to find your book but I don’t even have a basement anymore. After all these years, his premise rings true. Rush Limbaugh is STILL a big fat idiot. I wonder why Skrelli isn’t running for office and battling Trump for the top of the heap. He’s an even bigger asshole, he’s a one percenter and he’s Charlie Sheen winning. Therefore he has all the street cred needed to be the next sociopathic, homophobic, bigoted, fact-impaired republican for president. I still like my old ticket. Maybe next election cycle: 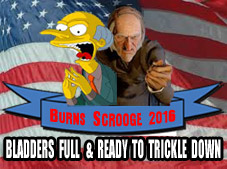