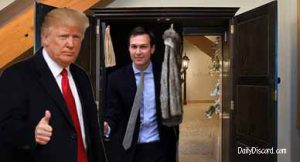 Tweet Tower—President Trump is asking Congress for an additional 200 million “just to keep all those crazy half-animal things from eating my son-in-law.” This trip, which the White House is hailing as a fact-finding mission, is shaping up to be the most expensive diplomatic excursion since Nixon’s trip to the 9th circle of Dante’s hell. Critics are calling this trip “a fantasy” and “not worth a red cent-aur.” Others are asking, “Will that big lion even budge on trade?” and, “Is that the place with the Hobbits?”

President Trump is denying allegations this trip is all an elaborate ruse to keep his son-and-law from having to testify to Congress this week. “Not at all,” said the President. “Look, I think Aslan will work with me. He’s a big lion and I’m always lyin’, get it? I believe truth is relative. I don’t know what that means exactly, but I think it’s like when all your relatives are over and you tell them how good it is to see them. Or is that a white lion? And Melanie is already collaborating with that White Bitch on a jewelry line. This morning I told Prince Caspian, you know what would make the golden age of Narnia more golden? I giant golden casino, that’s what. Remember how only Nixon could go to China? This is like that, except it’s me and Narnia and I’m sending my son-in-law.”

Many Democrats are concerned the president has not thought through the intricacies and dangers of trying to reach a trade agreement with an alternate dimension. “What’s the problem? Those half-sheep people over there are easily led. Bigly. Look, if there’s no oil or we can’t make money off these animals, we just build a wall around the wardrobe closet. Easy peasy. And I’ll get the fauns to pay for it!”