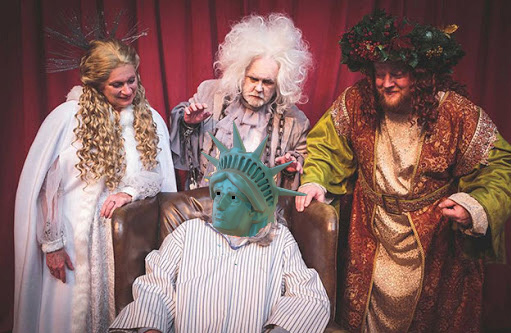 There’s a different kind of War on Christmas occurring, and it’s a little more Ghostbustery than Grinchy. Something occurred to me during a recent conversation with a couple of republicans, well, besides the usual masochistic implications. Another dimension of rightwing madness availed itself, a kind of republican Wrinkle in Le’Guin. The first rightwinger feared our imminent return to communism under more liberal leadership, no surprise there, while the second conveyed a cresting China-angst as Beijing now sits poised to eat our lunch. “Better learn to speak Mandarin, Zano.” So on one side we find a Soviet-style communism, with all the Stalinesque trappings, no doubt courtesy of our Veep and her trusty sidekick, AOC—both secretly from Venezuela—as for that other side, we find China’s quantum economic leap amidst the pandemic. As for these Christmas Ghosts, well, the first is absurd and apparently the threat of China sprung from the void on January 20th. But let’s forget the merits of these arguments for a moment; what struck me is the elegance of the Fox News effect. The GOP keeps its viewership off balance and split-focused between these two ghosts. In this way, all problems occurring today, what many of us refer to as the present, can be duly ignored. Thus we can bypass anything resembling a solution to any problem, indefinitely, which is really cost-effective if you’re, say, Mr. Burns over at the power plant. This also explains how the rightwing position never evolves in an unwanted direction, or, more precisely, in any direction whatsoever. It rings of John Boehner’s recent comment, “What does the GOP stand for anymore?” Were this a chess game, D would have moved their pawn, donning a Lollapalooza shirt, and R would then start to talk about their next move and scratch their collective head. Eventually, Zeno of Elea would be proud, as the sun would gradually deplete its hydrogen supply before their first move. MAGA only pawn in game of life.

So where is the Ghost of Christmas Present hiding in the House that Rupert and Rush built? This is covered in my already established zenwrongness theory, wherein today’s energies are directed toward the invented scandal-of-the-day. This tactic is designed to eclipse anything relevant in the here and now. This relies on the creation of a targeted scandal, complete with just enough factoids to impress and engage the average Fox viewer. These narratives eventually run out of steam when they are replaced, wholesale, with the next Fox News Alert or Q-dropping. This is how they seamlessly shift from Birtherism, to Uranium One, to Benghazi, to Pizzagate, to Spygate, to Burisma, to the dimsurrection of January 6th. It’s a steady stream of Foxal matter that must never cease, or, much like a shark, it will die. Think of it as a self-jumping shark.

Add the Ghost of Present-scandals to those Ghosts of Christmas Past and Future and you start to get a clear picture of how each corner of their consciousness is hijacked, even to the point of denying 3-million Covid related deaths. Tri-infecta?

Past = The horrors of Communism

Present = The Pizzagate of the day

Future = Fear the rise of China

This darting of one’s attention forward and backward reminded me of an old Tom Nairn essay wherein he once described nationalism as Janus-headed, looking backward and forward at the same time. He believed this ability allowed nationalism to act as a necessary “gatekeeper for modernity.” I think the gatekeeper needs glasses. Not only is this sentinel failing to guard our ideological harbor, but I think it started humping a passing cargo freighter. Maybe that’s what happened in the Suez?

Real issues don’t even register with R. Years ago, I compared my list of key concerns with my rightwing counterpart’s, right here on the Discord. Nearly a decade later most of my fears are still looming large, but Poke’s list? Hmmm. With the exception of immigration reform, the items still range from dead wrong to irrelevant. The republican sweet spot.

This three-pronged, Christmas ghost approach continually floods the conservative psyche; it’s why at Memorial Day BBQ no right-leaning type will want to discuss how the latest round of Spygate (the investigation of the investigators) is now 0 for 3. Nor will they want to discuss how the latest Q-prediction missed the mark again, rather spectacularly. Their failure to self-assess their own brand remains Trumpbiquitous. Sorry. But don’t worry, folks, they’ll be spewing some new indefensible position on Labor Day. Shark Weak?

Post these ghosts, there’s simply not a lot of room left in their brains for anything remotely meaningful, which allows their narrow worldview to fester. They will never become disillusioned because the facts will be reshaped, segment by Fox segment, as to forever delegate blame elsewhere.

When our friends across the aisle are finally cornered and forced to actually address something, it tends to have this flavor:

“Any action in the face of a such-n-such a crisis, would only make matters worse for real Americans in real America. No, really.”

Have conservatives ever passed a bill that’s solution-oriented? Their actions are usually designed to protect the status quo. The US is perfect as is so any change is just too risky. When you’re at the top, the only place is down. With that in mind, here’s your next button:

No Change You Can Believe In

This no-change mantra is maya, or illusion. Delusion is a key ingredient in the family of psychiatric disorders called Axis II, or personality disorders, which is the same group I diagnosed the entire GOP with, many moons ago. My assessment has since been validated. As Ken Wilber once said, when science and empiricism are attacked or discredited, the void is often filled by narcissism. It’s also interesting to note how most contemplative philosophers, psychologists, and meditative mystics, stress the importance of focusing on the now, over the past or future. Everyone from Schopenhauer to Tolle to the Buddha himself was a fan of remaining in the moment. They would all question the wisdom of inventing these fears of Christmas past and future, which the Foxlands then top off with a fictional scandal-of-the-day as their pièce de résistance.

The word ‘change’ is right in climate change, so for these folks addressing this problem is already DOA, which won’t change until we’re all RIP. For them anything that threatens the status quo is anathema. Here’s how it will likely play out:

Husband (R-Anywhere): Well, if we’d privatized the water, as I have been saying for years, this would never have happened.

I’m not kidding myself about the use of some related leftward shenanigans, but republicans accomplish these feats with a surgical precision that would make even those cow-mutilating-aliens jealous. This is why they don’t really care much about improving the current situation. For them, whatever is facing this nation, no matter how dire, will never match Fox & Friends’ feigned outrage item of the week. Operation: Deer in the Hannitylights? This isn’t a new thought, as I’ve been raving about this shitznik for years, but the mechanisms are becoming clearer.

The worldview of R has always embraced a political romanticism that hinges on the existence of some archetypal American moment from history, a time when no one questioned the US’s global superiority, each rancher looked like Charlton Heston, toted a gun, and they were all self-made men and, when funds were needed, the rest trickled down from those small-business-friendly barons of the Gilded Age.

Meanwhile, the moguls need all the wealth on the planet because, well, it isn’t rocket science. Oh wait, bad metaphor, it actually is. Soon enough, if you’re not named Musk or Bezos, winning in this new paradigm will be less likely than winning the state lottery, twice, while being struck by lightning. Some of you are saying, well, I’m doing pretty well for myself right now and good for you! But things are about to change. Unless you’re a billionaire, the next phase of human existence is going to be a tad rocky. My sense of humor won’t be the only dry thing in the world. And the only way you’re going to the moon, or Mars, or into high orbit with the in-crowd, is if you volunteer to go first, ala Matt Damon, shit-potato style.

It’s exhausting how exhaustive their thought-hijacking has become, which today translates as:

“If we all work together we can Keep America safe from becoming Finland.”

Riiiight. Let’s fear becoming a country that exists today and whose children are statistically smarter, healthier, richer, and freer than their US counterparts, well, if you believe statistics, polls, and science. Just keep countering this point by equating socialism to Venezuela, never mind how Venezuela was one of the many countries Reagan and Clinton railroaded through tyrannical ‘free’ trade agreements. Just keep whitewashing this stuff for Whitey. And always stay vigilant against the resurgence of those Socialist/Marxists/Trotskyists, or any other ideology that limits the shoveling of all the planet’s resources to the same 12 people in the quickest possible fashion. Let’s allow corporate greed to play out across the globe, championed by its new technocratic overlords. As for the princes and the widening pool of paupers, soon never the Twain shall meet. So let’s all sit on a dock somewhere and dangle our feet in what’s left of our aquatic ecosystems, eh Huckleberry? Mankind’s fin fin fin?

That’s a good place to fin.