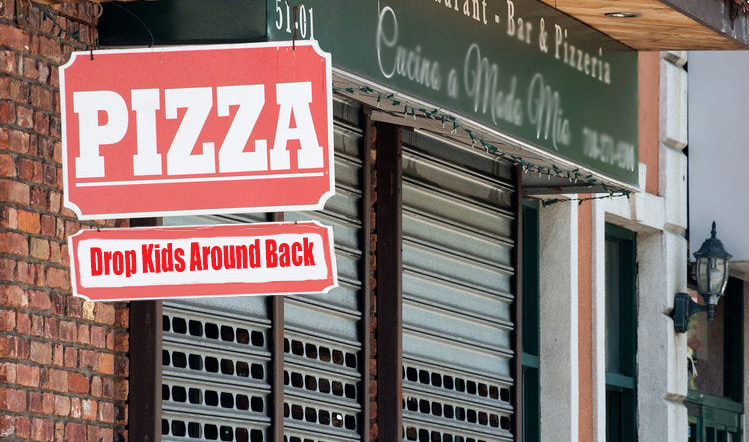 In true bipartisan fashion, President Biden has decided to fulfill at least one QAnon inspired prediction by opening a liberal run, child-sex-trafficking operation out of the basement of Pop’s Pizza in Clifton, NJ. The president hopes this political laurel-leaf will help republicans accept a wildly progressive agenda, not the least of which involves AOC just printing money willy nilly and handing it out to those most undeserving among us. Biden told reporters, “I want to extend universal healthcare to the whole universe, all on the backs of the American entrepreneur. I want it to include illegal aliens, those reptilians, the greys, and those green women Captain Kirk kept banging. Then I’m going to build solar panels on top of wind farms. And I will fund these green monstrosities by taxing the shit out of anyone not driving a Prius or a Tesla. Nuclear facilities will be turned into mall-sized dispensaries, and coal plants will be fumigated and converted into safe spaces for our LGBT communities. Then I’m going to shove Exxon so far up Shell’s ass they will both be thankful they’re petroleum producing companies. Then next week shit’s gonna get progressive.”

Biden went on to tell reporters, “Look folks, Trump didn’t return to power on March 4th, so Q’s batting a thousand, well, if he were the pitcher. And then this week I called Texas republicans ‘neanderthals’ for acting like Covid-cavemen, so I wanted to do something nice for my friends across the aisle. The pizza parlor was actually Hillary’s idea, and we’re even going to have her portrait on the wall, right next to an Epstein Didn’t Kill Himself poster. It’ll be nice to give them all something to shoot up every few days, you know, to get it out of their system. It’s really a nice way to say, hey, we know you rightwingers are all batshit crazy, but you’re still family. Or, is that the Olive Garden slogan? Crap.”

Olive Garden was unavailable for comment, but they would like to add, “You can’t just order a pile of breadsticks for free delivery, you cheap bastards!”

Wow, I guess it’s only when you’re there, you’re family.