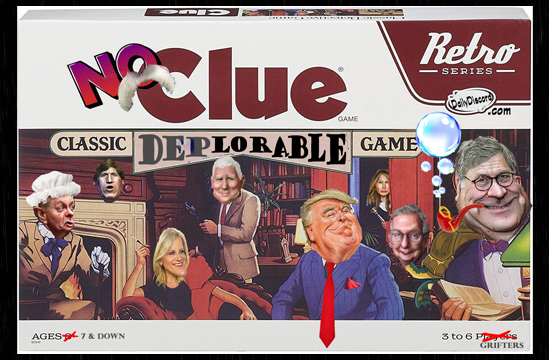 Tweet Tower—Our third world country is showing again, folks …you know, while no one was voting on principle. The picture should be clear in 2020, we take baby steps away from banana republicanism under D and giant leaps toward a failed state under R. The Fox News talking points during the pandemic ramp up angered me a tad more than usual: The media alone is to blame for the virus and the DOW! Sure the lefties hyped this shitznik to a Spinal Tappian 11, but covering the potential demise of an estimated 1.7 million Americans should rank as newsworthy. But I do like our president’s recent tack, from it’s a hoax, it’s a hoax, it’s a hoax …we’re all gonna die approach to information dissemination. How does that heavy pandemic coverage stack up against our ‘least tests in the West’ approach to containment? Or, maybe the 0.00 percent worth of accurate information coming from our president’s mouth or his twitter feed. Or, our initial haphazard to nonexistent federal response. Who knew gutting agencies and firing everyone with an IQ above a turnip could lead to something like this? Oh, right …everyone with an IQ above a turnip.

And all this ‘winning’ to the backdrop of these fun facts: 38-million uninsured citizens, probably triple that are under-insured or unwilling to pay for a PCP visit, no paid sick leave, half the country living paycheck to paycheck, and not only his relentless attempts to defund the CDC but the fact that he’s still trying to do it, even today.  For the planned Main Street bailout, it’ll be fun to watch republicans take socialism for a spin around the block, but no unnecessary travel! Hey, but Guatemalan refugees will think twice before that whole long walk north thing, eh? It’s not unpatriotic for me, or for anyone else, to call this country a disgrace, but only because This.Country.Is.A.disgrace. But hit that read more button, because I have my next grand prediction!

So the problem is not that we have a slew of acting-deputy-assistants reporting to someone’s brother-in-law to head each .gov agency, or that our first COVEFE-19 Czar placed the initial response in Jesus’s hands, it’s all Rachel Maddow’s fault? …just like Barney Frank caused the Great Recession, Iraq was an intelligence failure, we don’t torture people, or, my favorite, each and every morning before the chime of every Wall Street bell, money trickles down from Mogul Mountain like tiny beads of glistening dew. If you can’t see that republicans are the crooks in this passion play, then hindsight isn’t 2020.

Today we find our president is denying he knew anything about his own attempts to dismantle the CDC, and this is a rare instance wherein I believe him. He doesn’t know what he’s gutting, or attempting to kill, so long as the government ends up small enough to drown in a bathtub.

Fun Fact: I’m finally in agreement with republicans! What’s left of the Federal government should be drowned in a bathtub. Someone call Bed, Bath, & Beyond, Nurse Ratched, and that weird assassin guy from No Country For Old Men.

I realize we’re collecting 25th Amendment moments, but if Trump knew this was going to be ten to twenty times more deadly than the flu: what did he nose, and when did he blow it? You can probably add that to his growing list of impeachable offenses. Trump’s response does have a failed-state flair, doesn’t it? At least my warnings are finally coming to screwition. Trump’s leadership in a crisis reminds me of that old Esurance commercial: 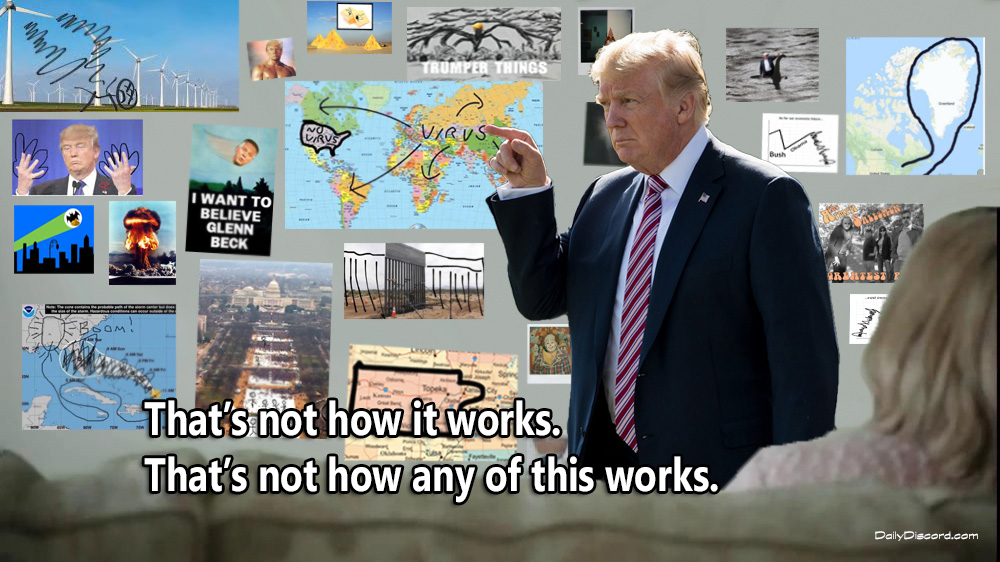 I’m not blaming Trump for the virus, but we will see is it’s not about the crisis, it’s all the other dumb decisions on the lead up to said crisis. We will be hit harder than most in the west under republican leadership, because we live in a third world country. Lest we forget, Trump has also been manhandling the Fed to keep interest rates artificially low while simultaneously gutting taxes across the board during a surplus. The rightwing is okay with this virus-spawned stimulus, but where’s it all going again? Thanks to Trump’s handiwork, which parallels the evils of Bush, we are poised for a spectacular collapse #TrumpocalypseSoon.

Speaking of Barney Frank, this next prediction will blow your mind, well …someday. Don’t worry, future gloating sold separately. The below image is a comparison of the Great Recession (Dubya) and the projected Best Depression (Trump). I am willing to bet this will closely parallel the economic dynamics of this crisis or the inevitable next Trump crisis.

Here’s my next bombshell prediction (Kidding, this is my ancient deplorable prediction, but further honed): 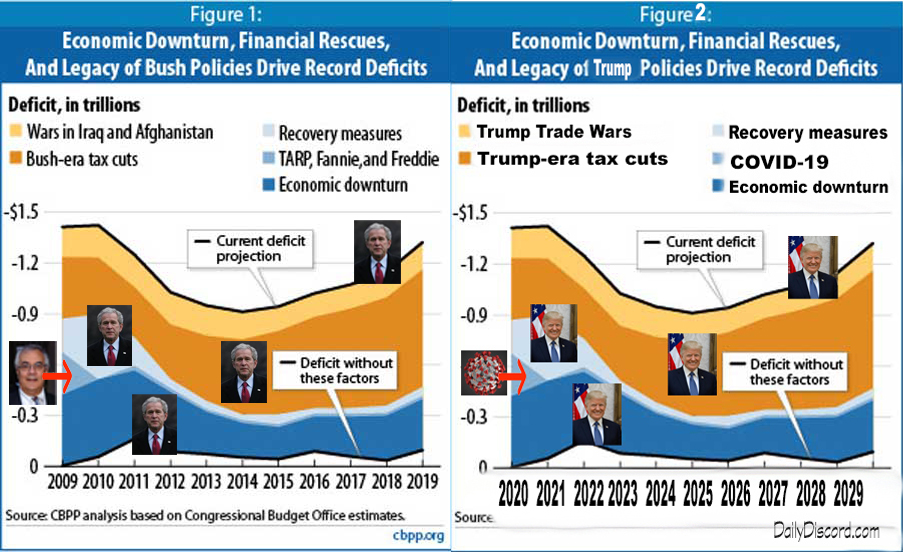 Figure 1 (left): The numbers in this graph are courtesy of our Congressional Budget Office (CBO). They highlight the cost realities of the Great Recession, but for some reason Dubya’s unfunded Medicare Part-D prescription program is not included. Forbes estimates this program cost us 17 trillion and is often hailed as the worst hatched entitlement program in history, so why did the CBO leave it out? It goes back to my old theory, republicans do so many terrible things they bank on no one being able to keep up.

Also, Barney Frank did not cause the housing bubble, in fact, he tried to warn Bush, but was duly ignored. Even if Mr. Frank was wholly responsible for the Fannie Freddie debacle it was a small part of a shittier picture …at least according to the government’s account of their spending and how quickly the housing market recovered.

Figure 2 (right): This side of the above image represents my projected Trumpian collapse. This won’t match exactly, but it will be similar enough for me to link back to …provided the World Wide Web is still a thing.

Reminder: Liberals don’t always have the solution, but republicans are always the problem.

So I’ll ask again, why are they still a thing? Even the dodo birds eventually had the good sense to, uh, go the way of the dodo bird. Luckily I have been stocking up on TP since they canceled Ash vs Evil Dead. Hey, but being holed-up at Homebase Zano gives me time to link back to my endless prognostic wizardry:

“The tragedy is how long it took to pull out of this Bushian nosedive and how eager this country was to go not so gently back into that far right, aka, blow up deficits, other countries, and everything in between. It took a special list of imbecilic ingredients to bring us back to this brink so soon. Sometimes Karma is a bitch and other times she’s a Fury with extreme PMS.” —4/19

While you are trapped at home, why not read that whole article? You’ll be sad you did! Paul Waldman, one of my favs, just rewrote one of my articles from the early Pleistocene era, here. Yep, you heard it all here first. Zano 4/19 again:

“We are on the edge or ruin. Our state of the union is akin to that moment when Wile E. Coyote no longer has any rock, ledge, or wooden plank between himself and the canyon floor, but gravity hasn’t quite kicked in yet.”

Fast forward a year later and, wow, the gravity of the situation becomes clear. The canyon floor is coming into focus. My theory from almost twenty years ago can be summarized as: we have one problem in this country and it’s the republican party. Fast forward to today: Politicus: Republicans are still Americas biggest threat. While everyone is isolated I feel so validated.

[Cabin-covid-fever joke quarantined by the CDC.]

Everyone be safe out there and use your time wisely, like by rereading my old articles! You’ll be sad you did.

*As for the No Clue image, depicting Lindsey Graham as Mrs. Peacock made all the effort worthwhile.