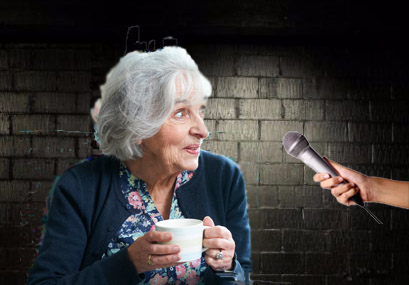 Queens, NY—After a heated exchange, the competency and possible criminality of president Trump’s grade school teacher is under scrutiny at this hour. When the retired 87-year-old teacher, Mrs. Magaluso, was questioned as to whether or not she received payment for allowing the current president to graduate elementary school, she clearly dodged the question by changing the subject to her family’s coveted (or covfefe) lasagna recipe. Refusing to let this old fish wriggle off the hook, The Discord’s own Alex Bone pressed Trump’s former teacher further by asking the question: “What did you know, Mrs. Magaluso, and when did you know he didn’t know it?”

After Mrs. Magaluso was reminded of the penalties for certain white collar crimes, she responded, “At my age they are referred to as ‘silver collar crimes’, therefore chronologically downgraded. A similar thing happened to that poor planet Pluto. Over the decades I taught my students that Pluto was a planet. Now I feel like the whole solar system is a lie. Would you like some of that lasagna, young man? I made a big tray yesterday.”

Bone, the adamant professional, responded, “I’m going to make this a multiple choice question, which I hope someone with your background can appreciate: A. Did you receive any money directly or indirectly from Fred Trump? B. Were you threatened by anyone in the Trump crime family to pass young Donald? C. Was allowing him to graduate to middle school better than seeing his fat orange face again next year? D. Were you doing a lot of meth back then, long before meth was even a thing?, or D. Both A and D in HD.

Continued peppering from Mr. Bone eventually frustrated the teacher. And during one exchange she responded by saying, “You’re going to be staying after class, Mr. Bone, which per your MyLife Reputation score is not your first rodeo. I can use the Joogle too, Mr. Smartypants!” At one point during the interview the retired school teacher “accidentally” dumped her hot tea on Alex Bone’s groin. Mr. Bone has accepted some lasagna in lieu of damages.

*Goodness Gracious Great Balls of Fire joke extinguished by the editor. And recent studies suggest no one with ADHD would make it all the way to that attention deficit punchline.