We have successfully made the transition from ‘know hope’ to ‘no hope’. In today’s political circus, the Freedom Caucus is now all the rage. Are you kidding me? The only thing standing between El Trumpedente and everything he wants for Christmas is a pack of hyenas? Through the magic of redistricting, we must support the minority of the minority? Who wants to cheer on the frickin’ Freedom Caucus? Then again, they did save Obamacare. The enemy of my enemy is my friend’s enema? I don’t even follow that one. People are concerned about republican in-fighting. Don’t be. When it counts, conservative-types are always united in their wrongness. Republicans do impress me in one sense as they’ve discovered so many distinct, yet shitty factions, views and philosophies. Multinefarious? Diversdefecation? Fine, I’ll work on that one.

The Freedom Caucasus (FC) is essentially the result of the Tea Bag Initiative in politician form. TBI? This caucus is now the bane of all of our existences.

So who exactly are these freedom people, Zano, and where do they live?

I’m glad you asked, oh imaginary reader. These FC peeps are dispersed throughout the east, but if you focus west of the Mississippi, a clear pattern emerges. They have political power in Wyoming, the Idaho panhandle (squatch country), Kansas (home of Bad Economies Matter), southern New Mexico (UFOs crash here), and eastern Colorado (the flat empty, keep driving to Denver at 90mph part). And in Arizona they also rule just west of where I live (aka: the Land of Enchanted Meth Labs).

Republicans want our whole country to be like real America. From tweets to shining tweaks? But, like it or not, the Tea Party has been very effective in the 21st century for three main reasons: 1. unlike their counterparts, republican grass roots movements can stay angry, motivated and focused, 2. simple messages can be repeated often through rightwing media, and: 3. gerrymandering is rural America’s best friend …well, that and NASCAR. Talladega Slights?

It’s hard being liberal, which is fraught with nuance, forethought, and complexity. The rightwing media has it easy peasy. You get spoon fed a handful of Fox News talking points and then simply Reince, Priebus, Repeat. It’s so easy a caveman can do it. See Neanderthals aren’t extinct, in fact they hold both houses of Congress. What’s always cracked me up is how republicans think they’re the independent thinkers among us. Don’t take my word for it. In your own personal life has any of your republican friends ever deviated even a micron from a Fox News talking point? Fellow Discordians excluded.

Essentially all the people who never got around to leaving their hometown often get rewarded with 3x the representation as those dazzling urbanites among us. When is the electoral college going to get its GED? Whatever the initial intention of the electoral college was, you broke it (see: Bush and Trump administrations). And, how and when will gerrymandering become illegal? How long will the majority be held hostage to the populist minority?

Meanwhile a leftwing RESIST movement emerges, but is it remotely sustainable? Thus my old joke: 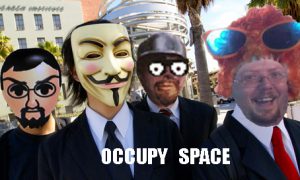 That’s me on the left. No grey pixels back then.

Will the RESIST movement show results in the midterms? Can RESIST even persist? It’s always been the wrong & motivated vs. the correct & apathetic. Does the Trump- swamp signify the end of the GOP? I don’t think so. Republican ignorance is, like Julius Caesar asserts, as constant as the northern star. Wait, apparently that’s been dimming for centuries as well.

The Zano Nation has been encouraging our republican friends to go away quietly for over a decade now, but only because they add little value to the public discourse. We have one semi-legit political party and the other one holds a super majority. Half our country remains completely blinded to their own inability to lead. The party of Nixon, Dublya and Trump still think they have mad skills (well, they have it half right). If you keep doubling down on political ineptitude, you eventually reach Freedom Caucus levels.

There’s few people as pessimistic about our current political situation as yours truly, but Robert Reich is close. He has become the face of the RESIST movement.

But here’s where we disagree:

“It’s important to distinguish between Republicans we disagree with or even think may be actively doing wrong—say, taking health insurance away from millions of people in blind pursuit of an ideological passion—and people like Trump who are dangerous because they have passed beyond the ability to actively reason with evidence about the world.”

At this late stage of our democracy, what vast distinction remains between wrong and wronger? In 2017 all republicans are complicit in this populist nightmare. All the coherent republicans, at least in the field of journalism, no longer identify themselves as such. The handful of the sane variety seem to have whittled themselves down over the years. One of my 2016 posts hailed David Frum as the last hold out. His last Atlantic article brings that into question. He thinks Trump may rebound and pull a Clinton. You know who could have pulled a Clinton? Clinton. Although his article is very critical, he feels it’s not over yet for the Trumpster. One of the reasons he cites is how Trump’s personal agenda is “winning”:

“The Trump brand is thriving. His family is planning a second hotel in Washington, D.C.  He is busily promoting his properties. He has paid little political price for violating his promises not to bring his children into government.”

He is supposed to be paying a price, Dave, and you are supposed to be one of the last sane republicans holding him accountable. When the train wreck ensues, and it will, even those Teflon conservatives among us are going to have a hard time convincing independents that the Grand Old Party is anything but the promised shit show.

If republicans won the presidency, any republican, I predicted nation wide carnage would ensue. Regardless how Trump goes down, this remains a super majority that will likely be very damaging to our world, our economy, and our checks and balances. Let’s hope I’m wrong, like that time I sunk much of my investments into the Motorola Pocket Exploder. It sounded exciting. Meanwhile, Mr. Frum, Trump will not be pulling a Clinton. I think he’ll be lucky to pull a Harding, Polk or a Coolidge. RESIST.

*The cool, hard Polk joke was removed by the editor.