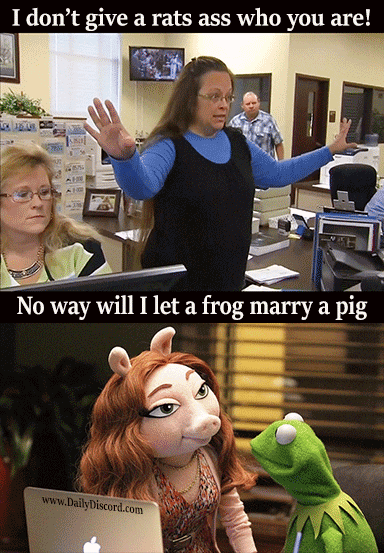 Elizabethtown, KY—The Muppets are up in arms over controversial comments made by Kentucky clerk, Kim Davis. Not only is she refusing to marry gays, but she is now refusing to marry Muppets. Ms. Davis told The Discord, “I think if a Muppet marries another Muppet we are some how condoning a form of bestiality. I am not marrying Ernie and Bert and I am certainly not allowing a marriage between Grover and Gonzo, when I don’t even know exactly what the F they are.”

Ernie and Bert plan to file a lawsuit on the Kentucky court in question. “We shouldn’t have to put up with this shit,” said Bert. “I put up with enough shit from Ernie—always making me wear a French maid’s outfit. I’m sick of it!”

Senator John Q. Republican added, “You can’t give these Muppets an inch or they’ll take a mile. Remember when they took Manhattan? Yeah, well I do. Screw those fuzzy little bastards.”

Ms. Davis plans to remain in jail rather than see same-sex Muppet marriages (SS&MM). “I have an image in my head of Big Bird and snuffleupagus going at it. It’s not something you can easily shake. Jesus lived in the time of the snuffleupagus, so…uh, I don’t know where I’m going with this.”

The voice of many of the Muppets, Frank Oz, is reportedly furious as he feels his little friends are getting a raw deal. “Some of these creatures truly love one another and think Jim would have wanted them to get all freaky with each other. I know for a fact Telly the Monster and Oscar the Grouch are taking it in the trash can. And the Cookie Monster doesn’t just crave cookies, just ask that hippy chick Muppet with the big lips. I am personally hoping The Amazing Mumford and The Count hook up. They have so much in common! I know Mumford complains when their together that The Count keeps saying, ‘One, two, three…three instances of sexual tension, mwah hah, hah, hah!’ I can see how that can be a turn off.”