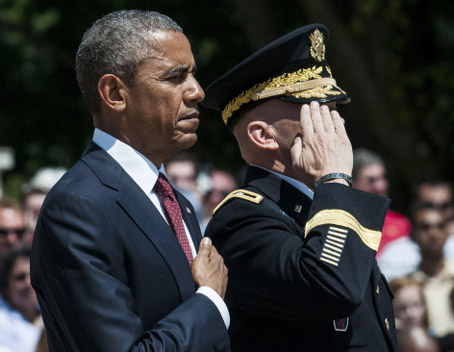 Arlington, VA—President Obama created quite the shit-storm today after a speech that many are calling “really bad.” Obama never mentioned the military during his 34 minute speech, but he did mention himself 23 times and Obamacare 12 times. This omission of anything relevant to those lost in battle is being considered a snub by military personnel and their families.

Obama looked almost jovial as he said, “Let’s not forget those who made the ultimate sacrifice, their paychecks, so that I could personally—or at least indirectly through government programs—support them for their braveness throughout their lifespans.”

Obama went on to say, “And lest we forget the hipsters and their courageous decision to drink Pabst Blue Ribbon, instead of beer with any actual flavor. I think that shows both outstanding character and conviction. Blessed are the liberal art folks, who can’t find anything relevant to do in our society except vote for people like me. I would say God bless these folks, had I a religious bone in my body. But I don’t (laughs). What we really need to begin is the hard work, and by hard I mean a move toward a three day work week, which if I’m doing my math correctly, means a four day weekend. This is even more time for people to spend government handouts and become more dependent on the government in the future.”

*Actually Obama did honor those fallen, by thinking twice before sticking them in between a Sunni and Shiite civil war, by relying more heavily on regional forces, drones, and intelligence. We may yet become more drawn in to this growing debacle, but Obama honors those lost by at least attempting to lose less.