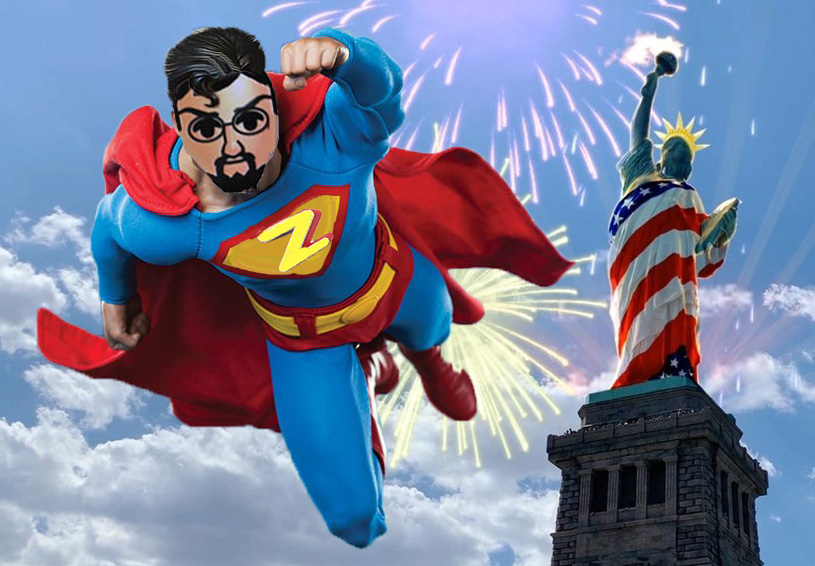 Zano Nation, activate, form of authoritarian savior! Despite my last post, I do consider myself a patriot, except during three of the last six Superbowls. At the very least I love this planet, the one on which my country happens to reside. Did I not root for Earth in the movie Independence Day, Earth vs the Flying Saucers, Battlefield Earth, Earth vs The Spider (the original and the MST version), not to mention every War of Worlds movie ever made, even the one with Tom Cruise? Let that sink in for a minute …even the one with Tom Cruise. But today insight itself is shunned, which is just what the giant spider wants! My blogging started as a condemnation of republican thought since as far back as the premiere of American Idol. I still believe, Sanjaya! But, if our democracy is determined to shift toward a more imperial presidency, why not prop up a progressive Ubermensch over a deplorable one? Let’s imagine a world run by a more spiritually-centered, liberal fascist …you know, a better despot, a leader who both lifts and separates …wait, or is that from those Cross Your Heart Bra commercials? If we’re deadset on despotism, let’s upgrade MAGA to Make Autocracies Great Again. Why have an Ass-clown Hitler when we could install a Dalai Stalin, or a Gengis Gandhi, or even a Lenin Lennon?

A NYTs article summarizes Trump’s acquittal as the coveted, we’re in charge, so sit the F down defense. Informed Comment hits a similar “Leader is State” and “Oversight is Harassment” theme. As a former compliance officer, the sight of a truth teller being marched off of WH’s grounds is chilling. Face it, the tool of impeachment has been retooled by a tool; it’s been reduced to the English bobby analogy, stop or I’ll say stop again! In related news, the English bobby who initially yelled ‘stop’ is being detained without due process and scheduled for waterboarding.

But I’m not trying to convince our woefully uninformed electorate of any of this ‘last days of Rome’ schitznik, instead, I’m here today to seize power at this critical juncture. To be clear, any move away from democracy is not my first choice, but since we’ve already embraced what I call the scheissgeist of our time, let’s have this ‘road more traveled’ linked to some better despotorial outcomes. Why not contemplate the rise of an integral strongman? I realize a liberal/integralist is an oxymoron, but so am I. On that note, I have the perfect candidate in mind. We’re both very close, in fact, you could say we’re almost inseparable—except during out of body experiences and when the occasional ‘damning video evidence’ surfaces.

And with that I’m announcing my candidacy for Imperial President. Since both US parties suck, my new platform will borrow one cup from liberalism, and zero teaspoons of republicanism, but only because the best part of conservatism was left in a flaming bag on McConnell’s porch.

[Winslow here: at least you didn’t use the old, the best part of conservatism trickled-down Reagan’s economy, bit.]

Nietzsche described these last men of any given republic, as those “dangerous, contemptible things,” who are “the most harmful to the species because they preserve their existence as much at the expense of the truth as at the expense of the future.” Sound familiar? I would refer you to the last SOTU, but I didn’t understand that either.

Embrace whatever life spews [CHECK] See: all my dystopic yuck yucks here on The ‘Cord, and my chunk chunks during the last Monte V. happy hour.

Growth is painful [CHECK] …why I go to my dermatologist more regularly these days.

Abstain from any and all alcoholic beverages …  [Um, CHECK Please *burp*].

Anyway, what Immanuel Kant was trying to tell us is how true causation derives …fine, you got me on that last one. Here’s my theory on that: Nietzsche couldn’t get a proper craft brew past that monstrous mustache of his. Rise of Uberstache? I drink therefore I am? Existential Brews?

Anyway, here are my decrees on day one, so hear ye, hear ye!

On Day One: All drugs are now legal, but they come with educational material slightly above that of the reading level of the average republican. There’s more than one way to skin a cat. Actually skinning cats will still be frowned upon.

On Day One: Whereas I would not make vegan diets mandatory, I would only allow the lawful consumption of the Annex burger with grilled onions, which comes with a free beer on Mondays! Yeah, F%^& Nietzsche. I’m over it. On that note, with absolute power comes Absolute Vodka.

On Day One: All FDA regulations gutted by the Trump administration will be restored to their former glory, posthaste, as the environmental shitstorm draws nigh. Trumpocalypse Now? I aim to fit OCSEA with some choice jackboots, so polluters beware! Whereas I wouldn’t outlaw any and all oil drilling outright, I would limit it to the backyards of key republican politicians. Drill, baby, drill! Nightime operational hours only.

On Day One: Keeping with that ending fossil fuel theme, I will erect enough wind farms to blow the rest of Trump’s wall over. Initial wind blow-overage-coverage, here. No Viagra needed.

On Day One: Any judge appointed by Donald J. Trump will be banished, henceforth, to act out a lifetime of reality court television reruns. But, if they weren’t portrayed in the originally aired episodes, I will have to consult my quantum court stenographer for guidance. Oh, and Merrick Garland is already booked to host the first season, or at least when he’s not too busy being Chief Justice Dredd.

Hint of the Day:

His gavel will have Thor’s hammer qualities that can crush both bone and Foxal matter.

On Day One: All non-essential plastics are henceforth forbidden! One month after my biggest inauguration crowd ever, any citizen found with a plastic bag on their premise or person will be forced to watch all of my Search Truth Quest videos and write positive Youtube & Yelp reviews—except for the Lowell Incident, of course, because power has its limits.

*Those who ignore my new plasiticular regulations will be sent to the Sargasso Front to serve a lifetime tour of removing plastic from the ocean surface with shovels. It doesn’t have to make sense, hell, the GOP never did. Oh, and the shovels will be made of plastic, just to mess with their heads.

On Day One: Mandatory meditation hour for all citizens. There will be different time slots available for scheduling, of course, because I’m not a complete asshole. Andrew Sullivan just critiqued Ezra Klein’s new book Why We’re Polarized and downplayed Ezra’s emphasis on meditation as a potential cure for our current societal and political predicament. Andrew is very wrong on this one. Such practices are integral to a society’s ability to rise above a more tribal mindset. Here’s my push for meditation and a Unity Psychology back in 2014. First Discord reference I could find, here.

[Better Than Ezra Joke removed due to copyright infringement.]

On Day One: Universal healthcare will not only be single-payer, but it will also be Only-Payer. All hospital lobbies will have holographic versions of the cast from The View, who will check you in, and perform the surgery. Also, Hugo Chavez and Sean Penn movies will be played in a loop in every lobby, 24/7 …just because. Oh, and maybe a nice AOC mini-series, narrated by Maxine Waters. Feel the Bern units sold separately.

On Day One: Micro-doses of psilocybin will be added to our water supply to decrease anxiety, depression, inflammation, fights addiction, and promote a rise in the national consciousness that could save this nation from its darker impulses. You might think this one’s a joke, but I’m serious. This country is the joke, and microdoses of magic mushrooms can fix that shit. I will call this initiative: Operation Enduring Unicorn. It even has implications for climate change, here. Evolutionarily speaking, you’ve all had millions of years to muster your neural networks beyond that of a Nazi level of consciousness. You failed. Meditate and take your medicine. Growing up is now mandatory. This will be an over 21 thing, of course, but then like the movie Logan’s Run you’ll be dragged willing or otherwise into the anti-Muggle machine. Results may vary. Cue sinister laugh.

On Day One: Fox News will not be pulled off the air, but I get to add whatever I want along a ticker that will scroll across the top of the screen during all programming. Think of it as live-tweeting from the emperor, but with a tad more attention to grammar. Fox News will also come with a warning label: discourse damaging to the public. 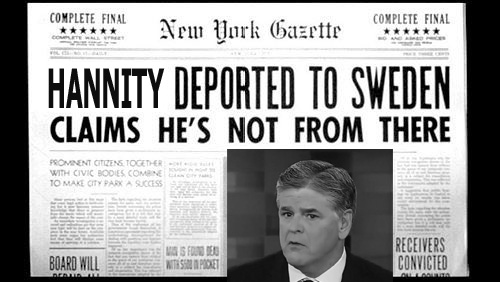 *Hat tip out to Johnny Dangerously.

On Day One: If and when I do restore a rightful democracy, there will be no electoral college, no gerrymandering, no voter suppression, and no foreign interference, as opposed to encouraging it. The US will embrace Ken Wilber’s model of voting based on consciousness development, for example, a Nazi would get one vote and the Boddhisatva would get four, one vote for each level of consciousness. You don’t have to understand, because for the time being this is not a democracy. Oh, if they argue, we just say, but, hey, you’re # 1 and they’ll lap that shit up. Math is not their thing (see: mounting deficits during a surplus).

On Day One: Anyone who allows their dog to crap on my lawn is looking at twenty to life. You people are just lucky I don’t have a lawn …or a life.

On Day One: I will actually dissolve the separation of church and state, but only to enforce Christopher Hitchens’ Ten Commandments. Oh, and tax breaks are available for those who contemplate the Flying Spaghetti monster during meditation hour. 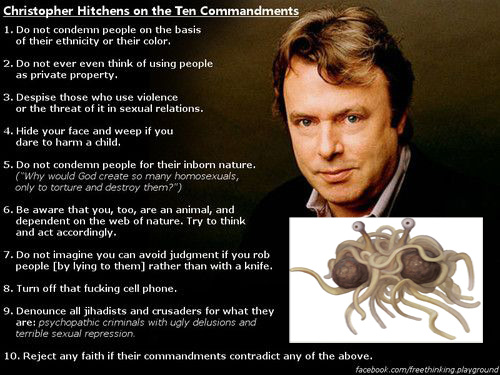 Oh, and I tried to purchase a Super Game ad to announce my candidacy, one that would make fun of both Bloomberg’s size and Trump’s weight, but I couldn’t afford it. Instead, I just scrawled it on the men’s room wall at Sporto’s during the game. Baby steps.

*Winslow here: I tried to get those umlauts in for the Neitzche bit, but the Bezos drone never arrived.