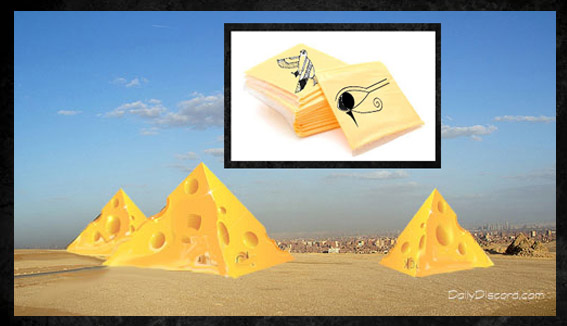 Cairo, EG—The earliest-known individually-wrapped cheese slice was discovered during a recent Egyptian cheesecavation on the Giza platter. The newly unearthed tomb of Tutankraftun Havarti II also points to the existence of a ruler named Ahkenckolbyparmen III. This little-known pharaoh was apparently the first to combine parmigiano-reggiano in the same container for widespread distribution throughout the coveted Trans-Asiago Trader Joe’s route. Soon after, parmaceuticals became the scourge of the ancient world.

According to the hieroglyphics adorning the ancient tomb, Ahkenckolbyparmen, the creator of the parmigiano-reggiano combo, later went on to found a Rome-like state along the Nile river valley. The pharaoh only ruled from 1291 B.C.E. until a few weeks later, however, as the new city-state was sacked by neighbors complaining “the whole place smelled like old socks.”

Dr. Sterling Hogbein said, “The cheese appears to be individually-wrapped and sealed for eternity, which makes sense as historically the Egyptians are the embalming preservation gurus of the planet. Yes, they also invented the Twinkie. These folks have the oldest mummies, the oldest beer, and what goes best with beer? Right, peanuts! …ahh, but we haven’t found any peanuts in the tomb yet. Maybe they were allergic.”

Despite some skeptics, Dr. Hogbein  remains adamant he has hit the Egyptian Colby-Jack pot. He hopes this discovery will finally place him firmly in the annals of cheese and cheese food products alike. Prominent Egyptologists, however, claim the story has more holes than a block of Swiss, and they are calling Hogbein’s theory “a load of provolone.”

Despite video evidence, the prominent archeologist is denying allegations the cheese was made by Kraft and the hieroglyphic wrappers presented as proof were drawn by a Sharpie over at the 4th St. Tavern. Meanwhile, Cheezitologists contest Dr. Hogbein’s timeframes and date the hieroglyphs back to the pre-Gruyereian period during the reign of Gorgonzola IV.

[Winslow: This went on for 17 more, even cheesier jokes, so I’m calling it. Don’t think of this as stomping on someone’s 1st Amendment rights, it’s all for the greater gouda.]