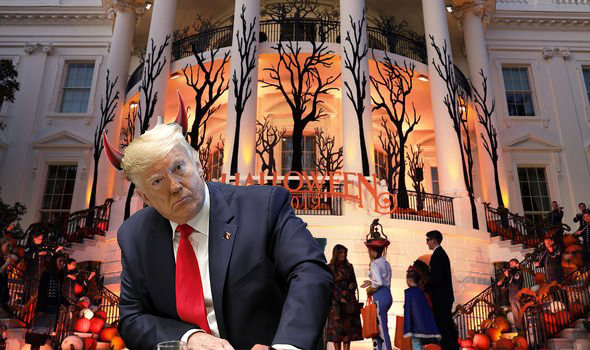 Tweet Tower—In preparation for the “liberal tricks” associated with Halloween, President Trump floated the idea of signing an executive order declaring several of his properties in a Pre-State of Emergency. The order would have allowed the deployment of 2,000 military troops to cover The Donald’s real estate assets for any potential egging, toilet papering or other seasonal mischief associated with Halloween. Critics of the move are calling this one Pumpkin-gate. The president tweeted, but quickly deleted, a warning that any attempted flaming-bag-of-dog-poo stunts would be met with sniper fire. When asked about the legal rationale for such an order, Trump said his acting-acting head of Homeland Security told his lawyer’s lawyer’s lawyer the following: “Technically these are the same troops Trump illegally deployed to the border to guard, paint, and/or build his wall, so arguably this is a much better misuse of military personnel.” Ultimately a staffer shredded the executive order, but failed to take it out of the black binder first and promptly broke the machine.

Trump is not denying his controversial idea and tweeted, “Everyone wants to save my Miami Doral resort! Saving the Doral should be bipartisan. Even that little bitch Thunberg should have liked this idea!! Liberals are going to do stuff to my property and my generals should be protecting my assets. There’s also the usual threat Halloween brings to my real estate. My Pine Hills golf club is on the edge of the Pine Barrens and is always under clear threat from the NJ Devil, and sometimes the whole fucking hockey team. My Hudson Valley golf course is being terrorized by a headless horseman, some German asshole, and I am happy to say he is now on the headless terrorist watch list.”

Roland the Headless Thompson Gunner was unavailable for comment …well, technically he was available but, without a head, he couldn’t comment.