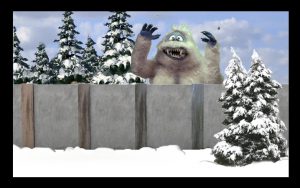 The Great White North—President Trump recently relayed to Homeland Security his intention of building a northern border wall between the U.S. and Canada. At a rally in Orlando, Florida the president explained, “We need to keep out all the Yetis, the Bumbles, the Eskimos and those Abominable Hockey Players. That whole country could win an ugly sweater contest. It could. I’m also not happy with Trudeau. Not happy! And don’t worry about the cost, because I’m going to get Santa’s factory elves to pay for it.”

Canadian Prime Minister Justin Trudeau responded to the president’s comments today, “It’s more ridiculous than his usual level of ridiculousness. Mr. Trump is not remotely familiar with our local flora and fauna. A border wall might stop a juvenile Mountain Troll, or a family of ice weasels, but a Canadian Bumble will go right over that wall and then bounce …because that’s what they do; they bounce. Besides, does Mr. Trump even realize how many Americans are seeking sponsorship in our country? Two words ‘A Lot’, or is that one word. I always forget.”

Critics claim the president’s suggestion shows a tone deafness to both the Christmas tradition and the encroaching negative impact of climate change. Due to melting glaciers, Bumbles have recently been migrating further south to forage for food and to obtain enough signatures to run for City Council.

In related news, woman sues after discovering Bumble Bee Tuna not made from either honey, or real Bumbles.