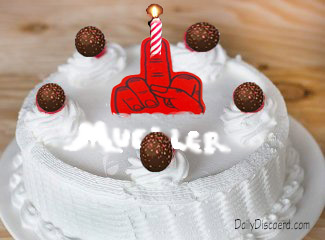 FBI Headquarters—In honor of the Russia investigation turning one year old this week, Donald Trump sent the Special Counsel a birthday cake. The cake arrived at FBI headquarters Attention: Robert Mueller with a short handwritten note from the president. Fine, it was a tweet someone transcribed. The event confused the House Intelligence chairman, Devin Nunes, who doesn’t know which leak is up. He immediately called the move an “obstruction of frosting,” before leaking the recipe back to the Feds. A Trump tweet shortly followed from the president: “Hey, Nunes, wait for my lead! #Numbnuts.”

President Trump also sent along a card that read, “Happy Birthday, Mr. Mueller! You can blow this out, and then you can blow me. Notice your present isn’t wrapped, but don’t let that stop you from wrapping this shit up. You’re lucky my Secretary of Defense talked me out of the white powder gag. Would fake Anthrax be considered Spamthrax? I’m asking for a friend.”

The cake itself was specially baked at Trump’s Florida resort, Mar-a-Lago. Staffers claim the cake was made with free range cow patties and each of the five dingleberry’s were hand picked by a Trump staffer, who claims to have to do stuff like that regularly. He then added, “Please kill me.”