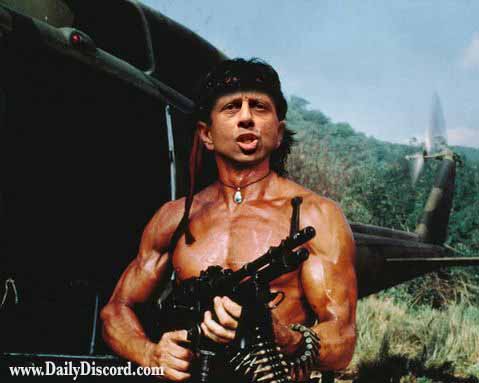 Batshit Rouge, LA—Governor of Louisiana, Bobby Jindal, is still not happy about missing the not-ready-for-prime-time republican debacle—er, debate. Fox News chose only the top ten contenders for this event, via their own questionable polling system. This left “Bobby” Jindal an outcast, wandering the country aimlessly.

At a press conference today Jindal held up a Spinal Tap T-shirt that read Our Debaters Should Go To Eleven. “I am going to war with the RNC!” said Jindal. “I will attack them with this large knife, with the back edge all serrated like. What do they call those? Anyway, you think Trump is terrorizing this circus, wait until they get a load of me.” He then started manically laughing and yelling, “Bring me The Batman. Bring me The Donald, hah, hah, hah!”

Jindal remains opposed to the RNC’s current debate rules and told reporters, “Democracy is messy! I plan to make it even messier by weilding my 2nd Amendment rights. I didn’t start this war. They drew first blood. Come with me if you want to debate!”

When a reporter pointed out how his last statement was actually a variation of a Schwarzenegger quote, Jindal opened fire on the crowd, yelling, “You’ve angered me, you’ve angered my Super PAC! We must stop being the party of stupid! I am not an animal, I am a human being. Damn the torpedoes! We will never surrender! A seven nation army couldn’t hold me back! Wreak havoc and let fly the dogs of—”

At that moment Jindal was gunned down by a fellow conservative. A witness, John Q. Republican, said, “Jindal was speaking to a predominately rightwing audience, so he never stood a chance. This would have been a massacre over at the Bernie rally. With more folks packing at such events, we could end all mass-debater shootings. The only answer to a bad debater with a gun, is a good debater with a gun. I’m surprised the Megyn Kelly/Trump thing ended peaceably. I think they dodged a bullet that night, literally.”