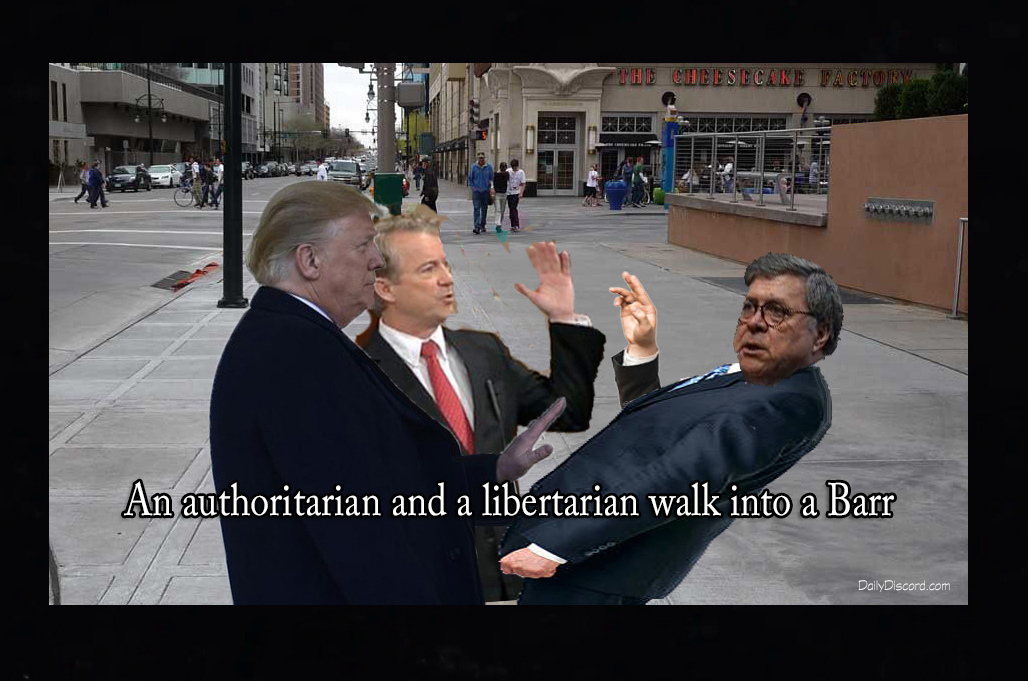 Today an untethered president is scouring the halls of 1600 Pennsylvania Avenue rooting out his enemies one by one, aka anyone with a conscience or an IQ above that of a turnip. EthicsCleansing? The political purge is occurring, folks, all while Trump and his cronies binge on the last of our resources. Bull-imia? Tweeting disorder? Maybe a Norse heritage is why our pillage idiot won’t concede the next election, and why he remains so fixated on buying Greenland [‘Thor loser’ joke ransacked by maurauders]. Who needs smart people in our intelligence community anyway? Incompetent loyalist-hacks are people too. What’s the worst that could happen? The only thing The GOP requires from our intelligence community is compliance, especially during the art of their insidious deals, such as: war, the resulting contract deals, the perpetuation of our military-industrial complex, the designation of an agreeable ‘boogeyman’ country, and, of course, those trumped-up charges to haul in any perceived political enemies. Longterm consequences are someone else’s problem. On the bright side, no potassium supplements needed in this brave new republic. For The GOP it’s always been about making a quick buck, and F everything and everyone else who stands in their way. Shame that doesn’t fit on a button.

Truth be told, it’s not entirely Trump’s fault for the current Democide as someone was bound to attempt a variation of this with polarization levels ebbing ever larger on the horizon. Even the last bastion of our supposedly neutral federal civil servants are not immune to the current political scheissgiest. You’re either with Trump or against him. Oh, and the WH Whistleblower Hotline is now located directly over a shark tank. The only reason I’m comfortable admitting I’m a dissident in the first place is how unlikely it is that this particular word has made into our president’s vast lexicon. But how long before he starts coming for his social media critics? My best guess is late 2021, which is right when my passport expires. Running rings around you logically. But to drift naziward, mustn’t we gather piles of snowflakes? Waterboarding doesn’t scare me, but being locked in a room with a bunch of republicans …yikes.

If I had my way, the next liberal imperial presidency would maximize this current democratic wreckage for the powers of good. Fascism with a clue? I know it’s a dark road, but I didn’t bring us here, in fact, I’ve been ‘the sky is falling’ guy. Check my latest plug for a more Integral Superlib. Yes, a satirical Ubermensch represents our last best hope—a fella who can’t figure out how to add umlauts to WordPress.

My slogan? Putting the ‘diss’ back into dystopia. Now that fits on a button. Under a Zano Administration, if it’s discovered you’re a republican sympathizer, the secret service will not only escort you across the South Lawn but all the way to the South Pole. Don’t worry, it’s warmer there now due to natural earthly cycles and Jesus. See …he is on your side.

Oh, and another decree: before any conservative family brings children into this ecological and ideological shitshow, I will subject them to my mandatory documentaries: Why Gaia doesn’t need your little shit running around, How much it costs to spawn when you prefer $ anyway, and, my favorite, Even if Jesus could rapture your ass, he’s going with The Crapture for this planet (Plan #2). AOC is set to narrate this last one and the CGI is going to be extra shitty.

Ending press briefings isn’t as large an affront to normalcy as one might think, as Trump had already turned them into a mockery. Whether he lies on twitter or from a press secretary’s podium, it’s all garbage in, garbage out. I prefer this more open fascism. It’s kind of refreshing. From here Naziville is an easy goosestep away. I’ve been practicing the silly walk. Heil Ass-clown Hitler! On The Donald’s campaign trail I thought the clown part might save us from the Hitler part. I.Was.Wrong.

Sure a democratic president in 2020 is farfetched, as for the rolling shitshow that is the DNC, again, I gave up five minutes into the first Democratic debate, here. So, no, you won’t be getting free tuition or healthcare, but there is a free prison doctor and a library for those on who want to reread Art of the Deal. Oh, and on-campus housing is now mandatory. As I move to post, we find the Dem presidential hopefuls refusing to disclose their medical records; they’re finally taking their first wobbly goosesteps towards this brave new welt. Fun to watch!

Meanwhile, if at some point Roger Stone is pardoned, El Presidente could face political conspiracy charges once out of office, which is a moot point if you’re not planning to leave office. I wonder if that was Putin’s pep talk to Trump in Helsinki. Komrade, I am leaving office in a box and you can too! But, wait, there’s Moore. Yeah, you should arrest his fat ass too.

So I will ask again, why didn’t Mueller interview that Helsinki translator? Today, we find all the president’s men coming for Mueller’s team, one by one, which marks another of my predictions coming to screwition. All the president’s goons are using the Deep State conspiracy theories to gut the intelligence agencies and fill them with toadies. My favorite from today, Devin Nunes: Mueller prosecutors should face criminal charges over Russia ‘dirt’ tipster. It’s always a guy who should be in jail accusing someone else of wrongdoing.

Mueller had Trump in his sights and dead to rights, but he decided treason was not “in his scope.” Guess what? Now you and your old friends are in his scope, which is akin to …well, picture Sauron collaborating with those people who worked on the Hubble. Good luck with that. Hey, but you may get a free colon screening out the deal. A Russian compromised bear was charging you, Mr. Mueller, and you chose to fire a Nerf dart …at the ceiling. You were a good soldier, Bob, and now you’ll make a good chew-toy.

Some vintage Zano, directly post the Mueller Report debut [Catch and release joke …oh, you get the idea]:

“Mueller will now face Spygate and his former department will be deconstructed brick by brick, regardless of the merits of the inquisition. He deserves to watch. Not being clear was a fatal error, not just for his investigation, but for our country as a whole.”

“There are still some resistors, but Mueller had his shot at the Death Star and decided to go all Rogue None.”

I wonder what Mueller thinks now …oh, right, who cares?

Ignoring foreign interference in our elections should trigger Trump’s removal under the 25th Amendment, presuming we still have a functioning republic. Since that won’t happen, 2020 will shake out like this: 1. Trump wins the presidency with unfettered foreign interference, or 2. Trump loses but doesn’t accept the results. Democracy breaks down from there, either way. Kidding, our republic is  …well, it reminds me of a certain Eagles’ song.

You should listen to Peaceful Easy Feeling, and Get Over It.

How did we get here, you ask? Here’s our three most weaponized DOJ’s in modern history:

See a pattern yet, besides Eagles songs? It’s really tough to rank these, as in some ways they’re all equally egregious. It’s a sad state of affairs when a Department of Justice that cosigns war crimes barely makes the medal round. Of course, Republicans would counter by saying, LIES! LIES!!, what about Obama’s AGs, Holder and Rice? Sorry, it has to be true to be published in this rag. My old Holder V Gonzales article, here.

Depressed yet? You should be. Even if a D administration does become a thing again someday, it will likely not decisively vanquish and adjudicate evil, nor will it truly restore the norms associated with the executive branch. Obama didn’t. Think about the way Obama treated his predecessor, a war criminal, vs the way Trump treated the public servant and Benghazi survivor who he defeated. Fuxtaposition? Being nice hasn’t gotten us anywhere and, to add insult to perjury, after the next liberal challenger is beaten by Russian bots he or she will probably be locked up for some Hannity-hatched fictional wet dream, and our new and ‘improved’ DOJ will be only too happy to throw away the key.

On a good note, if we do somehow manage to land another D president, R tends to commit actual crimes, so if we go after them in a similar witch huntery manner, such trials will not end like: McCabe, Comey, the Clintons, the Obama, the Bidens, Lynch, Holder, Clapper, Brenner, et al, they will end with actual jail time for legitimate wrongdoing. If you can’t beat ’em, adjudicate ’em.

“The last of your man-child’s keepers are pulling an Elvis. What happens when General Kelly leaves? Hint: Trump gets to break what he wants, unimpeded. Do you even understand the threat? Of course not, you’re a Republican, so by definition, you don’t understand anything.” —3/2018  Zano

I get to repeat myself, loud and often, but I will honor any requests from my republican counterparts to delete their garbage posts from our server. I will even use BleachBit and try pinning the blame on the Bidens and/or Ukraine.

I’ll leave you with Andrew Sullivan talking Trump over at The Intelligencer:

“This is a cult. It’s sustained by constant fanatical rallies, buoyed by a campaign of deliberate falsehoods, and thriving in an alternate reality created by a media company’s propaganda.”

I’m sure there’s a similar quote of mine on this site, or several hundred, as this has been my main premise for over 15 years. And, yes, I Can’t Tell You Why, but This Is The End Of The Innocence!

Um, that last one is technically a Don Henley song, Zano.