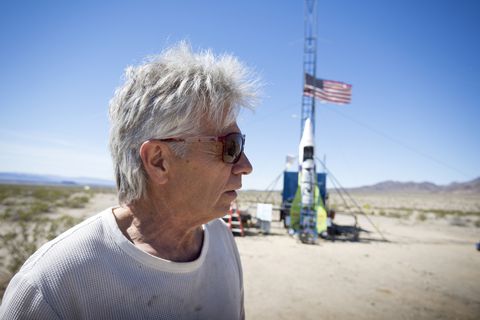 Barstow, CA—‘Mad’ Mike Hughes, hailed as “the world’s deadest daredevil,” literally bit the dust yesterday while attempting to launch himself into the stratosphere on a steam-powered rocket after his parachute and his mind failed to deploy. Stock in Mad Mike Missions, Inc has also plummeted today. This morning his friends and fellow Flat-Earthers decided on a breakfast pancake vigil on the very spot of his return to flatness. Subway donated some of their famous flat-bread and Pistonhead Brewery donated 12 cases of their Flat Tire Amber for the festivities. One attendee said, “This desert gathering is like Burning Man, only with a dozen or so people and pancakes.” A representative of The Darwin Award committee was there to present the daredevil their prestigious award, posthumously. In honor of the daredevil, The Daily Discord will be promoting the conspiracy theory that his death was staged by the late Stanley Kubrick and both are now planning the next 9/11. This publication will also be shifting all of its proceeds for March to the Flat Earth Society, that is, if someone would kindly donate a donate button.

A friend and fellow conspiracy theorist, Jake Watkins, told The Discord, “We are making pancakes for Mike as far as the eye can see, because that’s all we believe is there. Mike has come as close as anyone to proving we live on flat-earth. Prove me wrong. And let’s face it, he did have the wherewithal to hang the flag at halfstaff before launching himself into flat-earther history. Just look at the above picture that The Discord stoled from a proper publication. That’s prescient. He knew when he left this flat earth there was no there, there.”

Mike Hughes once said, “Do I believe the Earth is shaped like a Frisbee? I believe it is. And then one day Wham-O, I both make and am history.”

After the breakfast Pastor Bob said, “We are going to forever call this patch of desert Mad’s Landing and in his own small way Mike made this patch of Earth just a little flatter today. He also apparently took out a very surprised prairie dog. Both will be missed.”

Ironically the prairie dog was as flat as a Wham-O and used during later in the afternoon during an ad hoc ultimate Prarie Dog competition.