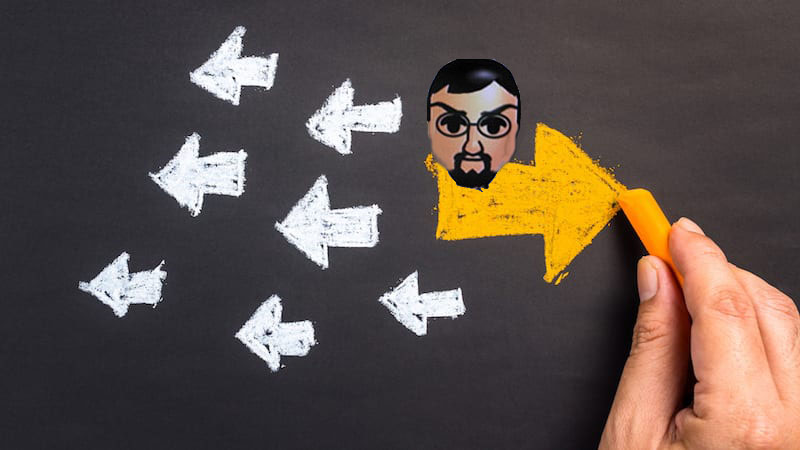 We need comprehensive immigration reform. It’s so bad at our southern border right now that even I wish Trump would appoint a head of Homeland Security. Don’t worry, even though both sides of the aisle can finally agree on the problem, a viable solution is not on the horizon. Certainly some of this surge in migrants is the perception that the U.S. may be on the verge of closing its doors forever …with a wall …equipped with sharks …with friggin’ lasers on their heads. Don’t laugh, that’s the latest executive request that Pelosi is desperately trying to block all funding for. Senior staffers admit that, as a pragmatist, she hates the sharks-in-the-desert thing, but would like to hear more about the lasers-mounted-on-their-heads thing. Mexicans are probably chuckling at Trump’s imaginary wall, but what if Guatemala only gets Fox News? The idea of a thousand mile wall comes with some now-or-never implications. It’s forcing those latitudenally challenged to act now, or risk remaining in their own “shit-hole country” indefinitely. Did Trump’s imaginary wall cause you or a loved one severe emotional distress while attempting to cross the U.S. southern border? Have lasers mounted on sharks injured you or a family member? You may be eligible for a cash reward. That’s it! Let’s cut off their emergency room access and just assign each illegal immigrant a lawyer. Latigation? Amidst this vulture-capitalistic wasteland we now find ourselves, this might be one area we can find some common legal ground.

President Obama was much more thorough on this matter. Shhhhh. He quietly and competently went about the people’s border-security business. Sure there was more work to be done, but unraveling his processes certainly hasn’t helped. Always remember the equation: D = working toward solution and R = working toward making moguls mogulier.

[Additional Mowguli joke abandoned in a jungle to be raised by wolves.]

Today our more liberal friends are using the images of drowned families to highlight Republican cruelty, while Republicans are using the same image to …uh, highlight Republican cruelty. On a positive note, no one can ignore this issue any longer. I can hear my friend now: Where’s your retraction, Zano, because you’ve been ignoring this problem forever?! Wrong. I have agreed with you on several key aspects of this issue over the years: in blog, sonnet, haiku, Photoshop and even knock knock format.

Everyone from Central America.

Just agreeing with this problem is fraught with danger today because, if we climb aboard the Millennial Falcon this will immediately be translated as: You’re a racist, Zano! You’re so close! Realist. The word you were looking for was realist. And I never thought I would say this, but if you keep fucking with Mel Brooks movies, I may get out my fiddle next November and watch this place burn.

Here’s a nugget of wisdom from my dear friend and blogvesary, Pokey McDooris (call me, x0x0):

“What caused the breaking of our immigration system in the first place? I’ve never heard a Democrat (including you) ask or answer that question. I will give you my answer and, please, tell me where I’m wrong. Our immigration system is broken because our government, businesses, and social services have made it relatively easy and profitable for people to come to this country illegally, while simultaneously making it relatively difficult and costly for people to come to this country legally.”

This is a factual statement …from a known Republican. Think about that. Thus my joke right before the last general election: 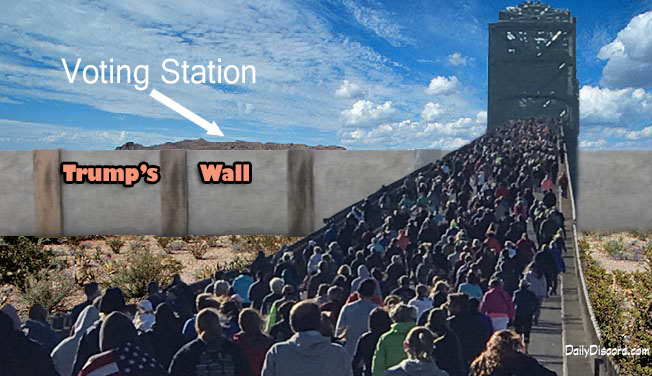 “Dems are afraid of losing some of the minority vote for supporting immigration laws deemed racist and Republicans continually lie about the scope of the problem.”

But what did cause this problem? I measured my research efforts for this one by the length of Gilligan’s Island episodes, and my efforts spanned impressively from The Island Is Sinking episode to the Giant Spider In The Cave episode. This is a non-scientific measurement but both episodes did feature the Professor.

Why are so many people trying to walk from Central America to the United States in the first place? And, no, this is not a Crappalachian Trail/hiking kind of thing. Here’s the secret to finding the answers to all of our earthly problems: just look for the policy that caused, contributed, or exacerbated the situation and then make note of the (R) after the historical politician’s name. It works every time.

This problem started with Teddy Roosevelt (R), when he added his own corollary (adden-dumb) to the Monroe Doctrine, which allowed the U.S. to police any unrest in Latin America. The Rough Piñatas?

“Since Theodore Roosevelt (R) in 1904 declared the U.S.’s right to exercise an ‘international police power’ in Latin America, the U.S. has cut deep wounds throughout the region, leaving scars that will last for generations to come.”

NAFTA was a mixed bag, here, but at least it had some good intentions. Overall it ended tariffs *sigh* and substantially improved the Mexican economy, but it did put a significant faction of Mexican farmers out of business, thus increasing immigration. In 2005 George W. Bush (R) signed CAFTA, a trade agreement between the U.S., Honduras, El Salvador, the Dominican Republic, Costa Rica, Guatemala, and Nicaragua (or, according to a related Trump tweet: Nambia, Agrabah & #SomeOtherShitholeCountries). Anything Republican is not designed to be mixed: it.just.sucks. Wow, how exactly did Dubya find the time to do other shitty things during his administration? Impressive. CAFTA, as it turns out, was a lopsided pile of Republican third-world rapeage and it was a huge contributor to the squalor and the subsequent mass exodus that we find today. Who knew?

For those of you wondering if another Republican president would help or hurt the situation …umm, you’ve obviously missed some prerequisites so go back and read at least seven Zano articles between 2008 and the present @ random. Yes, Trump’s entrance in 2016, which seems like several Vulcan lifetimes ago, has only exacerbated the problem. He cut aid to these regions which has only resulted in an acceleration of the mass exodus.

Another key factor for the mass migration is global warming, which Republicans can contribute to and deny all at the same time. More multitasking? Cause the problem, bitch about the problem, come up with a really inhumane and costly solution to exacerbate the problem and then weaponize it to win elections. It’s like magic! Penn and Teller on Quaaludes during a mass shooting, magic.

[Winslow: sorry, Zano, I put in that Photoshop image request in to the team, but I think they just heard the Quaaludes part. I’ll probably get it in a week or two.]

As a progressive, I realize there are a host of other factors for all the Central American unrest: the promise of a better life in the U.S., the aforementioned Wall-Coming-Soon-Effect (WCSE), drug smuggling, tyrannical-type dictators, and some Rural Inherent Regional Shittyness (RIRS), but whenever an American policy can somehow be linked to a negative issue, it will invariably be Republican in nature. Are there any exceptions? Of course there are. In about fifteen years of blogging I haven’t found any yet, but that doesn’t mean I haven’t stopped looking.

[Retraction: I have stopped looking.]

But, hey, Republicans did identify the crisis at the border, Zano.

Whereas I did not put this in the top ten U.S. problems, I was predicting this schitznik would worsen. This happened rather quickly, even for, me, the Nostradamus of our time. Okay, sorry, that was little over the top …Nostradamus got a lot of shit wrong. But I have always called for comprehensive immigration reform, but admittedly I did not prioritize this as highly as my friend and blogvesary, but it was pretty obvious things would get worse with a warming planet, dwindling resources, and Hulu prices remaining so affordable on this side of the continent (full story here).

Here’s an old Venn diagram summary of mine: 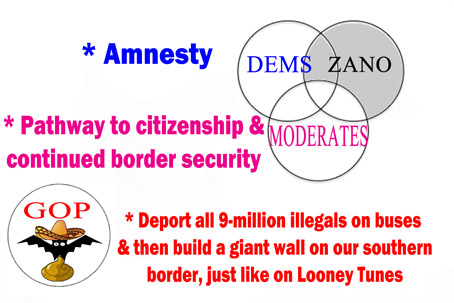 This is still valid. And I love the little bat with the sombrero. Last week Pelosi caved to funding for border security. Why? Because the matter can’t be ignored any longer. Republicans, regardless of the facts on the ground, cling to their initial policies and talking points. They are incapable of processing new data and changing policy accordingly, which is why they’re so dangerous.

And, again, I have always been in favor of better border security, but of the technology-driven variety, not a physical unsightly/ineffective wall. One sign of hope; the House is now proposing the Northern Triangle And Border Stabilization Act. I’ll defer to Sully’s summary of this one:

“It proposes increased U.S. aid to Central American countries, to tackle the problem at its roots; a big investment in border facilities to ensure far more humane treatment of asylum seekers; a much stricter monitoring system to keep track of them after processing to make sure they turn up for their court hearings; many more immigration judges to reduce the massive backlog of cases; and it allows for asylum claims to be made in home countries, rather than at the border.”

The House’s proposal is a good start, which means it will never get beyond Mitch McConnell’s office. So I ask again, how the F do we get rid of these people? But since, on this issue, it really is a dumb and dumber moment. I am not horribly optimistic we can address this issue effectively. Sully believes the Dems are in a bubble on immigration. He’s right. They are paralyzed by the fear of offending their own crazies. Liberalism will die in the wake of abject political correctness and, since they represent our only hope, we can’t let that happen. This problem was rightly identified by my friend long ago. My view has always been, sure, I agree, but let’s deal with the approaching tsunami before we worry about the drink specials ending at the beach bar. Both are valid points, but it’s always been a Maslowian type of hierarchical thing. Hey, let’s compromise, and get one more round of Mai Tais before we seek higher ground.