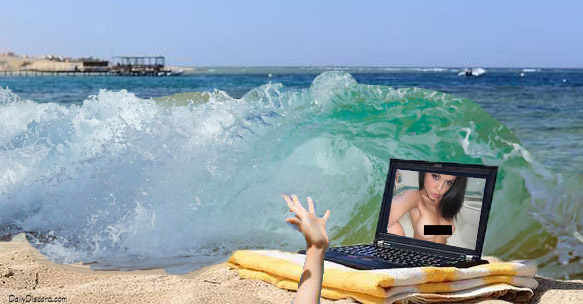 Santa Barbara, CA—What started as an important porn-user download session (PUDS), ended with the destruction of an ASUS laptop and the premature evacuation of one beach goer. Kip Miller, of nearby Montecito, was mortified by the sudden deluge that also claimed the life of his Nintendo 3DS. “When stuff like this happens it makes me question whether or not the universe is fundamentally evil. To quote Bender from Futurama, ‘What is the deal with the ocean?'”

After explaining his plight to local law enforcement officials and threatening legal action against Neptune, the God of the Sea, Mr. Miller is facing indecent exposure charges as well as the distinct possibility of being sacrificed to the Kraken. Miller explains, “I am very disappointed with the actions of the Santa Barbara Police Department, after all, I came to them, so to speak. And if Neptune doesn’t come through with a new laptop and a DS, let’s just say I will piss in the ocean whenever humanly possible.”

Neptune responded this morning in the form of a threatening tweet, “I would summon a brain eating amoeba the next time you enter my domain, but it would likely starve. Ha! #BrainlessPerv.”