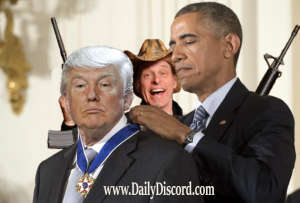 There are two conflicting themes within this Trump/Russia collusion scandal: 1. Liberals across the land are banking on this investigation ending the reign of President Ass-Clown Hitler, and 2. There’s a ton of smoke, yet no functional smoke detectors in the greater DC area. Check out Sam Harris’s podcast wherein Anne Applebaum equates both Putin and Trump’s tactics to “polluting the information space.” The turd is out there? The truth is becoming ever more subjective these days and, if you’re a Republican, this whole truthiness to murkiness shift is paying off. Nonstop lying apparently comes with a super majority. And if you act now you can get two Supreme Court Judges! It is very odd to me how so many Republican folks are disinterested in the whole Trump-should-probably-hang thing. They want us to stop harassing the president and just let Trump govern. What?! Are you crazy? Oh, right. I have an idea, how about the party of Nixon, Dubya and Trump refrain from commenting for a few election cycles? Dope springs eternal.

“It’s easy to release enough information to imply anything without proving anything, that’s what seems to be happening here. This Media and the Democratic Party have lost such credibility. But, if some whistleblowers in the intelligence community are really concerned about the Trump and Russian collusion, then release the smoking gun; otherwise move on. If the smoking gun is released then I’m right there with you, like you should have been when Bill Clinton received half a million dollars for speaking fee in Moscow.”

I think you’re projecting again, Pokey, like after a coke & milk-chugging contest. Just when we were starting to find some common ground …it gets all wet and chunky. The media and the democratic party have lost all credibility, namely, because your side’s bullshit is working.

Seems worse, but the problem is more Adobe than Apokey. Citing Bill Clinton’s speech to Russia is another diversion, or what I call the “we’re even” maneuver. Trump may need to hang, but Bill Clinton might need a slap on the wrist, so let’s call it even. You also suggest we should just “release the smoking gun, or move on.” Don’t you realize there’s no appetite amongst a super majority to investigate a Republican president?

According to The Beast, there are only seven staffers working on the senate’s investigation (all part-time & none with investigative experience). This seems less credible than the recent Kevin Nunes House debacle. Talk about Congressional oversight.

Hey, can you authorize some overtime Mr. President, so we can get to the bottom of the investigation about you?

What is the cherry on this shit sundae? The White House is now refusing to hand over key documents about Michael Flynn’s Russian connections, here. There is a smoking gun, Pokey, but they’re just waiting for it to stop smoking before ditching it in the Potomac. Let the record show, as the rule of law broke down in this nation, the Discord‘s ‘constitutional scholar’ failed to notice. So you’re saying seven Benghazi investigations are fine, but one independent prosecutor assigned to find out whether Trump should hang is pushing it? Are you too busy on the upcoming eighth installment, Battle Beneath the Planet of Benghazi?

Not reaching a level of interest yet? Should we order some more smoke, Poke? Did anyone in Trump’s band of merry memes collude with Russia? It’s a fair question. One that warrants a real answer. Oh, and the FBI has an open investigation on many of these peeps. Before admitting to their Russian connections every one of them had to be caught red-handed (pardon the pun). If you can’t connect these dots, we’re going to need some bigger dots.

Why would you even want Trump to remain in office any longer? Hasn’t the first 100 years been enough? Hey, let’s investigate both!

If Bill Clinton is found guilty of speaking to Russians for money = Uh, well, nothing he did is actually illegal, so not sure.

If Trump is guilty of colluding with Russia to win the election = He can be impeached and then shot by a firing squad.

Deal? We can find some appropriate punishment for Bill, if he’s actually guilty of something. How about ten minutes of community service? Oh, as I’m posting this, CNN just announced that Michael Flynn’s speeches to Russia may not have been legal. Oops.

Let’s say Dubya spoke to Russia and collected some money, or used an unprotected server, or even had some fault in a single embassy attack—which would have been a huge improvement over the dozens he presided over, mind you—I wouldn’t even cover that shit (certainly not endlessly). I tend to focus on those moments when individuals step beyond the usual political shenanigans, like when our president commits war crimes, or lies us into war, or colludes with a foreign power to get elected, or carries out an illegal proxy war with Iran, or breaks into a political opponent’s headquarters …you know, Hannity’s America. I took the liberty of sending you a political scandal identifier kit. Look for it in the mail. It comes with a secret decoder ring! You may want to use it to start decoding stuff.

After forty years of scandals, it comes down to Nixon’s Deep Throat vs Clintons. The rest is semanantics. Sorry.