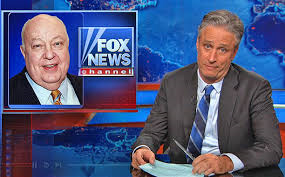 I read your response to Jon Stewart’s departure this week in Slate and it’s telling…it’s telling me move to Canada! It’s another Clue it was Roger Ailes in the Liebrary with the candle schtick. It shouldn’t be news to anyone that you’re the real the culprit here. Speaking of news, you should try some, instead of whatever the hell you’re doing over on Fox. You said Jon Stewart didn’t make a “dent” in your kingdom, but what about your ultimate goal? You desperately want another likeminded sociopath in the White House, or at least some other Rube-io to push your twisted agenda. This is where Stewart and Co. have robbed you of something. You already know this, don’t you?

You did manage to steal the 2000 election, so maybe you think you can just do that again. Oh, and by the way, thanks for that. I really enjoyed that eight year countrywide root canal. Of course, you’ve since convinced your viewers that Obama’s recovery: higher stock market, lower unemployment rate, better housing market and stronger overall economy is somehow worse. You have successfully sold the it could be much better premise—you know, the 21st century Edsel of ideas. Evidence based models…you’re doing it wrong.

If I can get inside your head for a moment, Mr. Ailes, which is likely the same reason folks like Stewart retired early, I think I know what you’re up to. I’m betting that you’re betting on Kasich. Trump will fall and Kasich will rise, but only because you need Ohio. Remember Neil Young, “Four Dems in O-H-I-O. How many more!” Or, the electoral college version of that joke:

I’d like to know what else you have up your sleaze, I mean sleeve, Roger. What will be your Ailestober surprise? My most feared adversary, Marco Rubio, handily won the first debate but his polls didn’t budge. Nice. I’ve been afraid of Rubio all along, but then I stopped to think about it. Why would republicans vote for someone who’s the most formidable candidate? They never get it right, EVER! You’ve lost control of the asylum. Your viewers are so far beyond the pale it would take a cow armed with a laser canyon to get any milk. It’s not going to be Kasich and it’s not going to be Rubio. It’s going to be someone from crazy town.

I believe we are much less likely to see a republican president in 2016, but only because you’ve lost the hearts and minds of the next generation. Jon Stewart had a direct role in this. To your credit, you’ve sparked your base, but your base is shrinking faster than our glaciers. The Stewart’s of the world have robbed you of the future, which is nice because now maybe we can have one.

“How dare those Prius-driving tree huggers try to make money off saving mankind! The nerve!”

As Rand Paul rightly pointed out in the debates, ISIS is driving a billion dollars’ worth of U.S. Hummers. But why should you care? The world itself is your hummer, isn’t it? You’re getting an endless blow job, while the rest of us get it up the ass. No matter how you slice it or spin it, history will not so easily forget Lord Reagan’s role in creating Al-Qaeda and W’s role in creating ISIS. That will likely pale in comparison to the backlash of your position on climate change. Still, you want to blame the victims. Let’s blame the people flooding our borders who are going through hell to get away from hell you’ve created. You want to build a wall?

“There’s one in the spotlight, he doesn’t look right to me, get him up against the wall.”

The only reason I don’t buy into this new world order conspiracy stuff is this: there is a marked difference in the way Democratic presidents have approached our foreign policy, specifically in the Middle East. They have not done near, anywhere near the F-ing damage you chicken hawks have. I believe the environment is beyond help and, thanks to your interventions, so is the Middle East. You have not caused either problem, as I am not an all-or-none thinking, but you have exacerbated them worse than El Chapo at a Trump employee picnic. Republicans invariably make every issue worse. Is there an exception? Am I missing one?

When the day comes that even your own moronic minions can’t deny global warming, it will only highlight the horror of your 2000 election stunt. Kidding, you’ll be too busy covering Hillary Sexted Benghazi! …or some other designed distraction..

You will be damned for your part in our demise, sir, and yet you underestimated even your own abilities. The clueless brigade is beyond your control now. This part of the show will FINALLY be worth watching. Your viewers are actually more ignorant than your politicians, which is so improbable it may yet bend space/time. Higgs Bozo particle?

The last thing on your agenda is to finish off America, but you know this as well. Your followers may be fools but you are not…or are you? Even Murdoch said:

“You know Roger is crazy. He really believes that stuff.”

Yeah, “that stuff”. That stuff you’ve been peddling 24/7. That stuff I couldn’t turn my head from since 9/11…you know, Benghazi. I can’t even compare you two to Bush and Cheney, because one was dumb and the other evil. What are you two? Bonnie and Clyde? Maul and Palpatine? You created the all-or-none thinking world that we now reside. I, like Stewart, would much rather have covered something the hell else. It’s sad when comedy becomes tragedy.

“I only understand friendship or scorched earth.”

Your “friends” are drooling in a corner somewhere. That’s not an age-related condition, it’s an Ailes-created one. The results of your ‘scorched Earth’ is becoming all too apparent.

Jon Stewart probably doesn’t like you, Mr. Ailes, but only because he too is watching the slow moving train wreck of your own creation. We all wish we could avert our eyes and cover something meaningful, but you and your jackass army aren’t going anywhere, so either are we. There’s so many more important things I could be doing, like YouTube planking. It’s been said that no one is smart enough to be wrong all the time, so you must be the High T Lex Luther of our time. You’ve weaponized stupid and good luck with that, sir.

Respectfully submitted, minus that F bomb,