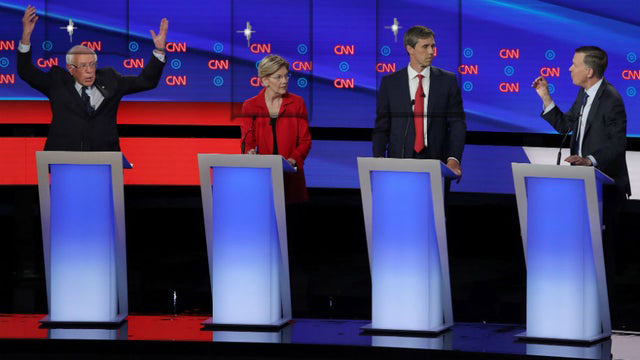 Amidst last night’s edgy debate two clear and separate factions of the Democratic party have emerged. Many feel such heated exchanges are not suitable for all progressives and could emotionally scar viewers and participants alike. Under pressure from the Democratic National Committee, CNN has agreed to alter their format for tonight’s debate to accommodate these concerns. Moving forward if a participant becomes frightened by any mention of a potential segregationist, misogynist, racist, or by someone believed to have seen a Mel Brooks film in a theater, they can take a brief timeout to collect themselves, get some snacks, or even grab a shower. CNN is also working diligently to install real-time ‘cone of silence’ technology that can descend over the heads of those offended in the hopes of blocking out potentially trauma-inducing viewpoints and ideas. Home viewers are encouraged to hover a finger over their volume control or mute buttons.

Trauma counselors will also be available, complete with a taxi-meter type pay system and—

Let me step out of this bit for a moment.

WTF, people?! This was some embarrassing schitznik. The only one who won last night’s debate was Donald Trump. My biggest takeaway? Leave your Fox News talking points at the door. These should never be mentioned unless you wish to make fun of them. There’s only one notable exception and, you guessed it, it’s overt political correctness. There’s a difference between being a moderate Democrat and an idiot. Repeating right-wing propaganda should be a disqualifier for any Democratic presidential hopeful. You are on the wrong side if you think anything the GOP has to say is relevant to a debate in 2019.

Other ideas can be scary, so ask your moderator if a safe space timeout or ‘cone of silence’ feature is right for you!