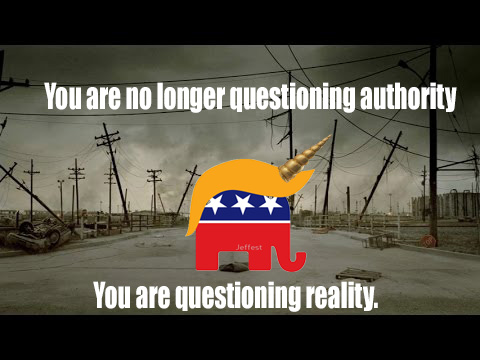 My friend’s denial of GOP incompetence is something for the ages, isn’t it? The Republican false narrative is as constant as the Northern Bar. Bad example; I’m barred. As we anxiously watch this president test the limits of our checks and balances, my friend continues to ignore this in favor of squatting on a mushroom to contemplate his navel. I don’t remember voting for stuff pre-1913, Pokey, but I do remember distinctly not voting for a Republican in my adult lifetime. Although your last history lesson was well-crafted, it doesn’t excuse your voting record. Whereas Republican atrocities are measurable, liberal atrocities remain theoretical. And you’re calling me out for sweeping generalizations? Whereas I link back to studies, data, graphs, and earlier predictions, you keep citing far-right, alt-right, termite, anti-erudite, rustlers, cut throats, murderers, bounty hunters, desperados, mugs, pugs, thugs, nitwits, halfwits, dimwits, vipers, snipers, con men, Indian agents, Mexican bandits, muggers, buggerers, bushwhackers, hornswogglers, horse thieves, bull dykes, train robbers, bank robbers, ass-kickers, shit-kickers and …Methodists!

[Winslow: Thanks, Zano, now The Discord is being sued by the Hedy Lamarr Foundation.]

If you voted for a Republican in the 21st century, I’m not that interested in the theoretical, cultural, philosophical undercurrents that brought you to that catastrophic decision. The more recent carnage of Dubya & Drumpf is a tad more pressing than some ideological abstractions. Let’s have your historical debate once the Republican party is disbanded, or at the very least mitigated. If you want something to counter socialism, this bunch is not it! Why should we focus on these historical footnotes, principled or otherwise, when a personality disorder is currently roaming the White House halls (looking for hamberders and cofeve?). I’m sure there were principled reasons to initially support Hitler too, after all he did bring a small country that was economically bludgeoned by the international community post WWI to the brink of global dominance. I can hear the Sean Hannitys of the day now; I think it was a show called Goebbles’ Deutschland. Gets the old populist blood flowing, eh?

Meanwhile voting for Trump was a vote for a man both the Zanos of the world and our intelligence community identified as a clear and present danger—not to mention several other Harrison Ford movies.

[Temple of Dumb, Expatriat Games, and Hair Force One jokes all removed by the editor.]

I stand by my initial presidential nickname: Ass-clown Hitler. Our only hope has always been this man-child’s immaturity level and ignorance. Neonatezi? Hitler did score slightly better on a recent personality test, but in Trump’s defense it was pretty close. Hyperbole? No. Whereas during my ‘sweeping generalizations’ I cite studies and dudes from Oxford, you consistently cite people who can’t spell Oxford.

Hitler took a broken country and made it the strongest economy in the world.

Trump will take the best economy and the greatest experiment in democracy and [censored].

Yeah, I know I’m comparing Adolfs to Orange-u-tans, but I don’t particularly care about the steps and the route you have chosen to bring our country to ruin; I choose to focus on the ‘ruin’ part. Why do Republicans always choose the darker road? When Dubya botched the Iraq occupation, he asked, “Where are their Washingtons and Jeffersons?” Although it did confirm his ignorance of the region and the crusading inhabitants therein, but that question is relevant today. If you’re right about stuff, Pokey, of which there’s little to no proof, where are your Washingtons and Jeffersons? I can not imagine a scenario today wherein the lesser of two evils would be a Republican president. Their Breitbartward-shift is palpable, complete and, at this point, irreparable.

And you and your ilk will gladly take a large clumsy step toward a strongman to avoid what? France’s healthcare system? Finland’s educational system? Germany’s greener and more powerful economy? A climate apocalypse? Are you afraid to travel to those places because of the totalitarian regimes who run those death camps?

Your political party is designed as a distraction, nothing more. Latest example, immigration reform: 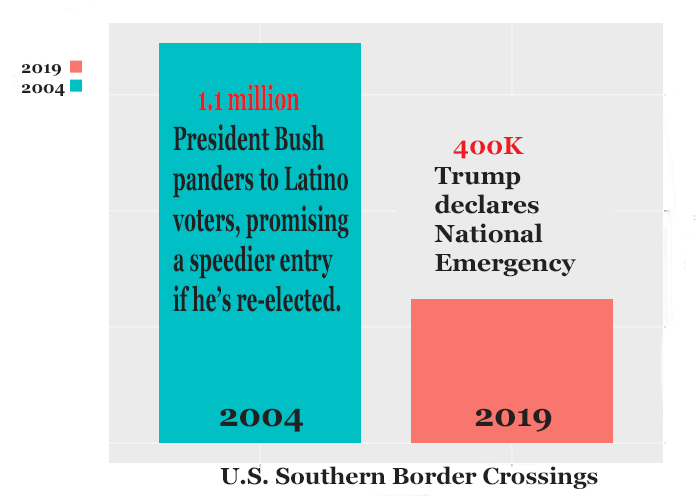 This is real data that summarizes a real fake national emergency. We shouldn’t be talking about wall versus fence, we should be talking about just mass extinction, or one that includes humans. As a self-proclaimed constitutionalist, why do you always miss the main takeaways? Even if we just look at our founding documents, you’re still screwing the pooch on all issues great and small. Your last article focuses on the coveted Bill of Rights, yet you were silent when it was completely gutted after 9/11—to the point where American citizens were picked up off the street without due process and tortured, some to the point of mental illness. You have this selective enforcement thing where you only get your dandruff up if someone is trying to do something helpful for the low or middle classes. Your ilk is brainwashed to be wary of all things helpful or relevant.

We have the models that work and those countries lost zero freedoms. At the highest point of disparity in nearly a century, you side with the super rich …on every stinkin’ issue! Coincidence? You certainly think so. To me it’s pretty obvious, in all likelihood our president is compromised, and if not your party certainly is. This theory is backed by key portions of our intelligence community, so of course it’s unconstitutional to turn our attention away from former Secretary of State’s use of a private email server.

You would allow a Mr. Burns to waltz into Springfield and hijack the economy, along with your precious liberties, as long as he promised you a non-unionized job without benefits. Why Burns? He scores really poorly on the: ‘Guy you’d like to have a beer with at Moe’s Tavern’ polling question.

“The flying monkeys are only coming for the bad guys.”

Mr. Burns has a point though, the latest rising progressive star in Springfield is a shaggy Scottish groundskeeper, who is running on subsidizing haggis from his tool shed. Braveheartburn?

Sorry, I have to end by coming full saddle *cough* circle, “Pokey only pawn in game of politics.”