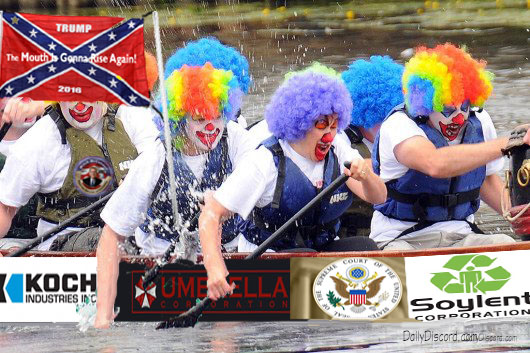 Since day one of this rag’s inception I’ve warned how this is a race between the death of the Republican party and the death of our nation. Unfortunately taking back the House falls short of what the situation demanded. Granted the odds of winning the senate were always grim, but the integrity or our courts are lost for a generation and Fox & Frauds will continue to placate this orange pariah as we race toward ruin. We’ve shot beyond the point of no return on our planet’s viability, on our court’s authoritarianism, and on our overall drift toward fascism. Even our booming economy is showing signs of losing sight of the shoreline as our deficits hit $22-trillion this month while the president guts the last of the Wall Street regulations and consumer protections. Remember what a big deal deficits were when Obama was forced to create a new economic model to avoid the Bush Depression? Now that they’re skyrocketing, for no actual reason, let’s go back to ignoring them. Barring the slim chance of an annulment our judicial system is locked on authoritarian mode. Trust me, ideologically speaking they’ll land somewhere between Federalists and Nazi Federalists. But I’ll let you be the inquisitor. And, to save himself, our president may attempt to become a permanent fixture over on 1600 Pennsylvania Ave. So I have only one more question for you, my friend, how the hell did you miss all of this shit?

[Benghazi joke removed by the editor, placed in a small box, and buried with the hamster in the backyard.]

How can someone paying such close attention get everything so wrong? I know you’re not a Nazi, my friend, but you are a Republican sympathizer. See what I did there? Actually, the damage is done. The GOP is not going to protect the constitution—they will attempt to destroy it, swiftly and completely, and probably sooner than later. Weak constitutions?

You should at least know what you and your ilk actually stand for. Hillary called them “deplorables”, but at their heart they’re fascists. I diagnosed the entire GOP with a personality disorder, long ago. And what we don’t need right now is the whole there’s more that unites us than divides us crap. If Republicans want to fund it, I don’t; if Republicans think it’s important, it isn’t. Let’s stop downplaying their atrocities. I call “bullshit”. No more mincing words. Let’s leave that to our president. Lexi-con man?

Here’s what we as a nation can no longer ignore:

Siphoning our collective wealth to a handful of people is evil, especially if one of them is actually named Dr. Evil.

Accelerating a mass extinction and destroying our ecosystem for short term economic gains is evil, especially when the political elephants refuse to die off.

Resuming the burying of the toxin barrels under the little league field is evil, and so is ignoring the quality of our drinking water for our citizenry. Oh black water, keep on rolling?

Letting people die every day in the richest country as we slide to about the worst healthcare system in the free industrialized world is evil (two words: rhymes with single mayor).

Imposing archaic Judaeo-Christian values on our citizenry through gerrymandering, voter suppression and lies is evil. Let’s not forget the recent fruits of the electoral college. The Orange doesn’t fall far from the Bush?

Let’s call Republicanism what it is, evil. There is no link from true Christian values to the GOP. Such connections are lies perpetuated by some Mr. Burnsian hate mogul. For nearly twenty years I’ve been calling for Republican reform, but we’re waaaay past that shit. Now the GOP needs to burn. Greed and stupidity are not qualities, and fascism, no matter how inept, is not a virtue.

What exactly have you been rambling on about, Pokey, on the lead up to the demise of our ecosystem, our economy, and our republic? Abortion numbers dropping like a rock …but not fast enough! Illegal border crossings way down …but not fast enough! And your last article means what, exactly? Not enough brown people are buying Rosetta Stone? And the rest of your hoopla falls into two main categories: the active suppression of liberal votes, or attempts to legislate religious morality through bigotry.

Great record, speaking of which I hope your president has one soon.

Liberals have conducted only two “major” investigations in my lifetime—which is a tragedy in-and-of itself—and they’ve already netted over 60 indictments (even before the conclusion of the second investigation!). That number will grow despite the new goon in the AG’s office. And what do you have to show for all of your senseless inquiries over the years?

Strong work. How about the next time you folks think about investigating something, just swallow. I have asked you time and time again to see the bigger patterns, but you remain fixated on the contrived and meaningless details. The caravan was another ruse that served its purpose. Stop falling for this shit! When you run and try to kick that ball, Lucy is going to pull it away, again, just like she has for every news cycle for the last two decades.

Europe is seeing the 1930s themes rise again, even if you aren’t, and Trump is being repudiated wherever he shows his orange face outside of Oklahoma. But, hey, I’m not throwing rocks at Tucker Carlson’s house, yet, nor am I condoning such actions, yet. But I may need to get my rocks off soon. Your party is walking a very very fine line …all bets are off if your ilk takes one more goose-step toward freedumb.

So I should wait to speak the truth until after the Mueller report is buried? Or the next unnecessary war is waged for perceived political or economic gains? Or the senseless and ineffectual war on drugs enters a more authoritarian/militarized stage? Or Marshall Law is declared for some Wag the Dog scenario? Or until the Trump family rules indefinitely? What if you were in Germany at the onset of evil and you didn’t speak out in time? Tell you what, I’ll hold with tradition of speaking to future events and you can continue your endless misinterpretation streak (EMS).

Sorry, my friend, you’ve had plenty of time to renounce your party. Granted, I’m truly sorry for the tone of this exchange but I will no longer sugarcoat evil. You are and will always be a dear friend, but you and your ilk’s profound shortsightedness is robbing our daughters of their future, period. I just can’t stress enough how disappointing it is to see where we are heading after covering this schitznik for decades.

The findings of the Mueller report, whether released or buried, could tear the last of our republic apart. Sure we’ve cornered the animal, but having a fascist at the helm demanded a blue tsunami on November 6th, not a Smurf spoogelet. Hell, Clinton and Obama lost more seats during their first midterms. The mountain our Republican friends have created for liberals is steep, but is it too steep to call this a viable democracy? I don’t think we’re there yet …yet.

Zano Nation unite, form of, eleven people! Kidding, we lost someone recently, but, hey, we haven’t dropped into single digits …yet.