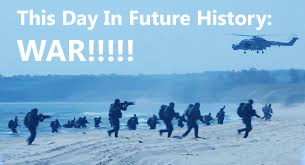 Brussels, BE—Ironically, Italy, the last NATO country to successfully budget 2% of its overall GDP to defense spending, has done so ahead of the expected 2020 deadline. Instead of cheers from The Trump House, the timing could not be worse. Super Supreme Leader Donald Trump is scrambling as the EU, Australia and Canada, currently known as the Coalition of the Cognizant, just declared war on the United States of The Donald. As rockets are launched ahead of an imminent land invasion, Trump addressed the nation via a historic tweet from his bunker deep in the Earth’s crust. “There is nothing to fear but fear itself, and those rockets, of course. Wow, there’s a lot of them!! We shall fight them on the beaches, we will defend my land and business empire, whatever your cost may be. How many characters left? Crap. #NeverSurrender!”

Defense Secretary John Bolton announced to the nation today that he is not having any more blood flow problems and how he is “erect as shit today.” He has ordered a full and immediate military response that will go down in history as “really helping me with my erectile dysfunction.”

German Chancellor Angela Merkel said she has no regrets regarding the pending demise of planet Earth, “I would rather share a meal with Bashir al Assad while being chemically attacked than meet with the current president of the United States. We are supposed to host him hear in Germany next month, which really pushed me toward the whole we-might-as-well-blow-everything-to-hell thing.”