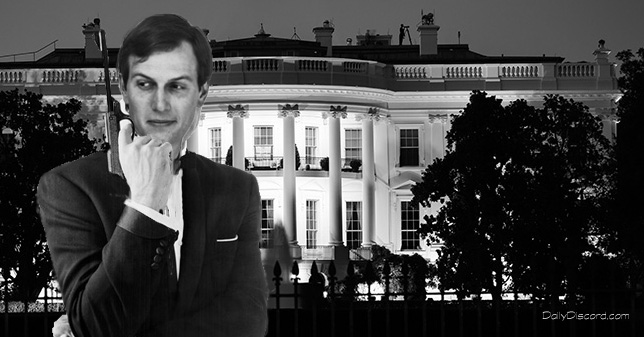 Washington, DC—Jared Kushner, the president’s senior son-in-law, is believed to have obtained double O something-or-another security status. The White House is denying his clearance has even been downgraded. Mr. Kushner told the press today, “My level changed is all, so my clearance could be higher, or lower. It’s on a need-to-know basis and you don’t need to know. My security may have shifted to ‘Ultra’, ‘Platinum Secret’ or maybe even ‘Unleaded’. But if I told you I would have to kill you. There’s your only hint about my clearance level. Yeah, bitches, that’s what I’m talking about …or, in this case, not talking about.”

White House Chief of Staff, John Kelly, ultimately made the decision to “change” Kushner’s security status. Kelly told the press today, “I can’t go into details about his interim security changes. He does have some overdue books checked out from the Library of Congress, but, hey, at least one of them is reading, right?”

Kushner later added, “Having an interim security clearance means I have a license to kill, intermittently, without provocation. Oh, and I like my martinis shaken-up, like the White House staff.”

There is mounting evidence of Mr. Kushner’s financial entanglements and how foreign governments attempted to groom him on the lead up to the 2016 election. An image has since surfaced of the Trumps picking nits off each other like monkeys, or, in this case, orangutans. Mickey Dolenz later commented, “Kushner’s charges are nit picky, at best.”