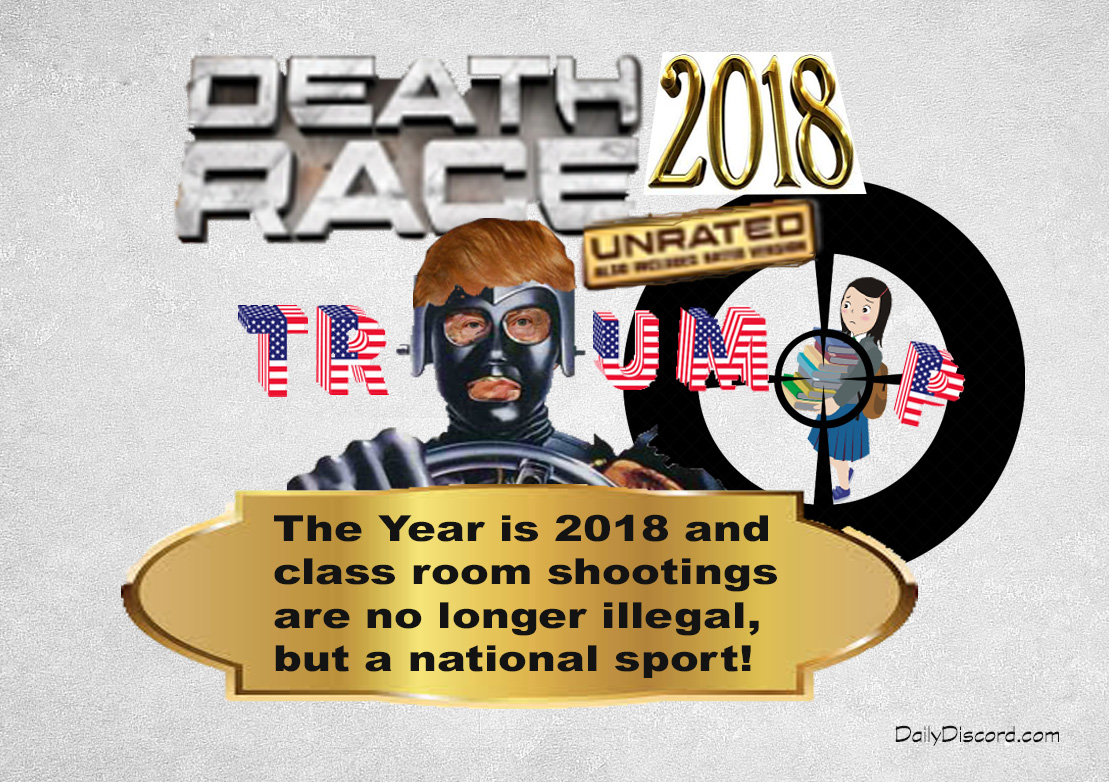 Tweet Tower—President Donald Trump is responding to the massive outcry to the recent Florida school shooting with a novel idea. Yes! He wants to write a book about it! Once he learns to read, of course. His other idea involves giving bonuses to armed teachers. Additional cash can be earned for both type of weapon as well as confirmed on-campus kill shots. There’s the potential for extra vacation time for 2nd Amendmenting any member of a minority, and double points will be rewarded for those also registered as a Democrat. With this small tweak to our nation’s educational system, The Donald hopes to enrich the lives of those involved with one of our most crucial occupations. He’s talking about the NRA’s executive management, of course.

The President told the press today, “Do you remember the movie Death Race 2000? That was a great movie, and that is the idea behind this new idea, which is good idea, because it’s my idea. We can use my idea in our schools. We can. I am a firm believer in our 2nd Amendment rights. The right to bear arms comes directly to us from bears… Fine, I wasn’t listening to that gun guy’s whole speech today, but it was powerful. Just as powerful as the shit our teachers will be packing next fall. We need the four Rs back in our schools, uh, reading, rifles, republicans, uh, Russia …no, not Russia, not Russia. Restitution! That’s the ticket.”

Secretary of Education, Betsy Devos, said, “This coming fall we will be rolling out our new Packing For School initiative. We haven’t finalized that yet, we might go with Watch Your Back To School. This will shift the focus and the curriculum to some more practical life lessons, like ducking, hiding, and running really fast. We want the best kids to graduate high school, right? And once we get this program off the ground, only the brightest kids will still be alive to attend college. Don’t worry, this will not in any way impact my other educational program, No Child’s Behind Left, because that just has a nice sting to it …ring to it.”