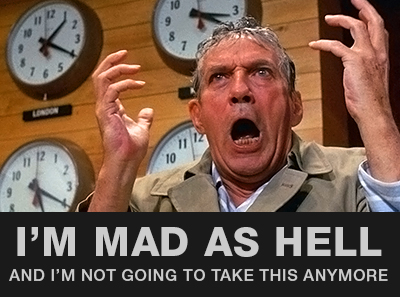 There’s still no shortage of election blame, not to mention tons of players, factors and conspiracy theories abound. Who’s fault is it? We have fake news, real news, voter turnout, voter suppression, Comey, Putin, Bernie, Weiner, and even Weiner’s weiner played its part. The perfect reality show. In the end, what matters is this: a Trump presidency is unacceptable to those of us with a Clue. Colonel Mustard in the Pentagon with the Dementia? OK, how about Putin in the Observatory with the computer hacker? You say you want a revolution? Occupy virtual space? Our Constitution and our way of life are taking a shit, so why are we so preoccupied with civility? Let’s all stay calm, cool and collective until the next Civil War? Sounds reasonable. Let’s be clear, staying reasonable is the problem. Step one, the Civility War.

Since the election the blogesphere has been awash with suggestions that I lighten up, watch my language, and be mindful of people’s feelings. Really? If my predictions come to pass, I don’t know if sensitivity is warranted. So the one time I play the insensitivity card, I get blowback …from Republicans? So you folks are allowed to be loud and wrong about every topic on Earth, but I can’t be slightly miffed when you hand the nuclear codes to a man of questionable character, uneven temperament, and “unpresidented” ignorance? If Trump is half as bad as I am guessing, this isn’t liberal whining, it’s insightful venting. Still confused? Here’s the difference:

Republican Whining: What bathroom do I use? There’s so many weirdos around! Growth this quarter is only 2.9%, yuck!

See the difference? They don’t. Liberal whining is based on ecosystem or economic collapses. Do you really think things are going to just settle back down and return to normal? Of course you do, you’re Republicans (See: prognostication skills of free falling mole).

Most folks on both sides want to settle things back down, so call me a pariah. Even Stewart and Maher are on the unity comedy bandwagon. Diane Rehm’s last plea over on NPR was similar, “Don’t stop talking to each other.” What’s the point of arguing with people who bring their own facts? Jon Stewart is scorning negative attacks and any “name calling.” I must admit my post election FB threads ended up looking like Sherman’s march to the sea (miles and miles of scorched virtual Earth). One funny moment, my friend Dagny posted that Chris Christie and Sarah Palin were being considered for cabinet positions. Keeping to my Arkham Asylum theme, I joked: damn, I was holding out for the Penguin or Mr. Freeze. She responded, Uh, I love you, Mick, but shouldn’t you be minding your own store? Yikes! Was she ever right. 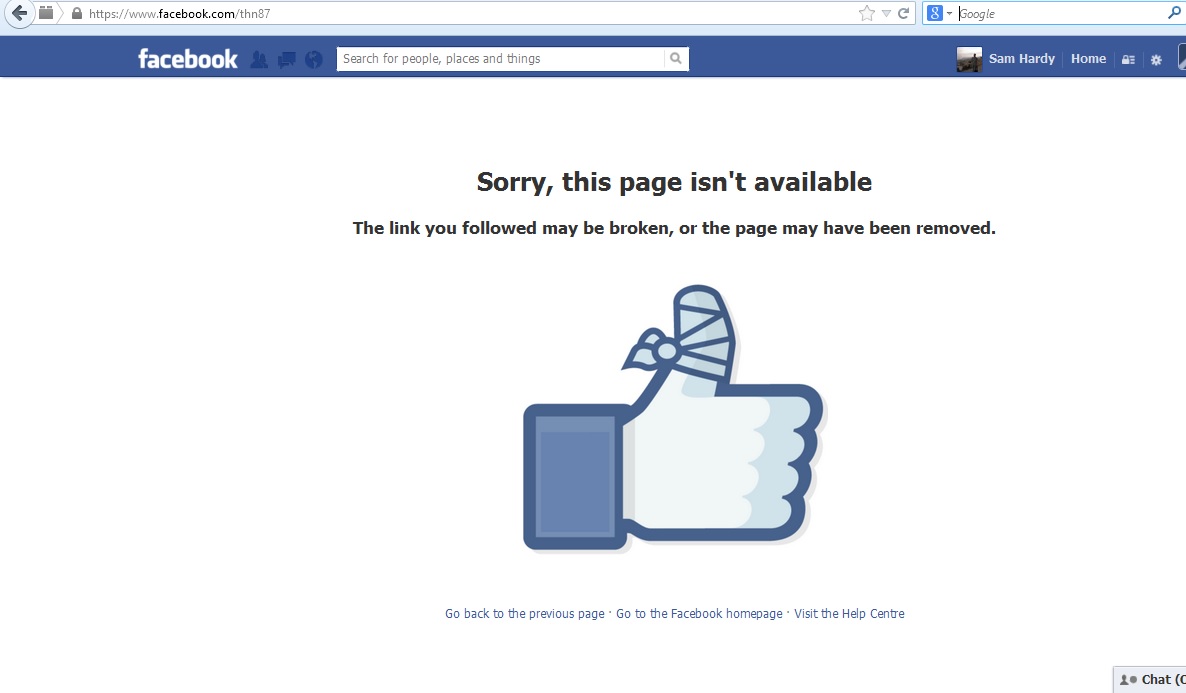 Recently Fake News guru Paul Horner was attacked on Anderson Cooper. Anderson asked, “Why even do this?” I would have replied, why don’t you do this well, Anderson? Why worry about what I’m doing with my free time? MSNBC is now Fox-left, so CNN was in a unique position to become the authority, at least on cable, and call out the bullshit whenever it surfaced. They chose not to in the guise of unbiasedness. They became MCs and allowed this vacuum gap to subsume our political reality.

Similarly, NPR’s The World had alt-right’s Richard Spencer as a guest. He refused to apologize for using belittling or demeaning language. They focused on his use of the word cuck. I actually agree with this cuck. Why play nice at this point? His example was how W got a 100,000 or more people killed by lying us into war. He asked, how do we react to something like that civilly?

“Uh, please don’t be misleading next time with the most powerful army on Earth and give lots of people boo boos.”

The host, Marco Werman, responded to Spencer’s defense of demeaning language thusly: “So he’s saying, why can’t we all not get along? Wow. Incredible.”

We don’t get along, Marco, and people like you are part of the problem. What’s “incredible” is how we had countless investigations on Benghazi, yet none on Comey, or the Russian election hacks, or even the lead up the Iraq War. So we’re supposed to stand up to tyranny politely? Please don’t load my friend onto that train to Trumpschwitz. He does my lawn. Screw that. Our ecosystem and our Constitution are being gutted like a mercury-laden fish. Don’t knock some of us for being a little savvier than you supposed “real” journalists. As Burke said, “All that is necessary for the triumph of evil is that good men do nothing.” Let the record show, you real media assholes cared more about ratings and politeness than our collective future. Oops, name calling again. Ok, how about, you terminal ends of the alimentary canal? Fine, I’ll work on that one.

Let’s play nice? Let’s give President Ass-clown Hitler a chance? Let’s blame fake news? Our President-elect actually believes fake news, so everything else pales in comparison. Whiter shade of white? You play nice, but I’m sticking Trump on the back of the friggin’ Loch Ness monster, right now! 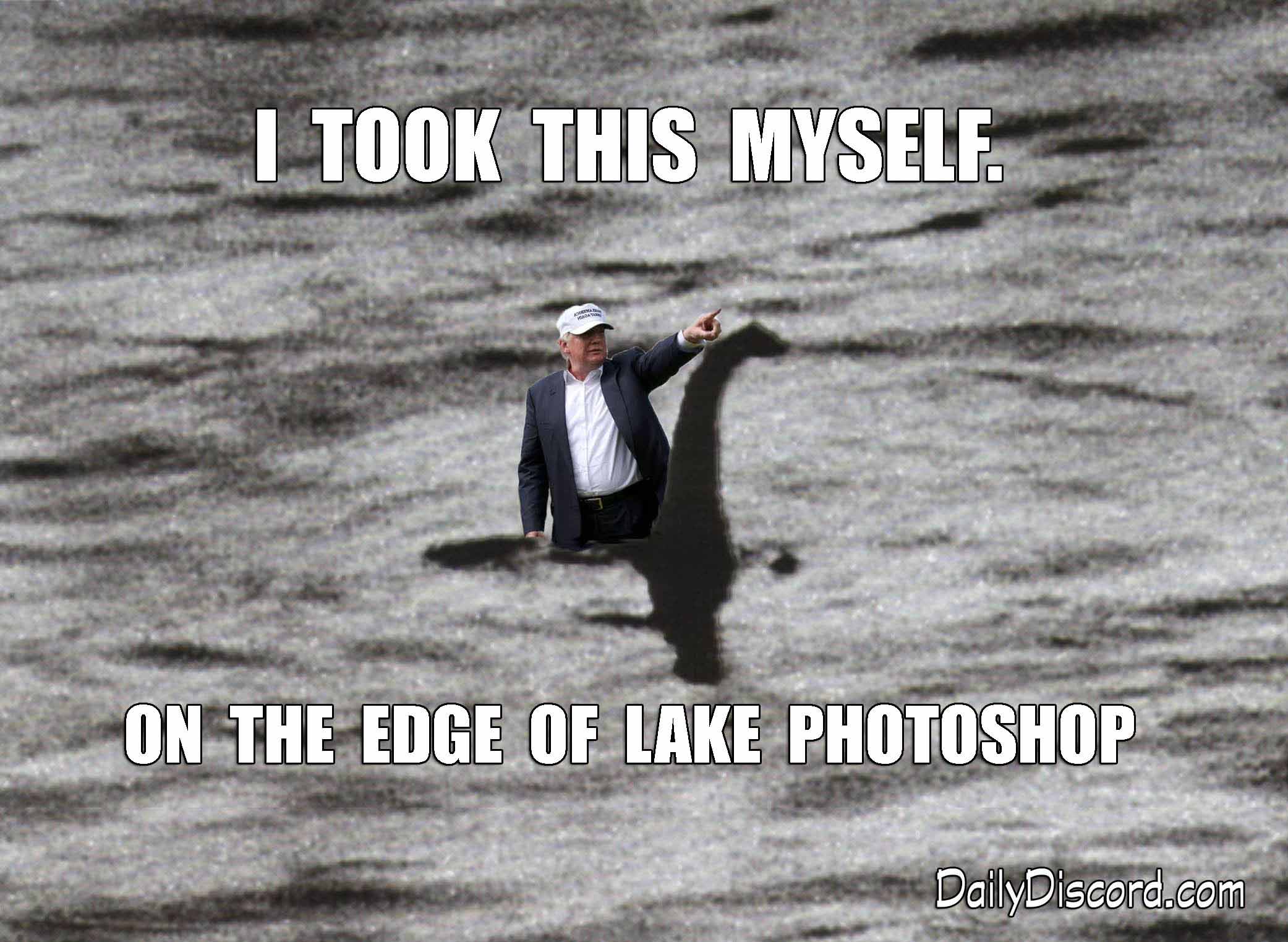 You think this is real? I don’t think you’re for real CNN or NPR. In the guise of balance, you allowed reality to by hijacked by morons. Make no mistake, this happened on your watch. And you allowed this to happen out of a fear of being called politically incorrect. I have always agreed with Republicans on this point and it’s ironic that it allowed them to invent an alternate politically reality.

Will you be at the coronation of Ass-Clown Hitler, Anderson? If you are, you’d better be nice to him. No really, he’s a monster. So I refuse to apologize for getting my panties in a bunch in this post-truth, post-political, post-accountability world. I will, however, demand an apology from you folks when everything goes to hell in a small-hands-basket.