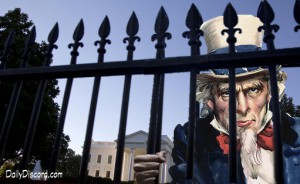 Statism is the common feature all systems of Tyrannical Powers of Centralized Control whether they be fascist communist or social dictatorship. It is also the economic regulation of private industry by the state. Mick Zano has done us the great favor of outlining his eight-point plan for implementing a state system of centralized control. Stop pointing to Trump as the villain, Zano, and try looking in a mirror.

Step 1): Overthrow any democratically elected opposition to the aspiring Tyrannical Powers. This can best be achieved by infiltrating various parts of the military, judicial, and intelligence agencies exploit their bureaucratic positions to frame the “leader” by orchestrating a narrative that justifies the legitimacy of your coup.

Step 2): Destroy any political opposition to your centralized control of power. Its helpful to use your media outlets to constantly characterize all of your political adversaries as “racists,” “rapists,” or “fascists.” If you repeat this process long enough, the names will stick and the general population will ignore their policy suggestions and look forward to your destruction of these people.

Step 3): Create an alarmist narrative that guarantees cataclysmic destruction UNLESS people grant your Tyrannical Powers of Centralized Control the right to regulate all of the energy industry.

Step 4): Offer people free health care if they allow your Tyrannical Powers of Centralized Control to regulate all aspect of healthcare, medicine, and insurance (25% of American economy).

Step 5): Offer people, including illegal aliens (I mean undocumented immigrants), access to the public treasury (i.e.. the rich white men) to pay for their food, housing, healthcare, and education. Create a needy population who will never have the means of standing independent of your “help.” Then you can be assured that they will never bite the hand that feeds them.

Step 6): Fund genetic research that works to engineer a clone of Michael Jackson so that that the Jackson Five’s entertaining performance can distract people from the utter misery and futility of their lives. While we’re at it–genetically engineer a clone of Andrew Jackson to help the Democratic Party create reservations for rich white Republicans.

Step 8): Bring back the gang of eight to pass lip service security while creating a pathway to citizenship for all of the illegal aliens (I mean undocumented voters) who are now dependent upon our welfare programs and eager to give complete support to your Tyrannical Powers of Centralized Control.