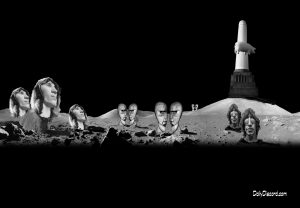 Dark Side of the Moon—A Chinese rover has sent back the first images from the dark side of the moon and they are, well, pretty much what rock & roll fans all expected. The mission has proven, once and for all, there is Waters on the dark side of the moon. Yesterday, at 10:26 a.m. Beijing time, the Chinese spacecraft Chang’e 4 landed in an area on the lunar surface somewhere between the Sea of Tranquility and the hood  The Chinese probe then deployed a rover that soon sent back the first images along with an eerie, tangential message, “Set the controls for the heart of the sun. Interstellar overdrive one of these days, Pigs! … Is there anybody out there? Mother? Nobody home? Wish you were here, Animals. There is no dark side of the moon really. Matter of fact it’s all dark…”

President Trump called to congratulate the Chinese President today on the successfully mission: “Good job being second to the moon, losers. Hillary was second too, ya know,” said President Trump. “Why would you want to go to the dark side of the moon anyway? They don’t even have electricity yet. We, in America, are already planning to go to Mars, to find Matt Damon or something. Ben Affleck has been all depressed without him. Hey, you guys have a big wall, right? How did you get he Mongolians to pay for it? Pink Floyd had a wall. Do you think they got Led Zeppelin to pay for it?”