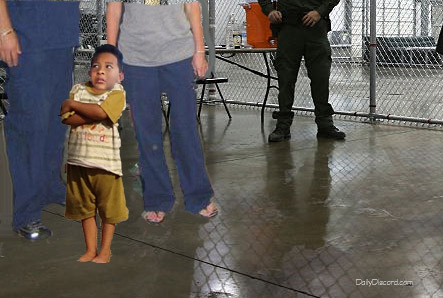 Tweet Tower—Several hundred children remain missing at this hour since the DOJ’s controversial border policy went into effect in May that separates children from those individuals attempting to cross into the U.S. illegally. Reuniting the children with their families since Trump’s recent policy reversal has proven difficult, however, as record keeping is “no longer a thing” in the Age of Trump. The White House has announced a proposed plan promising those detained at the border will receive a voucher allowing them to be reunited with the same number of children that they arrived with. The U.S. Customs and Border Agency will explain to each parent that the child may well be their own, but it is statistically unlikely.

The president is laying the blame for this recent debacle on a fictional African terrorist group from a fictional African country. President Trump said, “I believe those kids were taken by that evil bunch from Nambia called Procol Harum. They took all those Nambian kids right out of their shit-hole school, remember that? And now, because Obama turned a blind eye to the country where he was born, Procol Harum is operating within our own country. I love their song Whiter Shade of Pale, but they shouldn’t have taken those kids. Very bad people! Very bad!!”

Sarah Sanders told the press today, “President Trump said the terrorist group Boko Haram is now operating within the U.S. borders, because recent intelligence suggests they have expanded their Nigerian operations to this country, not Nambian. That’s what I heard the president say. Maybe you folks need to take off your ‘fake news’ filters and start listening more carefully when our president speaks. No, really, it’s going to become mandatory soon.”