Tweet Tower—In the face of a looming government shutdown and mounting criticism from home and abroad, President Trump has retreated to his safe-space to engorge himself with some of the tastiest desserts in the American southeast. Sarah Huckabee-Sanders told the press today, “The president is heading back to Mar-a-Lago as he feels he does his best thinking while digesting.” After results from his physical, the president is apparently inspired to really step-up his caloric intake. Sanders also said, “Since his habits are keeping him so exceptionally happy and healthy, the president is considering doubling his portions at meals and cramming things down his throat with little to no chewing #InhaleToTheChief.”

Critics are calling the ill-timed trip to his resort “disconnected” and “F-d up”, but the president responded earlier today with a presidential tweet: 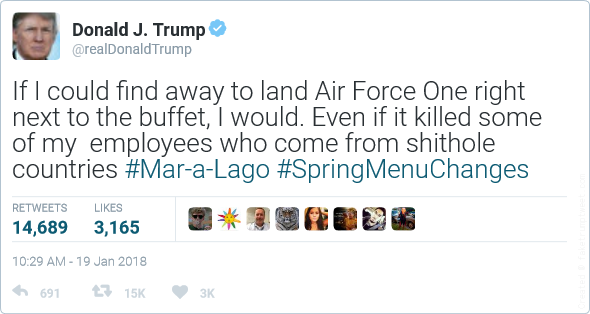 On the issue of North Korea, the president said, “Hey, little Rocket Man, one item from my new spring menu at Mar-a-Lago beats anything in your whole shithole country.” Defense Secretary General James Mattis supported the president’s statements today and added that any attempts at hacking into the Mar-a-Lago private server to obtain any of the recipes, dessert or otherwise, would be considered an act of war.