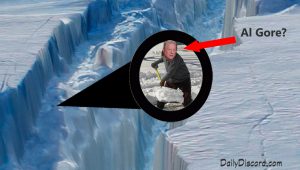 Antarctica—Many believe this blurry, badly photoshopped image of former Vice President Al Gore is genuine. He appears to be digging along the edge of a giant fissure currently forming across an ice shelf in Antarctica. The picture, taken by military aircraft, has many asking: is Al Gore the cause of this fissure or is he simply trying to accelerate the impact of climate change for monetary gain? Mr. Gore is not returning our calls, which only lends credence to our theory that he’s way out on the eastern side of the Antarctic Peninsula where cell service is notoriously sketchy.

Donald Trump has already tweeted, “What did the former Vice President shovel and when did he shovel it?” Others are already calling the affair shovel-gate.

Mr. Gore insist he was just taking ice core samples to further monitor the increase in CO2 levels in the atmosphere over time.  “In no way was I trying to break up Antarctica,” said Mr. Gore. “Glacial calving happens naturally and incrementally over time. It tends to occur when two large chunks of ice have irreconcilable differences and one decides to venture out to see other parts of the ocean.”

When asked about rumors that he’s working on a sequel to An Inconvienent Truth, Mr. Gore said, “Fine, you got me. I want to call it Battle Beneath The Planet Of An Inconvenient Truth, but everyone else on the team hates it. If you can come up with another title that captures the essence of my work, I’m open to suggestions. But good luck beating that one.”

When asked if anything good could come from these constantly retreating glaciers, Mr. Gore said, “Well, if we could find a way to direct these icebergs toward convenient stores and beer coolers, there would certainly be some short term benefits during the summer months.”