I think we’ve all tapped into this 21st century despondent malaise, or the Scheissgiest as I like to call it. We’ve lost something and we lose a little more every day—you know, like our shoreline. I kid the deniers. But let’s move away from my usual white lab coat, behavioral/psychological approach to this problem. Zano-rant Conditioning? Instead of zapping those conservative mice and scribbling notes on my clipboard, let’s climb into Mr. Peabody’s Wayback Machine to see how we got here.

Somewhere along the line debates died, knowledge died, and even the music died. The Big GOPer? In the era of 24-hour endless news cycles, everyone only sites the studies that support their beliefs and we can spin data to conform to any existing worldview. The fact today’s GOP still exists, despite a slew of 21st century crotch shots, is a testament to this post-truth reality. A priori blues?

Every country on Earth has its own national myth. Whereas republicans exaggerate the good parts of our history, liberals tend to downplay them. All things being equal, this is a rare instance where I understand the right’s inherent need to exaggerate the good stuff. It benefits us all if we think we’re God’s chosen people and we deserve the mother lode of all the health, wealth and resources on the planet. To them, this country is filled from sea-to-shining sea with good, Fox-fearing folks…but did I mention it’s shining because of the mercury content? It also doesn’t hurt to think everyone else across the globe is going to hell anyway. Six-feet blunder?

I’m not complaining, because it’s the kind of bullshit that has kept me in good java and good ale for most of my adult life and for that I am eternally (burp) grateful. So kudos, mythic warriors! Whereas I agree it’s important to have a mythic-nationalism, we need some balance. Republican’s need to stop cutting out the ‘science’ parts of our science books and liberals need to stop emphasizing only the unsavory bits, aka: slavery, Japanese internment camps and the plight of Native Americans. Of course, the libs approach is less wrong as they are simply choosing to emphasize certain historical facts. The GOP is repressing knowledge outright. Regardless of the topic, republicans insists on donning the dunce cap. Few exceptions to this algorithm exist, if any.

The brainwashing of the left is much subtler, which admittedly can be more insidious. But real world examples of liberal propaganda in our educational system remains anecdotal at best. Whereas Matt Drudge links to every ultra-liberal professor with an anti-American homework assignment, I don’t have to look any further than statewide initiatives, like in Texas, to see what republicans are up to. Tex-Men Origins? They are content to rip scientific realities right out of our children’s brains, like birth control, evolution, and climate change. Bill Nye the Science Lie?

Also, Texas is where most of Pokey’s CAIR (Council on American Islamic Relations) conspiracy theories reside…you know, the same state that recently thought a military exercise meant “Obama is coming for our guns!” An independent investigation on CAIR,

here. Obama met with CAIR twenty plus times so obviously he’s colluding with radical Islam. Actually, he just talks to everyone…sadly, even to republicans. Ultimately the right likes to question history books because they base most of their own historical knowledge on John Wayne movies. True Shit? Smell Dorado? 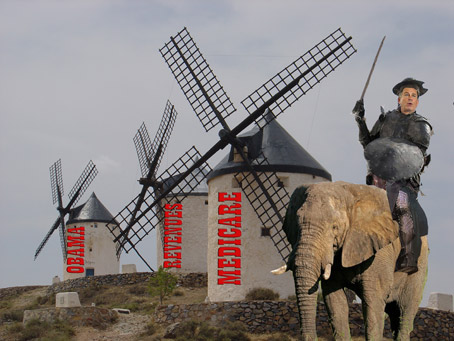 Conservatives are the Don Quixote’s of our time, forever fighting windmills…and solar, and electric and any other sustainable avenue our country might take. They are suspicious of any attempt to shift away from fossil fuels, red meats, big trucks and the rest of their dying paradigm. They seem oblivious to the stranglehold oil companies have on our society and our foreign policy. Republicans have this unflappable sense that they know what’s best for America, but tend to forget their record.

They forever seek that one champion who can encapsulate the essence of their distorted worldview. It reminds me of the waste land theme from the Grail Legend—that lonely quest through the desolation for the one Desired Knight who would return integrity, unity, and glory to the kingdom. Sir Boehnervere? Sir Lies-a-lot? Republicans are more like Dudley Doright, after a traumatic brain injury. Wait, he’s Canadian. Scratch that.

The republican mythos is perpetuated by tactics, not facts. Their way to counter the overall success of marijuana legalization is to run a headline a day: Guy Smoking Pot Smacks Nun, Is Otto the Bus Driver Endangering our Children?, Baby Found Rolling Fatty: This Time Not His Little Brother. Similarly, covering every snow flake that enters the atmosphere says little about the larger trends. The same goes for the Middle East. It’s never occurred to republicans that, for the most part, we’ve tried it their way in the 21st century…and it shows. Joseph Campbell always touted how a country needs a collective myth, but even he knew there just isn’t any one definitive American myth, so in 1996 Fox News stepped in to fill the void—with feces. Void where prohibited? I think Fox represents the beginning of the end for The GOP. Bartlett even said as much on a CNN interview this week:

“They hear the same limited amount of data over and over again, and that’s brain washing.”

Republicans tendency to “self-brain wash” has been one of my main themes here on The Discord. I fear, much like our climate, the right wing of this country has passed the point of no return. Essentially what Rupert Murdoch did was take one part English Tory (religious traditionalism), two parts Whig (free enterprise and that libertarian independence) and three parts Josef Goebbels (propaganda tactics). Rinse, blather, repeat.

They did this to counter what they thought was an out of control leftist media. Fox News was a reaction to the perceived threat from educated elitists. Thanks to Fox and Frauds the republican myth is stronger than the liberal counterpart. Republicans buy into their own brand of bullshit on a whole other level. They are the keepers of the faith and they alone have both Jesus and Jefferson on speed dial. They have done an incredible job creating this ongoing sense that America is the world police and the ultimate moral authority:

“When such a pattern of discourse effectively dominates a government, it is a powerful force constraining political change.” —Myron J. Aronoff

No matter how much contradictory data emerges in the 21st century, nothing penetrates the republican bubble. After two fruitless, mega-expensive wars, our conservative friends are ready to try the same approach on ISIS and Iran, preferably simultaneously. What’s ironic is how these myths of theirs endure. It’s the same with their main economic myth, trickle down. Even as capitalism itself is hitting a brick wall, nothing permeates this wall of non-reality. Wanting to play Monopoly at the beginning of the game is one thing, but to still be enthusiastic when all the real estate is taken and piled high with hotels is quite another. Under the Boardwalk? Yeah, that’s where you’ll find the Ghetto Shaman and me.

The modern republican mythos began with the romanticism of the 50s and early 60s. You know, those precious days right before 3-Days of Peace and Love broke down the door and vomited all over their black & white wingtips. Yes, I owned a pair, but only because I was an 8-year old, dancing fool. Even conservative nostalgia is distorted. The time period they harken back to, post WW-II, was an era marked by one of the most socialistic periods of our history. I lived in a Levitt home on Long Island, built as affordable housing for those returning from the war via government subsidies, aka, white people returning from the war. The government made an unprecedented push to get white folks into their subsidized American dream. The government invested massive amounts in infrastructure and housing across the country, yet this remains the golden years for a GOP capitalism that never existed.

Whereas liberals want to go climb a tree to save the planet, republicans want to get back to a nice segregated community where they can beat their wives and their children with impunity. See, you guys will adjust to Sharia Law—a whole hell of a lot better than the rest of us. Even their understanding of our colonial period is fraught with false assumptions, like Sarah-I’m warning the British!-Palin. The colonies were first settled by Protestants who balked at the religious authorities and instead sought a more personal relationship with God, as David Brooks asserts here. Sure the Christian Mingle bunch was mingled in there, but most of our Founding Fathers preferred pubs over pews. The Sam Adams Doctrine?

As we climb once more into Mr. Peabody’s Wayback Machine, liberals tend to suffer from a retro-retro-romanticism wherein they want to regress to the dark ages in order to save the planet. Operation Amish Picnic? They can’t seem to find anything good from our history at all. They are looking squarely at the results: continued racism, gross inequality, and a planet brought to the brink by industrialization. Ideally liberals want to live in a tree and tell BP to Blowout-Preventer themselves. What, too soon? The problem is they’re launching this bold initiative from the local Starbucks. But republicans, always vying for last place, counter this sentiment with such gems as:

“So what if the oceans are dying?! I don’t know anyone living in the oceans!” —John Q. Republican

Of course they ignore the obvious, like Spongebob, Nemo and Aquaman. Republicans maintain their myth that America is the best country, ever, in every category. And yet we manage to have the most expensive health care system on the planet, juxtaposed to one of the highest infant mortality rates. Winning! …well, we are number one if you flip the chart.

According to the right, we can do no wrong and according to the left we can no right. Of course the reality is that we’re a mixed bag but, make no mistake, sides are being chosen. I stand with those who understand the problems of our time and choose to ineffectually address them…from Starbucks. You keep sipping the Kool Aid, Pokey, and I’ll stick with the Frappuccino. It sure beats living in a delusional bubble that should have popped somewhere amidst the Carter Administration. You’ve missed a lot of memos. I started out as a pox on both your houses independent, and ultimately that’s where my political views reside, but if there’s only two sides in this game then I refuse to align myself with the clown car that you still insist is a political party. This myth is busted.