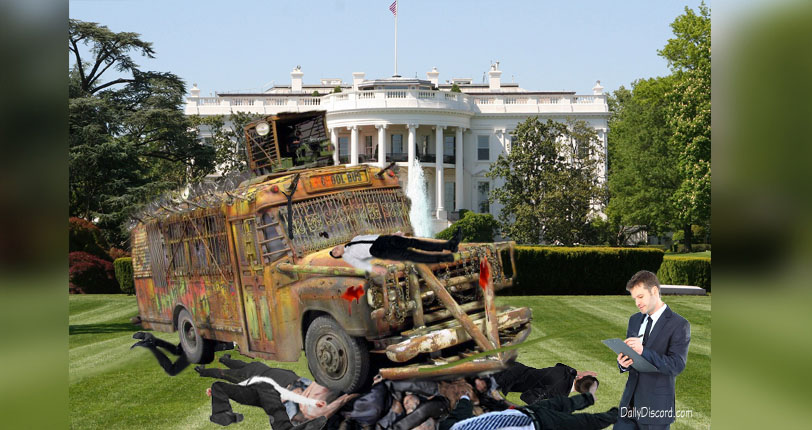 Tweet Tower—The Trump Administration feels the current White House bus is no longer adequate to keep up with the current demand. In a speech from the Rose Garden today, President Trump said, “You folks hired the ‘You’re Fired’ guy, so this shouldn’t be a surprise to anyone. I just reversed something Nikki Haley said at the UN the day after she said it. I also have Kelly, Pruitt, Carson, and many others on deck. Remember the movie Jaws? It’s like that. I looked out the window yesterday and I told my favorite staffer, Bob, or John, or Ted or something, we’re going to need a bigger bus. The biggest bus. The best bus!”

The Discord’s Chief White House Correspondent, Cokie McGrath, asked Donald Trump about the specific size of this bus and the president replied, “There’s this old movie about an atomic bus, the Big-Assed Bus or something, it’s going to have to be bigger than that. Remember that last chunk of ice that broke off Antarctica? That’s what I’m talking about. We might have to have Detroit stop what they’re doing and work on this project for a bit.”

Political statistician Nate Silver estimates that, should Trump win a second term, more of the Earth’s population will be under Trump’s bus than not by the 2022 midterm elections. Mr. Silver agrees with Trump on this much: “It will take a big-assed atomic bus, or something…”